Snarky British comedy mines the prick in all of us Oh, you are awful: Phoebe Waller-Bridge is a complete Fleabag

Tipsy, walking down the front steps of her childhood home, the titular character of British dark comedy Fleabag whips back around to her father, who's standing in the doorway. "I have a horrible feeling," she confesses, "that I'm a greedy, perverted, selfish, apathetic, cynical, depraved, morally bankrupt woman who can't even call herself a feminist."

"Well," Dad inhales, "you get all that from your mother." Ouch. "Good one," Fleabag shoots back.

Dad's backhanded zinger may sound cruel, until Fleabag's expression of half surprise suggests that "horrible feeling" may, in fact, not be totally unfounded. While barely into the show's first episode, it's obvious the eponymous protagonist's moral compass started buckling long before.

As portrayed by series creator and writer Phoebe Waller-Bridge (producer and writer behind BBC America's Killing Eve), Fleabag is the sex-obsessed owner of a guinea pig-themed cafe, a young Londoner with an urge to con: sexually, emotionally, materially. In the first episode alone, she lashes into a toothy, unlucky date after he rejects her advances (not before swiping some cash from his wallet, of course), and when her "perfect, anorexic supersister" Claire (Sian Clifford, tightly wound) goes in for a hug, Fleabag slaps her in a knee-jerk reaction. Later in the series, she even flirts with a dog. These transgressions are made all the more nasty or hilarious by Fleabag's ever-present side-glances and quips to the camera, speaking to the audience directly.

Fleabag's tragicomic crassness isn't unprovoked. She's broken up with her on-again, off-again boyfriend for the umpteenth time, and her cafe is failing. Her and Claire's mom died from breast cancer, and in a cruel twist of the knife, Dad (Bill Paterson) shacked up with their godmother, an insufferable artist played by a glacial Olivia Colman. At the crux, though, she's mourning the death of her best friend and former cafe co-owner, Boo, whose cause of death is initially a mystery. Then there's Fleabag's boozehound of a brother-in-law Martin (Another Period's Brett Gelman). "He's one of those men who is explosively sexually inappropriate with everyone but makes you feel bad if you take offense, because he was just being fun," she divulges in an aside, revolted yet ignorant of her and Martin's shared egregiousness.

It wasn't until well after its 2016 premiere on Amazon that I realized how often I rewatch Fleabag. The show's a riot, sure: smutty, deadpan, Fleabag's smirks always winking. But I never turn to it when in need of a laugh. Instead, I find myself hitting play out of validation: During bouts of remorse when – depending how "morally bankrupt" I'm feeling – I either want to feel a little less alone in my own "greedy, perverted" selfishness; or, on the other hand, need to be assuaged, "At least I'm not as depraved as Fleabag." We're all that asshole sometimes; we don't want to be that asshole most of the time; and assholery loves company all of the time. Fleabag is confiding in you, and only you, after all.

Waller-Bridge's character – miserable but still trying to figure her ish out – is nothing new in contemporary comedies, and neither is breaking the fourth wall (hello Malcolm in the Middle). "Bad girls" and "boss babes" slogging it through 21st century ennui and bullshit on the small screen doesn't feel entirely groundbreaking anymore, either (a phenomenon that, I should clarify, isn't something to grouse about). Hell, Fleabag's far from a diverse everywoman: She's white, posh, seemingly straight, and cisgender (just like her creator). But neither Fleabag nor Waller-Bridge have ever claimed their stories as being universal. Fleabag's doggedness and obsession with portraying one singular, confused woman's experience is what makes the show so brilliant. She is, no doubt, a uniquely botched soul.

Across the six-episode season 1, Fleabag proves that initial, biting, two-in-the-morning doorstep confessional to be true. However, in the heartbreaking season finale – when the backstory of Boo's death finally comes to light and we see just how deeply Fleabag's wedged in the doldrums of grief – it's clear she wants to be a better daughter, sister, lover; she just doesn't know how.

In the end, the swindler becomes the truth-teller, and she just needs us to listen. 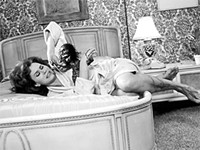