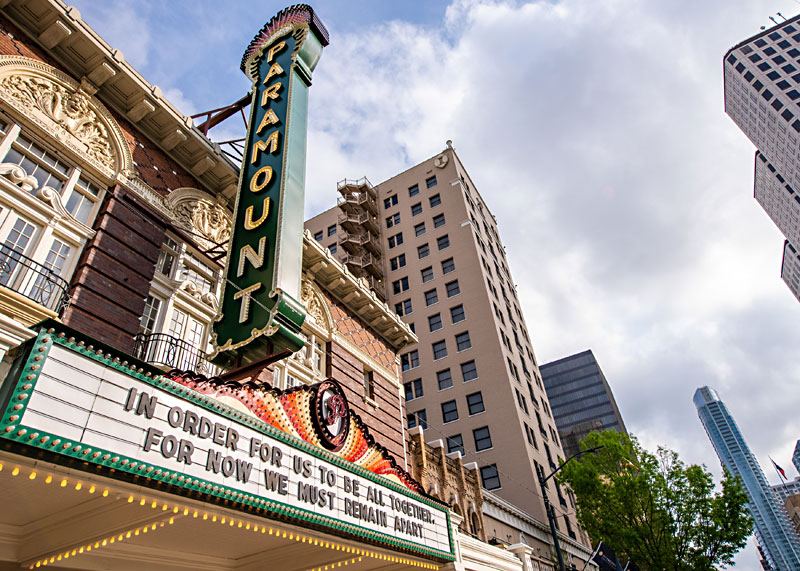 The Paramount Theatre speaks for all of Central Texas as we settle in for the COVID-19 outbreak. But social distancing doesn't mean turning our backs on others; as Mayor Steve Adler put it, "If we each do more than normal to stay connected, we can support our neighbors and friends. As we maintain physical distance, we need to work more closely together than we ever have before" to achieve recovery. (Photo by David Brendan Hall)

Against the backdrop of the widely criticized federal mishandling of the coronavirus crisis, state and local officials have doubled down to try to head off the rapid spread of COVID-19, the disease caused by the virus. Events have unfolded rapidly since Gov. Greg Abbott declared a state of disaster in Texas on Friday, March 13. As of Wednesday, March 18, when the Chronicle went to press, the Department of State Health Services reported 83 cases spread across 19 counties, although larger figures are being reported by some news outlets. At least three people have died in Texas.

Also on Friday, local officials broke the news that Travis County had its first two confirmed cases of COVID-19. By Wednesday, there were 23, and Austin Public Health has declared the city and county are now in Phase 5 of a five-phase pandemic response, with this caveat: "While Austin-Travis County DOES NOT have confirmation that we are in Phase 5 due to community spread, we should act as if we have knowledge that we are in Phase 5."

Nationally, confirmed cases grew from roughly 3,800 on Monday to more than 7,000 as of press time, with reported deaths climbing from 67 to 108, as reported by The Washington Post. (Different news outlets, which are tracking reported cases themselves because official federal information has proved inadequate, may have slightly different totals.) All 50 states now report cases. As alarming as these increases are, experts continue to warn that we are just beginning to see the damage this virus can do. To mitigate here the massive impacts that have been seen in Asia and Europe, health experts say we must all commit to social distancing – staying put and avoiding contact with others. Many people don't show symptoms; COVID-19 can travel along a chain of unaffected people until it sickens or kills someone. While young and healthy people are less likely to get sick from the virus, COVID-19 is potentially serious and life-threatening to people of any age. Its effects are most severe for people who are over 60, have a compromised or suppressed immune system, or who have existing conditions like diabetes or heart disease.

In light of this information, which global health authorities have been urgently trying to convey for several months, the scarcity of COVID-19 testing throughout the United States has sparked fierce criticism, and Texas is no different. On March 13, Gov. Greg Abbott said that just 220 people had been tested in the state for COVID-19 since the outbreak began weeks earlier, with an additional 75 in progress, and that the state's testing capacity was around 275 cases per day. As of press time, DSHS reports that 1,907 people have been tested in Texas, about two-thirds of those tests conducted in private labs. On Tuesday, Abbott said the capacity to test 10,000 Texans per week should be available by week's end, with further increases to come.

Locally, Austin Public Health on Wednesday announced that with greater testing capacity, dedicated testing sites will open for local residents – but by referral and appointment only. "Testing remains limited, and ... we must continue to prioritize testing for the immediate future [for people] such as health care workers, hospital patients, and individuals who live in nursing homes and those at high risk of complications," said Dr. Mark Escott, Austin-Travis County's interim health authority.

Experts say the testing surge, while helpful, is coming too late to prevent widespread transmission that is already occurring. In response to that reality, states and localities across the country have taken dramatic measures in the past week to control public behavior and reduce person-to-person contact. On Monday, the federal Centers for Disease Control and Prevention announced that for the next 15 days, all U.S. events of more than 10 people should be canceled or held virtually. In a press conference on Tuesday, President Trump reiterated that message and urged everyone to stay home and "enjoy your living room." On Wednesday, Mayor Steve Adler, Travis County Judge Sarah Eckhardt, and Escott issued orders to that effect.

The Impact on the System

Health care providers have updated visitation and admittance policies as Escott has issued new control orders. Since Friday, he has required all health care facilities in the county to screen patients, visitors, employees, and volunteers for COVID-19 symptoms and to have plans for isolating health workers if needed. Workers must also monitor their temperatures during their shifts.

Separately, Escott provided "critical advice" to those who know they have been in contact with someone with COVID-19, asking that they "self-monitor" (e.g., take their own temperature), generally self-isolate, and contact their providers if symptoms develop. Restaurants that are still offering take-out, drive-through, and delivery meals have been given orders to sanitize key surfaces hourly and implement policies to take workers who have a fever off the line. In a press briefing on Tuesday, Escott suggested that everyone take their temperature every day, especially if they must go out.

At least one of the persons who tested positive for COVID-19 is hospitalized at St. David's Medical Center in critical condition. In a statement, St. David's HealthCare president and CEO David Huffstutler said that the hospital is screening everyone who enters their facilities, and ensuring that staff wears personal protective equipment as needed and that patients suspected of having COVID-19 are isolated and separated from others. "We are also continuously evaluating our supply of personal protective equipment, and we are confident in our inventory," his statement said. St. David's has also implemented new visitor restrictions, allowing just one visitor per patient, and allowing an overnight visitor only in cases involving pediatrics, the Neonatal Intensive Care Unit (NICU), laboring mothers, patient advocates for pre- and postsurgery, and end-of-life care. On Wednesday, St. David's HealthCare announced that one of its practicing physicians is presumed to have COVID-19.

Many area providers are urging patients to use tele-health where possible and warning them that all visitors to clinics and hospitals will be screened. Testing decisions are still being made on a case-by-case basis and people who do not meet certain criteria will likely not be tested. Austin Regional Clinic issued a statement on March 14 saying its providers are developing plans and "preparing to offer telemedicine options." On Wednesday, ARC launched its own 24-hour COVID-19 hotline at 866/453-4525 offering advice on self-care and options for scheduling an appointment if needed; it has also implemented new visit safety protocols to screen and, as needed, separate patients to prevent virus spread.

Ascension Texas (which operates Dell Seton Medical Center) has established a COVID-19 hotline at 833/919-1680, which they say is available from 6am to midnight. "The hotline is staffed by registered nurses who will respond to public questions and implement the most up-to-date screenings and protocols to guide patients to the most appropriate care setting, including staying at home and/or virtual options," their website reads. Virtual care is being offered for $20 per visit.

CommUnityCare Health Centers also has a hotline, staffed with medical professionals who will triage uninsured Travis County residents experiencing COVID-19 symptoms including fever, a dry cough, and shortness of breath. People with no insurance and no established provider who are experiencing symptoms are encouraged to call CommUnityCare at 512/978-9015 to get advice. "The test for SARS-CoV-2 requires an order from a health provider, and is based on risk criteria. If you want to find out if a test is recommended for you, please call," said CommUnityCare president and CEO Jaeson Fournier in a statement. The hotline is staffed from 8am to 5pm, but hours could be extended if needed, Fournier said. The statement also addresses those concerned about their legal status: "For non-U.S. citizens and non-U.S. permanent residents, COVID-19-related testing, treatment or preventive care is not included in the new public charge test. This means COVID-19-related care will not negatively impact their path to citizenship, and [it] is permissible for a government program to pay for the test."

The Central Texas Veterans Health Care System has begun mandatory screenings at clinics and medical centers for those who have symptoms of respiratory illness. Residential facilities will also be strictly monitored, and a temporary "no visitor" policy has been adopted for some campuses, with exceptions for veterans in last stages of life on hospice units, the statement said.

The Austin Independent School District notified families on Sunday about several resources, including a virtual health care visit that is available without a copay, and options for tele-mental health services for students and families. Meanwhile, We Are Blood, the blood and tissue bank for Central Texans, is in dire need of blood donations after dozens of mobile blood drives have been canceled. The Chronicle reported on Monday that Central Texas hospitals could face blood shortages as early as next week if donations don't ramp up, according to We Are Blood's Nick Canedo, who stressed that donations can be made by appointment and are safe and sanitary.

In a tele-town hall on Sunday evening, state Rep. Eddie Rodriguez, D-Austin, brought experts together to answer questions from Central Texans, who called in to inquire about how COVID-19 is spread and how contagious it is, how prepared the region is to deal with it, and how bad it might get. The panel – including ARC president and CEO Dr. Anas Daghestani, DSHS Associate Commissioner of Regional & Local Health Operations Dave Gruber, Austin Public Health Director Dr. Stephanie Hayden, and Dr. Donald Murphey of the Texas Medical Association COVID-19 Task Force – noted that outcomes will depend on many factors, and there is much we still don't know about the virus, such as whether it will become less active in summer. But there was strong agreement that social distancing will be key to mitigating worst-case scenarios, even as callers worried that young people are still not taking the issue seriously. One caller wondered if she should even be concerned about getting sick if she had not traveled recently or been around someone who had. In response, Dr. Daghestani acknowledged that we are "beyond that point now" and that it's pretty clear that there is now community spread.

As Central Texans hunker down for the long haul, it's important to remember that this crisis won't last forever. But while it's here, social distancing remains the most important thing we can still do – along with scrupulous hygiene practices and not making unnecessary trips to the doctor or hospital. "Collectively and individually, we get to decide as a community what kind of spike we're going to have," said Adler on Tuesday. "We have control over whether ... we can space it out over time [and not] overtax the health care delivery system in our community; that's what we're striving for. But whether this works depends to a large degree on just how diligent we each are on the things we're being asked to do." 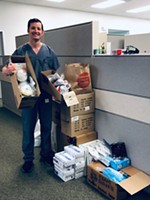 If You Have To Leave The House, Why Not Donate Blood?
Hospitals could face critical shortages as outbreak disrupts drives