Council: Heating Up the HOT Tax

Mayor moves to defend his solutions to the “Downtown Puzzle” 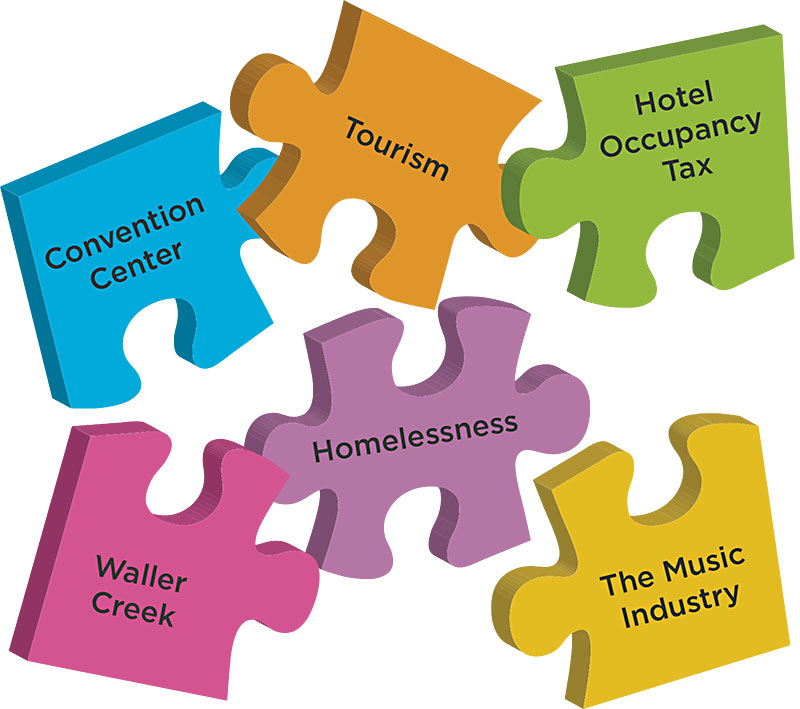 City Council won't lack for work today, Aug. 31, with a 100-plus-Item agenda that features the second public hearing on the budget, which – if the Aug. 17 hearing is any guide – will consume about three evening hours. That's if they first zoom through everything else on the list – which runs from special events regs to historic landmark commission voting standards (both contentious and postponed from earlier meetings).

That "-plus" detail is its own story: three Items from Council (101-103) are late additions: a couple of Items (101 & 103) addressing perennial Downtown issues, and the other (102) contemplating more city action on Senate Bill 4, the anti-immigrant law enacted by the latest Lege, and which officially takes effect on Friday, Sept. 1*. The city previously joined lawsuits contesting SB 4; this resolution, sponsored by Council Member Greg Casar (with Mayor Steve Adler and CMs Delia Garza and Ann Kit­chen) would direct staff to keep Council informed of all immigration enforcement actions the Austin Police Department or other city agencies engage in pursuant to SB 4.

Several Council members have been considering the growing HOT fund for needs beyond the Convention Center and tourism.

Leading into the week, the high-profile question was the potential fate of the mayor's "Downtown Puzzle," a multi-pronged, still-developing initiative to raise the Hotel Occupancy Tax, expand the Convention Center, facilitate a Tourism Public Improve­ment District (via Downtown hotels), and use the funding that generates to address Downtown homelessness, supplement the Waller Creek project, support heritage sites, and help sustain the local music industry. That's the nominal subject of Adler-sponsored Addendum Item 101 – which is more precisely a quick-strike response to Item 60, proposed by CM Ellen Troxclair, that would instead reallocate some of the existing HOT tax in the direction of cultural arts and parks ("Downtown Puzzle or Rubik's Cube?" Aug. 28).

The mayor and Troxclair exchanged salvos on the subject on the Council message board, and the fact that Kitchen appears as a co-sponsor on both (incompatible) resolutions suggests something of the dais divisions on the issue. There is not unanimous Council support for Convention Center expansion, and several CMs have been considering the growing HOT fund for needs beyond the CC and tourism promotion (where most of it goes now). Outside groups have been debating the issue, and some may turn up to raise the temperature – but the mayor has indicated he would like the entire discussion to wait until late Sep­tem­ber, after the conclusion of this year's budget adoption. If he prevails, today's proposals default to anti-climax.

There remains plenty of other business:

• That's So Special: The revised special events regulations (Item 17), simmering literally for years, return for second and third readings – featuring staff-annotated editions for council members who have long since forgotten the details and controversies (of the current crew, only Mayor Pro Tem Kathie Tovo was even on the dais during the 2013 first reading; perhaps she can sing the original chorus).

• Dripping Effluent Springs?: Item 15 denotes "discussion and possible action" concerning the City of Dripping Springs' pending permit from the Texas Commission on Environmental Quality to discharge treated wastewater into the Walnut Springs Tributary and Onion Creek; thus far, neither resident opposition nor neighboring (i.e., Austin) pleas have dissuaded Dripping Springs officials from their fallback plan for land application. What more Austin can do is unclear.

• No Place Like ...: In addition to the mayor's Downtown Puzzle project, several Items take aim in various ways at homelessness or related issues. Item 54 proposes to pilot a "temporary work" project for homeless folks; Item 59 would research ways to substitute for "panhandling" other fundraising efforts for people on the street; Item 103 would disconnect the mayor's TPID initiative from the larger "Puzzle" and direct funding from that or the Waller Creek TIF (tax increment financing) to homeless initiatives (although both of those initiatives are primarily commercial projects).

If y'all come down to testify on the proposed budget or the property tax rate (likely to commence in the evening), you might find a few other things to discuss. Special invitations extended to puzzle mavens.

In a Wednesday ruling (after this story went to press), U.S. Judge Orlando Garcia blocked major portions of Senate Bill 4, which means it will not go into effect as planned on Sept. 1. Read Mary Tuma’s update.