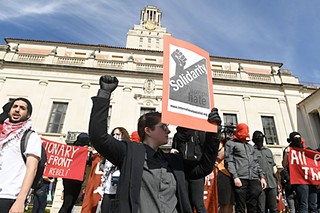 Demonstrations against Donald Trump's administration began locally around noon on Friday, Jan. 20. The first popped up on the University of Texas campus, where about 400 students, faculty, and staff gathered at the Tower before marching south toward Auditorium Shores. There, they merged with One Resistance, Friday's cornerstone event, which presented a bilingual coalition (English and Spanish) against Trump's stances on immigration, labor, women's rights, and queer rights. City Council Member Greg Casar, an outspoken Trump opponent, estimated that there were between 4,000 and 5,000 involved in that rally. Attendees at Friday night's LGBTQ Human Rights Rally continued the city's march on the Capitol. Lisa Kettyle, one of the rally's organizers, offered an estimate of 800 attendees. She and her crew were "overwhelmed with emotion by the turnout."

The One Resistance Rally Friday night (Photo by Jana Birchum)

Saturday's Women's March on Austin – one of 600 protests put on in coordination with the massive Women's March on Washington – capped the weekend rallies. Protesters "join[ed] in diversity," to pull a line from the march's mission, and stood together in recognition that "defending the most marginalized among us is defending all of us." Melissa Fiero, lead organizer of Saturday's march, said local planners are confident that participation numbers surpassed 50,000, though some have suggested up to 100,000 people marched. Fiero told the Chronicle it was "reassuring to see people come out en masse to have their voices heard and speak out in support of human rights for all."

Fiero said plans for the march began in late November with nine strangers sitting around her kitchen table. It grew to become what many are considering the largest protest in state history, with public figures like U.S. Rep. Lloyd Doggett, former Austin Mayor Pro Tem Sheryl Cole, Planned Parenthood Texas Executive Director Yvonne Gutierrez, and former state Sen. Wendy Davis all taking the stage for speeches. "When we remain silent we all participate in our own marginalization," Davis told the crowd. "The demand [for equality] should not come from just women, and I'm so happy to see so many men here today."

It was a peaceful weekend, with Austin Police reporting zero arrests from any participants of the four marches. (One man was arrested for assaulting a demonstrator during Saturday's march.) Austin-Travis Coun­ty Emergency Medical Services reported 30-45 treated patients on Satur­day; 15 individuals were transported to local hospitals.

Shortly after the rally, the national Women's March revealed plans for its next campaign, one they're hailing as "10 Actions for the First 100 Days." Organizers hoping to capitalize on Saturday's momentum will announce a new action every 10 days for the first 100 days of Trump's reign. The first recommends participants write postcards to local senators listing their issues of personal concern. Several local meetups are scheduled in that vein for this weekend; see "This Week's Rallies" online for details. 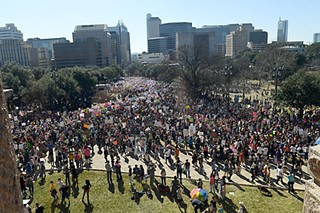 Fiero says she plans to meet with co-organizers to debrief and plan a continued effort moving forward. She hopes to connect with big-time activist organizations to help "harness this energy." In the few days that have passed, Kettyle said she and her co-organizers have received "a ton" of thank you messages "telling us they feel empowered to go out and do something themselves, which was our ultimate hope."

Fighting for 15, and Against Andy Puzder 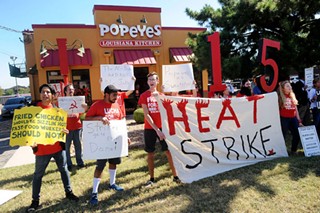 Though it paled in comparison to the weekend's other protests, the 30 fast food workers and allies (from the Fight for 15 movement) who gathered in front of the Carl's Jr. on Slaughter Lane on Friday, several hours before Trump took the oath of office, were enough to get Casar "pumped up" about the resistance. Government neglect of workers is hardly new, he noted, but Trump's proposed labor secretary, Andy Puzder, CEO of the parent company of both Hardee's and Carl's Jr., represents a particularly intense hostility toward workers' rights. In addition to overseeing a company accused of wage and hour violations, Puzder openly fantasizes about the day he can replace his workers with robots, citing, among other reasons, "there's never a slip-and-fall, or an age, sex, or race discrimination case."

Friday marked the first time Rydell Early and Rochell Bryant, a couple who both work at a local Whataburger, had gone on strike or protested. Early makes $11.50 an hour while Bryant makes $9.50 – even though Bryant has been there longer and they agree she does the same work he does, despite a different title. Neither voted in the November election, but Early, who described his upbringing as that of a "stereotypical urban kid," dealing with poverty and getting involved with gangs, said he was inspired to take action after being approached by a Fight for 15 organizer with similar life experiences.

"It was awesome that he even approached me with a situation like this," he said. "I feel blessed." – Jack Craver

A version of this article appeared in print on January 27, 2017 with the headline: Keep Marching!