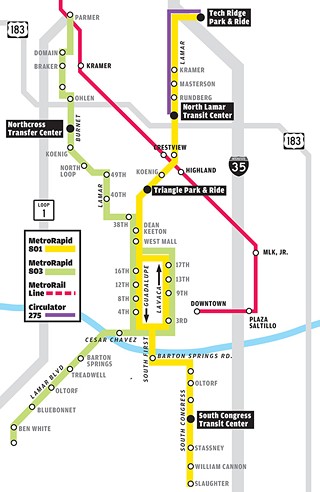 So what's the deal with those weird accordion buses? That's a MetroRapid bus, part of the new bus rapid transit (BRT) system. Capital Metro won a $38 million federal grant in 2012, and some of that has gone to buy 22 of these 60-foot buses. They're able to carry more passengers than the regular 40-foot buses: 101, rather than 78.

Why do they have that funny bendy straw bit in the middle? So they can turn corners more easily.

Where will they be going? There's a new route – the 801 North Lamar/South Congress – running from Tech Ridge, down Lamar/Guadalupe to Downtown, then over the river, along Riverside to Congress, and then down Congress to Southpark Meadows. The plan is that, with fewer stops and more seats, they'll be faster than the regular bus service.

How often will they run? Weekdays, every 12 to 20 minutes, rising to every 10 minutes during rush hour. Over the weekend that'll go down to every 20 to 30 minutes. The really good news is that Cap Metro is finally starting to extend its hours a little bit: The 801 will run weekdays from 5am–1am, Saturdays 6am-12mid, Sundays 7am-11pm.

Won't they still just get stuck in Austin's traffic? They're buses, not helicopters. However, they will be able to communicate with the traffic lights at intersections, getting them to stay green for a few seconds longer to allow them to pass. There will also be designated bus lanes Downtown.

Why so expensive? Considering that a day pass is $3 in Houston and $5 in Dallas, it's actually pretty competitive. Still, it's more expensive than the regular buses – they're only a buck: This is a commuter service, which is why there will be wi-fi. Travelers will also be able to use mobile ticketing, instead of lining up at the grocery store to buy monthly passes.

Sounds fancy: It's supposed to. The 1L is one of the most used routes in Cap Metro's system, but it's often overcrowded and dirty. The reduced number of stops and higher prices, plus all the extras, is Cap Metro's way of attracting more business commuters.

Is this why I'm seeing these new fancy stops around town? Those aren't "stops": In official BRT lingo, they're "stations." They'll have real-time bus tracking and display screens, which Cap Metro promises will mean arrival times updated every 90 seconds.

But aren't there fewer of those stations than there are the old stops? That's one of the big points of controversy. In the urban core, there's a stop every two to three blocks; the MetroRapid stations can be up to a mile apart.

So what does that mean for urban-core users? Currently, there's either a 1L or a 1M every 13 minutes during the daytime. The 1 will still use regular stops, but will only run only once every 26 to 60 minutes, while the 801 uses only the new stations.

Will any other routes be affected? Yes. Down­town, three routes will be moved. The 7 Duval/Dove Springs and 20 Manor/Riverside will move from Con­gress to Guadalupe/Lavaca. The 17 Cesar Chavez, which currently loops around Brazos and Con­gress between Cesar Chavez and 11th, will go up Red River, along Eighth, down Guadalupe and San Antonio, and across Cesar Chavez.

I used to take the 1L to work, but I don't want to take the 801: How will I get to Tech Ridge? There'll be a new circulator route, the 275 North Lamar, running from North Lamar Transit Center to Howard Lane.

Will there be more MetroRapid? Yes. Cap Metro plans to introduce the 803 Burnet/South Lamar late this summer. This will replace another very popular route, the 3. However, unlike the 801, which will still have the 1 to provide regular service, the 803 will completely replace the current route. Also, they won't be using the bendy buses: They'll be the regular 40-foot length, not the flexible 60-footers, just with all the mod cons.