Under the Hood Celebrates Hoodstock at JAX

On the 11th anniversary of war in Afghanistan, help a military resource center stay afloat

Courtesy Under the Hood Cafe and Outreach Center

Hoodstock Benefit for Under the Hood Cafe


"We're in for the long haul," said Jim Tur­pin, a volunteer at Under the Hood Cafe and Outreach Center. On Sunday, Oct. 7, the 11th* anniversary of the war in Afghan­i­stan, the cafe will hold an Austin fundraiser – called Hoodstock – to support its military outreach program. "It's incredibly important," Turpin said, "that the cafe stay open."

Under the Hood Cafe is modeled after the late 1960s anti-war cafe The Oleo Strut, which was also based near Fort Hood, and helped GIs returning from Vietnam. Today, Under the Hood is one of only three anti-war veterans cafes in the world. With only one paid employee, Under the Hood is a largely volunteer nonprofit supported by several veterans' organizations, the most visible being the Iraq Veterans Against War, active at the cafe since its opening in March 2009. Its patrons include both active military and veterans, as well as family, friends, and community advocates who want to talk about the peace movement, inadequacies in military health care, and the redeployment of soldiers who are not fully recovered. "There's been a tsunami of soldiers coming back – active duty and vets," Turpin explained, "[who] are not getting the mental and behavioral health care they need."

According to the Department of Veterans Affairs, in 2010, 18 veterans committed suicide each day. The link between military suicides and post-traumatic stress disorder has been firmly established and the military is struggling to cope with the numbers of affected soldiers.

"We're talking hundreds of thousands coming back with PTSD," Turpin said. "What we've been telling the brass at Fort Hood and around the country is 'stop redeploying traumatized troops.' When you do that over and over again, your suicide rates go through the roof. There [are] not enough counselors for the amount of soldiers coming back."

That's where Under the Hood comes in. As a nonmilitary safe space, the cafe allows open discussion and provides GI rights information, referrals for wellness services, and creative workshops such as Warrior Writers, in which soldiers and veterans come together to write or draw about their experiences. In addition, Under the Hood gives legal referrals that sometimes help soldiers achieve "conscientious objector" status, allowing them to leave the military for religious or ethical reasons. "Most are just happy to get into a nonmilitary place and find that another service member has had the same experience," Turpin said. "They know that vet has been where they've been, and it's incredibly powerful." That understanding is something the public can't share, because 99% of the population hasn't served: "This has been an invisible war for the American public," Turpin said.

On Oct. 7, it's the Austin public's chance to help the troops. The Fourth Annual Hood­stock will be at JAX Neighborhood Cafe. Hoodstock will be headlined by the Djem­babes, Huerta Culture, and Schmillion. The night will also feature various speakers, a silent auction, and Under the Hood merchandise. A $10 donation is suggested at the door, and all proceeds will benefit the Under the Hood Cafe & Outreach Center.

*Correction: A previous version of this story listed the incorrect anniversary for the war in Afghanistan.

READ MORE
More Under the Hood 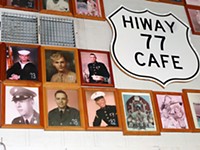