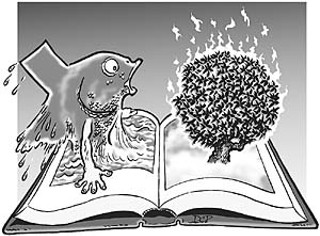 In what turned out to be something of an anticlimax, the State Board of Education voted last week to approve adoption of all 11 of the high school biology textbooks recommended by Texas Education Agency staff, following professional and public review. After months of high-profile debates over the treatment of evolution in the various texts, both supporters and opponents had been expecting at least some debating fireworks. And because several newly elected members had joined the board this year, few observers cared to predict the final outcome.

But in last Thursday's preliminary vote (confirmed Friday), the fireworks were all procedural. A motion by Beaumont's David Bradley to discuss the books individually was defeated 11-4, and subsequent motions by Mavis Knight of Dallas to close debate and then to approve the books as a group passed by the same margin. Bradley was joined only by Terri Leo (Spring), Don McElroy (Bryan), and Gail Lowe (Lampasas). Board Chair Geraldine "Tincy" Miller insisted, "We have had many opportunities in the last year to look at these books and study them. ... Now is the time to vote."

"This is great news for the children of Texas," said Samantha Smoot of the Texas Freedom Network, a statewide group active on education and religious freedom issues. "The board sent a clear message that educational and scientific standards come first for Texas schools, not the ideological preferences of a few people."

Bradley told reporters he had hoped the board would reject, or at least qualify its approval for, nine of the 11 texts. He argued that those books are "nonconforming" to state standards because they are insufficiently critical of historical errors in the development of evolutionary theory. (Any books ruled "nonconforming" would be at a strong disadvantage at the school district level, because the state will not reimburse districts for the purchase of nonconforming texts.) Prior to the vote, McElroy had recorded his objections to evolutionary theory in an e-mail to supporters, saying, "Given all the time in the world, I don't think I could make a spider out of a rock. However, most of the books we are considering adopting, claim that Nothing made a spider out of a rock."

Most of the attacks on the textbooks made similarly creationist arguments against evolution, although the Seattle-based Discovery Institute, a conservative think tank leading a national campaign in support of "intelligent design," insists that opponents want only to eliminate "errors" in the Texas textbooks. Following the SBOE action, the institute declared a "last-minute victory [for] textbook reformers" because prior to Friday's confirming vote, TEA head Robert Scott told board members that any additional errors would be corrected by publishers before the texts are distributed to school districts. But the board's strong vote marks a public defeat for those demanding that the board reject any textbooks critics deemed insufficiently critical of evolution or failing to present the "other side."

Dozens of Texas scientists, teachers, parents, and clergy had testified in public hearings in support of the textbooks and of evolutionary theory as the organizing paradigm of the biological sciences. Dr. Alfred Gilman, a professor at UT's Southwestern Medical Center in Dallas and a Nobel Laureate in medicine, called the SBOE decision a very important vote in defense of scientific education. "The people from the Discovery Institute have tried to invent a 'theory in crisis' concerning evolution," said Gilman. "This is propagandistic nonsense. Evolution is not a theory in crisis -- it's the foundation, the cornerstone, of biology." He said opponents' attempts to magnify what they call "errors" in the experimental history amount to "making mountains out of molehills."

"They no longer make explicitly religious arguments against evolution," Gilman continued, "because they know they've been beaten on that one. But we should not dignify their pseudoscience by agreeing that these so-called weaknesses are scientific 'errors.' No textbook is perfect, but they're just looking for excuses to throw the baby out with the bathwater."