ON THE COVER:
Will Women Have a Voice at the New Women's Hospital?
news

Will Women Have a Voice at the New Women's Hospital?

Midwives and the Law in Texas

The City, the New Women's Hospital, and UTMB

The midwifery debate is not new in Austin -- a Chronicle reprint from June 18, 1993

Midwives: From L.A. to Santa Fe

The legal state of midwifery (Chronicle reprint from 1993)

An experience with a midwife -- a Chronicle reprint from 1993

Planned Parenthood Says Its Future Is Set in Stone

Did Farmers Insurance Keep Secrets From the State?

The retailer wins a round on points: 4-3.

Council unanimously OKs another Beastcenter -- and a study of the big box invasion.

Local leaders want your input on an extensive -- and potentially controversial -- list of smog-fighting strategies.

The local UW and BSA affiliates part ways over the scouts' anti-gay rules.

The ARA and business owners close in on a (shared?) vision.

Three inhaled -- but only one (a different one) supports decriminalization

The war on drugs attacks poor Bolivian farmers, not drug kingpins; and Halliburton still has its snout in the war trough. 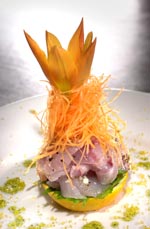 Young chef / owner Tyson Cole has Uchi right where he -- and probably everyone else -- wants it.

There's something enduring about a bakery. The smell of fresh coffee, the sugar-tinged, yeasty aroma that twines through the air, warmly embraces you, and evokes carefree Sunday mornings. Russell's in Northwest Hills is no exception.
music

New West: Out of the Woods

Other Imprints: Out of the Cellar

Conrad Keely and Juliette Lewis? Getting it on with the Trail of Dead, Frenchie, Cheap Trick, the Austin Music Commission, and our own Todd V. Wolfson.

the Hot Club of Cowtown

A Kiss in Time

Snakes in My Veins

Strange Noise in the Dark

I Love You But I've Chosen Darkness, Total Information Awareness, Haunted Rollercoaster, In the Lines, Makin' It in the Scene, To All the Trick-or-Treaters

Live From the Cactus Cafe
screens

Bennett Singer and Nancy Kates' Brother Outsider gets inside the life of a civil rights lion.

TO: America; FROM: The BBC

Subject: FWD: 'The Office' on DVD

They can make movies, but can they cut a cake?

Credit where credit is due: Bill Broyles takes on Brian Grazer in The New Yorker.

Just say no to free speech.

This French sex comedy was not reviewed at press time.

The Flower of Evil

Chabrol's 50th movie is a study of guilt and its perpetuation.

Girls Will Be Girls

Valley of the Dolls meets Female Trouble in this all-male semimusical romp.

Despite some terrific moments, Philip Roth's words fail to stick to the screen.

The Legend of Johnny Lingo

This G-rated story about an orphaned Polynesian boy was not reviewed at press time.

Looney Tunes: Back in Action

Riotous comedy mixes live-action and animation for a great result.

Master and Commander: The Far Side of the World

It's a Russell Crowe's nest of a performance in this seafaring adventure.

Once Upon a Time in the Midlands

British romantic tale uses the gunslinger mythos as a means to explore romance and regret.

Inside and Outside the Curatorial Box

Husband and wife curators Gabriel Pérez-Barreiro and Regine Basha discuss the art of their profession.

Where Cement Is Beautiful and Cranes Are Elegant

The Texas realism and pop-art imagery shared by Sodalitas and Brian Bowers make their pairing at Davis Gallery good sense.

In her painting Katherine, Katy O'Connor portrays the subject's relationship to her purse such a way as to suggest multiple possibilities, questions left unanswered, which makes the work unusually intriguing.

The Elisabet Ney Museum is headed for a makeover, Austin photographer Sean Perry takes the prize in New Mexico, and Chronicle arts writer Barry Pineo gets a publishing deal for an acting book.

Local theatre genius Ron Berry and his talented friends of the Refraction Arts Project have turned the Blue Theater into a snowed-under tundra, with an amazing array of multimedia effects, live performers, sounds, and moments real and imagined, all inspired by the frozen North.

The Woman in Black

The power of little things to make spirits real drives The Woman in Black, a terrifically old-fashioned ghost story in the English tradition, and the State Theater Company production employs simple sights and sounds in effective ways that make us believe and be terrified.

The Planned Parenthood construction boycott is thuggery, pure and simple; conservatives' hysteria about Bush-bashing is ahistorical and largely fantasy-based.

The cancellation of The Reagans by CBS was an act of cowardice in the face of noise from the afar-right banshees.

Get lost in the Sweet Berry Farm maze.

Is salmon calcitonin as worrisome as Fosamax?