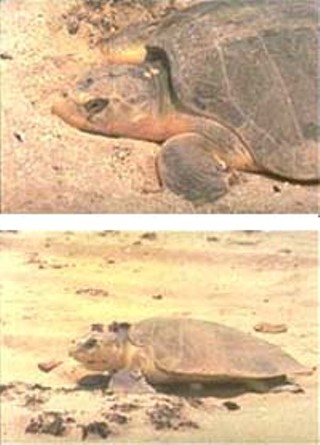 Sea turtle advocates, most recently seen dressed as turtles themselves and shouting down the World Trade Organization in Seattle, say Gov. George W. Bush must do more to protect the charismatic amphibians that inhabit Texas waters. Noting that 1999 has seen record numbers of dead and injured sea turtles wash up on the Gulf Coast, the San Francisco-based Sea Turtle Restoration Project hopes that renewed attention to the issue will help convince the Republican presidential frontrunner to restrict shrimp fishing in state waters.

"These turtles are extremely endangered," says Teri Shore of the STRP. "I think if bald eagles were washing up on Texas beaches, the governor's office would be taking a different position. Every American who watches TV knows that sea turtles are endangered, and that's why we're asking Gov. Bush to take a stand." The group, which is calling for a marine preserve extending nine miles off the Texas coast, has drawn support from the Humane Society and Houston's Helping Endangered Animals Ridley Turtles (HEART). The three organizations have also petitioned the U.S. Coast Guard, requesting a sanctuary off South Padre Island for the most endangered species of sea turtle, the Kemp's Ridley.

Such requests are indeed timely -- but for reasons that may have escaped the California turtle advocates. Last year, the Texas Parks and Wildlife Dept. announced that it would be reviewing shrimping regulations to help establish a more sustainable approach to fishing and to further protect sea turtles. TPWD expects to come out with a plan within the next six months or so. "Our greatest concern is the shrimp industry," says coastal fisheries director Hal Osborn, "but embedded within that is the turtle issue, and embedded within that is whether we will establish some sort of preserve.

"We've been in a discussion with all the stakeholders, including the environmental community, shrimpers, and recreational fishermen, trying to determine what the perfect shrimp fishery might look like," continues Osborn. In addition to protecting turtles, he says, the issue of by-catch must be addressed. "Right now, there's four pounds of by-catch for every pound of shrimp caught. That obviously includes turtles, but it also includes many fish and other vertebrate and invertebrate species," he says.

This year, meanwhile, TPWD deputized its game wardens so they could board shrimp trawlers and make sure the boats were in compliance with current regulations designed to protect the seven turtle species that frequent Texas waters, all of which are protected under the Endangered Species Act. Specifically, shrimp trawlers are required to use Turtle Exclusion Devices (TEDs), metal grates that prevent turtles from getting caught in shrimping nets. Since the beginning of the year, state game wardens boarded 431 boats, issuing 68 warnings and 10 citations for TED violations.

Pointing to the number of turtles stranded on Texas beaches, though, Shore says that this is not enough. She argues that the only way to truly protect sea turtles is to keep shrimp boats out of the waters where they live. For 1999, the Texas Sea Turtle Stranding Network has counted 435 injured or dead turtles so far; of those, 212 were members of a threatened species called loggerheads, and another 91 were the "critically endangered" Kemp's Ridleys. "Enforcement and monitoring doesn't work," Shore says. "Preservation needs to come before profits."

Osborn counters that the number of stranded, dead, and injured turtles can be misleading, and may actually reflect the fact that turtle populations across the board are increasing. Despite an 8% increase in the overall turtle population since last year, he says, the number of beached Kemp's Ridleys has dropped nearly 46% when compared to a five-year average. They're also being counted at higher numbers on the Mexican beaches where they nest. Loggerheads, he acknowledges, have seen a spike in deaths and injuries, but that could be the result of ecological patterns resulting in increased interactions between fishermen and turtles. Osborn also acknowledges that most turtle mortality seems to stem from shrimp operations, a $600 million-per-year industry in Texas.

Mainstream Texas environmentalists, though concerned about the fate of sea turtles, have so far remained silent on the issue of preserves. A spokeswoman for the Texas Audubon Society says that "the number of turtles turning up on the beaches is absolutely unacceptable," but stops short of calling for a preserve. "I'd like to see what Texas Parks and Wildlife is going to do," she says. Brian Sybert of the Lone Star Chapter of the Sierra Club says that the shrimp regulatory review will allow conservationists to address various concerns, including turtle preservation, but that his group will not be setting forth a public position until later this year.