The Far Out Lounge & Stage, Saturday 9

"If you knew about Liberty Lunch, then there is nothing to explain," the venue's longtime co-owner Mark Pratz explained in a statement. "If you never knew Liberty Lunch, then this is your chance to experience a little of the iconic venue that lives on ... and on ... and on." True enough. Liberty Lunch, the former lumber yard at 405 W. Second, was the single most inclusive, welcoming presence in Austin music from the late Seventies until closing its doors July 31, 1999, at the behest of the city of Austin, the property's landlords. A hugely popular, highly active Facebook tribute page reinvigorates some of that magic on Saturday at the one modern venue to encompass Liberty Lunch's spirit, the Far Out. In addition to the many figures seemingly emerging from Austin musical history to honor Pratz and J'Net Ward's mythic stage – including the Tail Gators, Kathy McCarty, LeRoi Brothers, Shoulders, Extreme Heat, Uranium Savages, Dumptruck, and Doctors' Mob – a silent auction contributes to the proceeds benefiting HOME and the SIMS Foundation. The only way the event could be more Liberty Lunch would be if every band in Austin turned up to play "Sweet Jane" all night long.  – Tim Stegall


"Poseur," of course, is the rhetorical battle-axe most commonly wielded by asshole metal gatekeepers. It's also literally true in the case of Poppy (and also not an insult), the conceptually minded YouTube émigré for whom heavy music is the final(?) nodule in a pop-star character arc that began in 2015 with sarcastically peppy synth-bops. Call it a testament to the sincerity inherent to metal songwriting that her music has simultaneously traversed from arch satire to achingly personal (and distinctly female) rage. Her recent songs find expression for their anxiety in the shifting sonic instability of alt-inflected nü metal – ideal for clapping back at aforementioned asshole gatekeepers.  – Julian Towers

Hole in the Wall, Sunday 10


Honor the family members once kicked out of the house for listening to heavy metal with Sunday's unholy trifecta of local stoner/doom/sludge at Hole in the Wall, where three local rock outfits generously (no cover) play alongside Tulsa-based hazy riffers Dust Lord. Misalign your chakras with a sound bath of distortion with the pulverizers three, Monte Luna – what motorcycles would sound like if they sounded cool. Get dragged to hell by the dry larynxy shouts from Throat Piss, and enjoy Dust Lord's generally sloth-paced, head-nod-inducing, evil sounds of the evening on their third and last Texas tour stop.  – Christina Garcia


A year after the release of Smiling With No Teeth, a fine-tuned delight of freewheeling avant-funk, Genesis Owusu finally tours his March 2021 debut LP in the states. Already selling out major cities, the Ghanaian Australian singer recently displayed his smooth falsetto with woozy single "Gold Chains" on Stephen Colbert. In waves of post-punk intensity and retrofuturist hip-hop, the groovy conceptual piece cites Prince and Talking Heads inspiration, while focusing on formative experiences of depression and racism. Prior, shapeshifting Austin rapper Mike Melinoe carries the sinister sheen of latest EP Mur Idaw, including the persistent, lighter-flicking "Floss."  – Rachel Rascoe 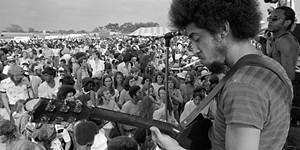