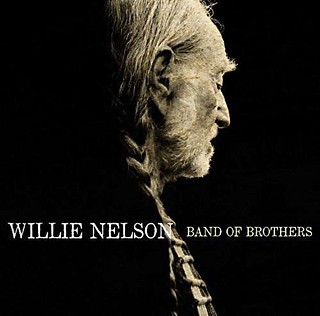 "Well, it seems that I've been here before/ So if this means that there is more – bring it on." So intones a familiar, reedy voice, none the worse for wear over 81 years and delivering the titular punch line with characteristic Lone Star Zen: laissez-faire delivery of steel resolve. Halfway through the first verse of the first song on the first album of predominantly self-penned material since 1996, Willie Nelson sounds downright pugilistic. On the occasion of his last set of originals, Spirit (inhale "Twisted Williemania," Feb. 9, 1996), Abbott's favorite son invited us aboard his bus the Honeysuckle Rose after having just been dropped by his label of 18 years, Columbia Records. For the better part of the next two decades, he then concentrated on his Louis Armstrong-like interpretive and duet skills – anyone, anytime, any place – occasionally hitting when paired with a Toby Keith ("Beer for My Horses"). Now, Nelson's Band of Brothers debuts at No. 1 on Billboard's Country Albums rankings and No. 5 overall, breaking several of his own career highs. All he needed to revive his commercial fortunes was to obey his calling: songwriting. Remember, having penned deathless standards including "Hello, Walls," "Crazy," "Night Life," and "Funny How Time Slips Away," the Red-Headed Stranger didn't make his name on his braids. While Band of Brothers' new ones are co-writes with the producer Buddy Cannon, the lyrics are clearly Nelson's, which taken as a whole constitute as deeply personal a document as any he's authored. One key track, "Guitar in the Corner," acknowledges writer's block before turning it into a metaphor for a faltering relationship: "There's a guitar in the corner/ That used to have a song/ I would hold it while it played me/ And I would sing along." Two plays later, Nelson's hitting "The Wall," singing of spending "Half my life ridin' on a rocket/ One world to the next then on and on," afterward resolving to make improvements: "Taking things to make it make me better/ Remembering things I never knew I'd knew." Accompanying Western grooves that harness all the compositions into a cohesive ride – each accessorized with the bandleader's Django Reinhardt-loving acoustic guitar solos – most of the lyrics speak of broken-down romance, with lines as telling as those in "Send Me a Picture" ("Send me a picture when we were together/ When we held the world in the palm of our hands/ When life had a future forever and ever"). Elsewhere, his interpretive muscles flex hard, as with Billy Joe Shaver's modern country protest, "Hard to Be an Outlaw": "Singin' 'bout the back roads that they never have been down/ They go and call it country but that ain't the way it sounds". Even then, Band of Brothers belongs solely to Willie Nelson. This is the sound of rust being ground out, cylinders squeaking back to life, engines and carburetors opening wide on the road again.