Sounds From Down Under

There's not a rotten orange in this barrel of bright, young Australian talents. Adelaide rockers Wolf & Cub went underground a bit after their 2006 debut Vessels and re-emerged three years later with the Chris Colonna-produced Science & Sorcery, which straddles the line between pure rawk and club music. Twee folk-rockers An Horse build anticipation for their forthcoming Walls (Mom + Pop), due out in April. Sydney's Cloud Control, whose dreamy-jangly clap-rock is sure to inspire a group sing-along, knocked it out of the park with their 2010 debut, Bliss Release (Ivy League Records). Melbourne's Washington channels Berlin as produced by Phil Spector. Sydney's female-fronted quartet the Jezabels specializes in big, orchestrated feelings that would be right at home on any Twilight movie soundtrack. Topping off the evening are two surefire calorie burners: Sydney trio Art vs. Science does for post-millennial dance-punk what Devo did for sexually frustrated nerds in the 1980s, while pop whippersnappers Operator Please, hailing from the tourist-friendly Gold Coast, conjure up neon-hued high school hallucinations. – Melanie Haupt 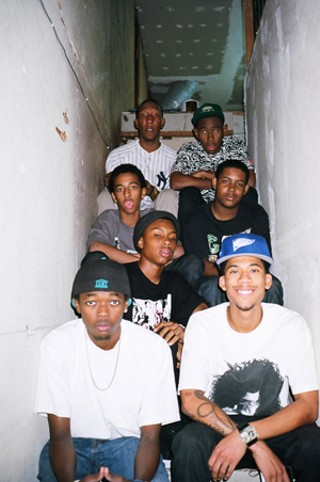 Any line running out the door of Buffalo Billiards will be shorter than what this lineup deserves. Of the eight acts shaking down this showcase, six can lay claim to putting out dope music in 2010. Dropping "Country Shit" on K.R.I.T. Wuz Here, Mississippi maniac Big K.R.I.T. might have cast the first stone in dethroning David Banner. NOLA contemporary Curren$y took stoner rap by storm with Pilot Talk and Pilot Talk II. Elsewhere, Black Milk pushed the limits of Detroit oomph with Album of the Year; Odd Future put out between 10 and 30 albums, all for free and without your parents' tastes in mind; and Tanya Morgan's Donwill and Von Pea both released solo albums, Don Cusack in High Fidelity and Pea's Gotta Have It. The other guy, Cyhi Da Prynce, all he did was drop the illest verse on Kanye's "So Appalled." – Chase Hoffberger

Less than six degrees separate most of this showcase for Dirtnap, Portland, Ore.'s preeminent purveyor of underground punk. Marked Men's Mark Ryan casts spells early as Mind Spiders. His new solo venture's eponymous debut is one of the most oddly memorable records of recent memory, four-track gems and 1960s doo-wop with sci-fi swirls and a wicked cover of Buddy Holly's "Slippin' and Slidin'." The album features contributions from Bad Sports, a must-see Denton power trio that pits the Fleshlights' firecracker rock & roll against the confrontational theatrics of OBN III's on the band's upcoming second album. Ryan also does the blitzkrieg bop in High Tension Wires, a high-octane side project with Mike Wiebe of the Riverboat Gamblers, whose recent third LP, Welcome New Machine, could pass as a greatest hits with instant two-minute classics in "Get Weird" and "Backbone." Before that North Texas trifecta, Houston's Something Fierce previews the spiked punk-pop punch of the upcoming Don't Be So Cruel, not far removed from Alicja Trout's Memphis shredders River City Tanlines. Ottawa's Steve Adamyk Band and White Wires yield a kamikaze singles party and beach party fuzz, respectively, while Portland's excellent Mean Jeans handles cleanup duty. – Austin Powell

Taj Weekes & Adowa (12mid) hail from St. Lucia where they absorbed the soca sounds of Lord Kitchener and the Mighty Sparrow, A Waterlogged Soul Kitchen their latest. From Johannesburg, South Africa, Tidal Waves (11pm) specializes in original roots reggae with the influence of traditional African sounds like mbaqanga and maskandi. Black Gandhi (10pm), from Barcelona, Spain, has been sweeping across Europe in recent years delivering message music with a pop/rock touch. The group's new disc is Into Light. The leader of Lynval Golding & Contra Coup (9pm) is the former guitarist/vocalist for the Specials of 2 Tone fame who is now based in Seattle. His Contra Coup is largely a group of Austin musicians formed a few years back to tour with the Gladiator's Clinton Fearon. Fellow Austin reggae veterans and regular house band Mau Mau Chaplains (8pm) specialize in the old-school roots sounds reminiscent of Toots, Third World, and Dennis Brown. – Jay Trachtenberg

Atlanta Dungeon Family descendent P. Dukes and Alabama's Jackie Chain join a slew of rappers – and one singer, H-Town siren TroubleSum – from the Texan underground. In true Texas fashion, they're doing it a little bigger. More than 20 Texas rappers will take the stage here, starting with Austin's "Independent Lover" JIM-E-O and Killeen herbaholics Sparkdawg & Team Spark-a-Lot. Afterward, Houston's Future Rich and ATX sextet Above All prove there's strength in numbers, Yung Quis & GT Garza slow it down on Houston candy paint and Lil Tony unleashes blunted Southern drawl with December's Posted, Loaded, Floatin'. His Dallas cohorts show off the city's many hip-hop flavors, with Dorrough bouncing closer to bubblegum rap and Houston's Fat Pimp claiming his own type of turf: "Everybody love me in my neighborhood, and I get a lot of hoes." DJs Mr. Rogers and Stickygreen Productions spin between sets. In the words of a certain local booker, it's really goin' down. – Chase Hoffberger

Hello, ladies ... welcome to Austin. You sound so enchanting, what with all of those X chromosomes. Pull up a chair. Stay awhile and sing. Sure, you've got time for one more. Let your set run long. I bet you like it when your set runs long .... Oh. Sorry. That was inappropriate. Anyway, the Quebecois showcase has delightful women. First let's get the guys out of the way. Substitute cello for piano and Mahavishnu for Radiohead, and you've got sort of a Brad Mehldau analogy for Matt Haimovitz & Uccello. Elephant Stone plays perhaps the most accessible songs amongst the recent deluge of the neo-post-psychedelia. The remainder of the draw features part-time local Emilie Clepper and her airy-voiced innocent folk. Little Scream has a similar breathiness to it, like Chan Marshall with a whimsical lushness. For a break from the ethereal, the Pascale Picard Band checks in with sparse but buoyant pop. Closers the Luyas feature the preteen chirp of former SS Cardiacs' Jessie Stein, notable also for being one of the few people to play a Moodswinger, a 12-string electric zither. – Michael Bertin

Can't afford airfare to Lollapalooza Chile next month? This Chilean showcase by Plutopia presents the next best thing, with two of the festival's marquee bookings. Trade Inverness, modern alt-rock en Español, for Fernando Milagros, a romantic balladeer with an impressionistic ease and a cinematic streak, previously featured on La Blogotheque's Take Away Shows. Lolla-bound Francisca Valenzuela, a sparkling 23-year-old pop songstress, could almost pass as a Spanish version of Feist on her second album, Buen Soldado. Intimate Stranger made such a splash last year at SXSW that the Anglo-Chilean quartet relocated locally and signed to Austin's Fringecore Records for Under, a lustrous, Warped Tour-ready collection of upbeat guitar-rock softened by Croatian singer/bassist Tessie S-Woodgate and subtle synths. Gepe, the project of designer Daniel Riveros, weaves digital folklore and indie pop with a tropical twist, but the real catch here is Chico Trujillo, a mischievous big band that's cited as the main exponent of New Cumbia Chilena. The ninepiece ensemble issued its first stateside release last year, Chico de Oro (Barbes Records), a boiling pot of pan-Latin grooves that's spiced with ska and surf, but swings like Fania Records in the late 1960s. – Austin Powell