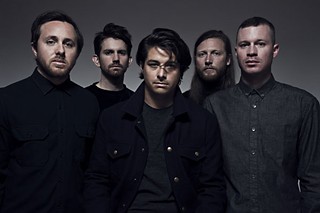 Just over 10 years ago, Delta Spirit emerged from southern California as a freewheeling roots/indie rock band. Their fourth full-length, last year's dark and dusted Into the Wide, found them in Brooklyn. Frontman and part gypsy Matt Vasquez recently moved back to Austin, his childhood home.

"I got married and sick of the weather," he claims from his home in the Hill Country. "When you get married you want to have children. Raising a baby in New York doesn't sound that great to me.

"I love Austin. This place, more than any place on Earth, feels like home. When Delta Spirit toured, I'd get to visit my relatives here twice a year.

"So I've seen the city grow and now it's totally insane."

Vasquez admits location influences his songwriting, but only to a point.

"There's definitely a more sunny attitude on the first record, especially the EP that we did. I've written a ton of melancholy songs over the course of my career, but never have there been so many as I have lately. I think part of it was living in New York City.

"We went through Hurricane Sandy while we were there, and our studio flooded – like six feet deep."

By Vasquez's accounting, one year Delta Spirit played 14 gigs during SXSW. He claims only "a humble eight or nine this time around." That includes Willie Nelson's Heartbreaker Banquet at his place in Luck. Delta Spirit's rolling soundly these days.

"The truth is, we're no longer a bunch of butthead 20-year-olds in a band," chuckles the singer.