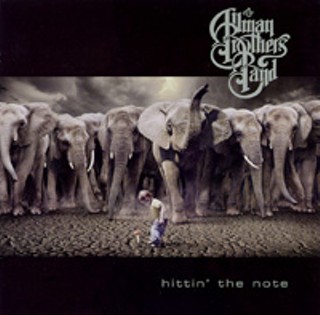 Hittin' the Note (Peach/Sanctuary) The psilocybin mushrooms pictured on the inside of Hittin' the Note say it all about the Allman Brothers Band: unhiply hip, unrelentingly Southern, undeterred by death and misfortune, unerring in a love of blues that's unaffected by 35 years of playing. In their maturity, ABB resembles the big bands of the Forties that might lose a figurehead or namesake and still play in top form. And with Hittin' the Note (named for the group's fan-club publication), that's exactly where the Allman Brothers are. By layering originals that sound classic ("Desdemona") with worked-in covers ("Woman Across the River," "Heart of Stone"), their fabled family solidarity remains intact and vital, a neat trick considering their last studio album came out in 1994. The 12-minute "Instrumental Illness" could've been a way of reaffirming their godfather of the jam bands status, but Oteil Burbridge's jazzy bass, Marc Quiñones' percussive plane, and the jazz/blues changes from double drummers Jaimoe Johannson and Butch Trucks elevate it into pure ABB art. Outside solo efforts by Derek Trucks and Warren Haynes strengthen, not dilute, the band's collective sound, as their feuding guitars propel "High Cost of Low Living" and "Maydelle" with rough grace. That leaves big brother Gregg Allman, whose soulful vocals hold the standard for white boys singing blues and whose keyboard proficiency is without peer ("Firing Line"). You want angst, find a singer-songwriter; Hittin' the Note doesn't take chances or push the envelope, it simply delivers.