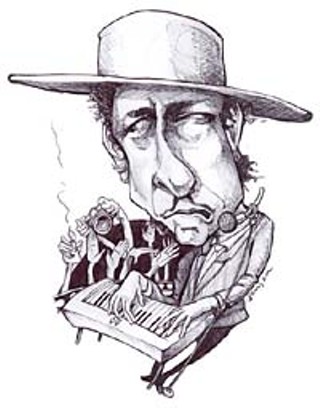 The Backyard, April 19-20 Common knowledge asserts that the least of a dragon's worries is liver cancer. It was with great confidence, then, that while witnessing a bristling, occasionally raging Bob Dylan on Easter weekend, I waved off any online rumors of 2003 being a chemo-ravaged End to the Neverending Tour. Sure, the sixtysomething is fatigued. There are 16 songs a night now instead of 20 as he enters his Duke Ellington Orchestra-in-decline phase: quite literally off to the side, on keys, probably thinking of soundtracks and theatrical adaptations. Irritable. Ornery. Old. Dylan has seen his own decline before, many times over, and you could see him cling to those keys on such songs as "Dignity" like a battered dragon on the edge of the cliff -- defiant, proud. Forever. Like, he's not sick, he's sick! "Well, even if the flesh falls, falls off-a my face, I know someone'll be there to care," he chars out during "Standing in the Doorway," a rolling, masterfully arranged song and one of the few to straddle both performances at the Backyard. Fittingly, it comes from Dylan's most death-haunted album since 1962's Freewheelin', 1997's Time Out of Mind, as did two of the weekend's standouts: Sunday's "Love Sick," and the stomp-and-start Chicago blues "Cold Irons Bound." The latter found Dylan center stage -- smoke and fog swirling around the oak trees behind him, Strat held like a stolen lance -- shouting, "I'm waist-deep, waist-deep in the mist, almost like, almost like I don't exist." But he does exist! Bob Dylan, fire-breathing dragon with excellent phrasing, exists, and he knows it. We knew it, twice, with 26 different songs out of 32 played over two nights. For every scornfully tossed harmonica, for every mangled verse of "Tombstone Blues," for every scornful look at his loyal bassist of 15 years, Tony Garnier, and his precocious drummer of one, George Recile, during 2001's jump-a-billy "Summer Days," there was also the slicing fiddle of Freddie Koella on the anti-hero's anthem, "It Ain't Me Babe," and longtime multi-instrumentalist Larry Campbell's soothing pedal steel on "You Ain't Goin' Nowhere" and Holy Saturday Night's "Saving Grace." And so their boss sang, "The death of life, then comes the resurrection. Wherever I am welcome is where I will be." That, in this case, would be the Backyard, and Bob Dylan showed up. On fire. Breathing.