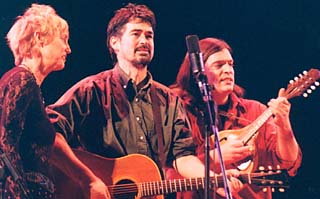 15th Annual North American Folk Alliance Conference & Woody Guthrie 90th Birthday Celebration Feb. 5-8, Nashville, Tenn. Anyone who thinks that SXSW is overwhelming should've been in Nashville last week. With more than 2,000 attendees, the North American Folk Alliance held its best-attended conference/music festival ever. It kicked off Wednesday night with a tribute to Woody Guthrie, the father of modern folk music, though here in Austin it would've been called a hoot night. Instead of the Hole in the Wall, this went down at the mother church of country music, the Ryman Auditorium. Featuring broad readings of Guthrie's work, ranging from the improvisational to the wistful, performers included Guy Clark, Nanci Griffith, and Marty Stuart, as well as Austin's Jimmy LaFave, Slaid Cleaves, Eliza Gilkyson, Peter Rowan, and others. The final sing-along of "This Land Is Your Land," led by Arlo Guthrie with several generations of Guthries onstage, was moving and gratifying without being overly sentimental. The rest of the week was what could only be described as a folk-music overload. It started before noon each day and lasted till way too late. The typed, single-spaced showcase guide was 41 pages long. There was a hillbilly band from Kansas City, the Wilders, performing exuberantly in a hallway; Jim Lauderdale breaking a sweat in a hotel suite brimming past its capacity; and Ray Wylie Hubbard previewing his new album in a room that was too big, at a time that was just past reasonable. Besides the music, there were panels, networking, and schmoozing. But this was different; the Folk Alliance is working at a level that is, to use a cliché, grassroots. Some staffers work out of their living rooms while holding more than one job, but they do it because it's important and fun. In a time when the rest of the music business is beyond jaded and unsure of its direction, this attitude -- the whole weekend, in fact -- was refreshing and, for anyone who loved music, too much fun. (Austin's Cactus Cafe celebrates Woody Guthrie this Saturday, Feb. 15, with Jimmy LaFave, Slaid Cleaves, Eliza Gilkyson, and more.)