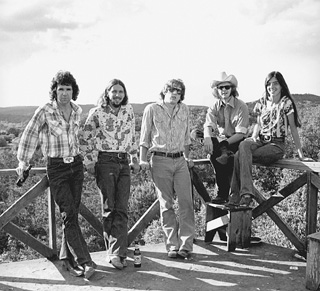 At first, the fire is hidden in the smoke. Twelve bell-bottom bluesy country songs on a new CD, produced for vinyl in 1972 by Atlantic Records legend Jerry Wexler, performed by progressive country pioneers Freda & the Firedogs for a debut that never came out. So what's all the hoo-hah about?

It's a question worth asking.

Austin's fabled music scene is built on a foundation of outlaw country twisted around psychedelic roots. Musical styles and recording techniques have changed vastly over the last 30 years, and Freda and the Firedogs bears the distinct stamp of the past. It's an almost breezy, country-tinged affair, hardly a harbinger of the rowdy times to come.

Then again, it's worth remembering what a hippie haven Austin was back when Marcia Ball, Bobby Earl Smith, John X. Reed, Steve McDaniels, and David Cook packed the Split Rail on Sundays as Freda & the Firedogs. The One Knite was open, but not Soap Creek Saloon ... the Armadillo World Headquarters, but not the Opera House. Tequila was 35 cents a shot, the beer of choice was Lone Star or Shiner (not Bock), and punk was still a prison term. A favored bumper sticker of the times: "Long hair and Longnecks -- Nowhere but Texas."

Marcia Ball is blunt about why it took three decades for the album's release.

"The contract stunk!" laughs Ball. "It was one of those old-fashioned, multirecord deals. If we could have found someone to advise us, we'd have been in better shape."

The band could have used some of Bobby Earl Smith's current expertise then. Smith is an attorney today, but in 1972 he was the band's guitarist and singer-songwriter. Still an active scenester, Smith attributes the band's balking to the times, when anti-establishment interests were suspect. Without legal advice, the band had no feedback other than Wexler's word and good reputation. Ball sent the contract to a Memphis lawyer who didn't even read it.

Wexler's rep was good, especially in Austin: He signed both Doug Sahm and Willie Nelson. Hell, he signed Aretha Franklin and Led Zeppelin! Why shouldn't Freda & the Firedogs take a chance? Smith says a deciding factor was the too-much-too-soon syndrome.

"The band began in March 1972, and by August, we were recording," explains Smith. "Doug Sahm had said, 'Hey man, I know Jerry Wexler, and I can set you up with this deal, man.' And it happened so quickly. It seemed too easy, and we made it hard."

Two years ago, Wexler recalled the Firedogs fiasco to the Chronicle.

"There was paranoia running throughout the country, 'Be real careful, because those sharpies from New York are going to fuck you; they're going to suck your life's blood.' [The band] got to where they never would sign the contract. Never signed the contract ..."

Freda & the Firedogs did sign and eventually return the contract, but by then, the bloom was off the rose. "We'd exhausted his considerable Jewish forbearance and patience," Smith notes ruefully. The tapes were shelved in the Atlantic vaults.

What value might a record unreleased 30 years ago have today? Plenty. Aside from being a mini time capsule opened for cosmic delight, Freda & the Firedogs reveal themselves to be among the godparents of Austin's prodigious roots-music obsession.

Today, Carlyne Majer is president of the National Association of Recording Arts & Sciences Texas Chapter. Back then, she and husband George Majewski ran Soap Creek Saloon. Majer also managed Ball's post-Freda career and signed her to Capitol Records in the late Seventies. She's amazed that "that form of music from an Austin group would be perceived by Jerry Wexler to have tremendous value. But they set a precedent for hip country music."

"In listening to the radio around here, you can hear what was in the air then," posits Ball several W.C. Handy Awards and Grammy nominations later. "You read about Austin music in the Seventies. The band was a big part of that, but there was nothing to hear. Once I suggested finding something to release, Bobby Earl ran with it."

"What a gentleman Wexler is!" Smith effuses. "I called him and introduced myself, saying I was with Freda & the Firedogs. 'Bobby, I know who you are,' he said. He told me the master tapes burned up in a fire in the Atlantic vault years ago. I could hear tape boxes shuffling. He said he couldn't find his own personal copy, but could he call me back. Five minutes later, the phone rang and he said, 'I've got 'em. You want 'em? Let me make a call to Atlantic.' That was the extent of my negotiation."

Jerry Wexler did, however, let Bobby Earl Smith know -- amicably -- just what kind of faith he had in the band. "'You really fucked up by not signing the contract.'"

"I don't think we would have become the Byrds or Asleep at the Wheel," muses Ball. "Don't think we'd still be playing that music. The band ran its course. The album would have been a finished product to represent the band, and I regret we didn't have that then."

"I'm not one for looking backward. My life has been great. I've been married 37 years and have two wonderful boys and wouldn't trade that for anything. If we'd hit that pot of gold, I'd have been on the road, and it would have been a different story.

"But what a wonderful time that was."