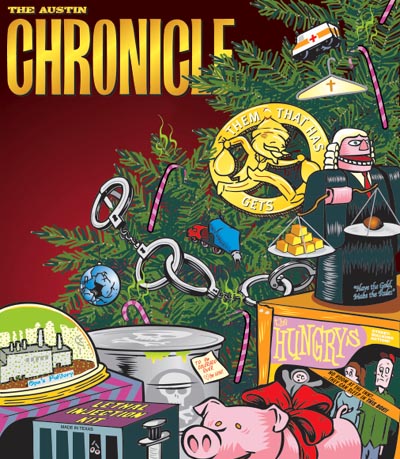 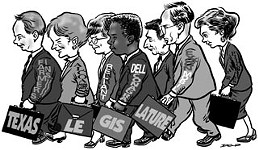 The Capitol circus returns, but the permanent government is always in session.

Bad Bills with a Bullet

City vs. Seton: Coming to a Hospital Near You

Negotiations between City Hall and the Seton Healthcare Network, beginning this week, could determine the future of public health care in Austin.

Summit for the Aquifer

Defending the Arts at AISD

Trash of the Titans Offends Neighbors, City Board

Neighbors rack up more complaints about Northeast landfills -- and the city Environmental Board joins the fray.

Railing at the Rail Yard:

Do You Feel Safe? A Chronicle Questionnaire

Test your patriotism with our attempt at Total Information Awareness.

News Briefs from Austin and elsewhere

Time waits for no one -- especially not the Downtown Austin Alliance or the Austin Music Network -- at the City Hall sausage factory.

Bob Dole scolds us from his taxpayer-funded penthouse; and, "This police rescue is brought to you by: Hooters!"

Bacchus & Me: Adventures in the Wine Cellar

The Japanese Kitchen: 250 Recipes in a Traditional Spirit

The Craft of the Cocktail: Everything You Need to Know to Be a Master Bartender, With 500 Recipes

The Glorious Foods of Greece: Traditional Recipes From the Islands, Cities, and Villages

Virginia B. Wood brings the wine and tamale news, just in time for the holidays!

Second Helpings: The Other America

Noise Ordinance meeting is postponed, as is the ultimate fate of the Austin Music Network. Happily, the Armadillo Christmas Bazaar is back.

A Part of America Therein 1981, Totale's Turns, Perverted by Language

Dial a Song: Twenty Years of They Might Be Giants

The Man Who Cried Fire, Radio Nights, Les is More, A Tale of Two Cities The Lord of the Rings -- The Fellowship of the Ring: Platinum Series Extended Edition

Gorillaz Phase One: Celebrity Take Down

The Curse of Frankenstein & Horror of Dracula

Once and Again: First Season

The Young Ones: Every Stoopid Episode

Giving the gift of joystick jollies

The Lord of the Rings: The Two Towers

The gift of joystick jollies

And May All Your Christmases Include Extravagant Song & Dance Numbers

Fangs for the Memories

IMAX movies and swingin' singles meet up, make out, at i-mixers.

England welcomes Harry Knowles -- and his Underoos -- with open arms.

If the point is to see if Miss Swank can act in a dress, the jury's still out. Otherwise, this historical drama is just shy of fabulous. Former Chronicle "Cover Master" and legendary tattoo artist Michael Malone's aka Rollo Banks' career has always on been in ink; now it's on paper.

The Way We Were

On the eve of his move to New York City, playwright and Austin Script Works Artistic Director John Walch reflects on the development of Austin's theatre scene during his time here.

If you're still looking for the perfect gift for that arts lover on your shopping list, you have until Dec. 18 to get a 2002 Porsche 911 Twin Turbo Carrera for a mere $100, courtesy of Arts Center Stage's raffle to raise funds for the Long Center.

Dave Steakley's version of Smokey Joe's Cafe at the Zachary Scott Theatre Center sets ablaze dozens of familiar hits from the musical catalog of Jerry Leiber and Mike Stoller by shifting the setting to a Playboy Club circa 1962 and rekindling the flames of desire that burn in the team's songs.

While each of the seven bedroom dialogues in Aidan's Bed, Blake Yelavich's tight comic subversion of melodrama, relates to a deadly sin, the play as produced by Naughty Austin, is harmless at worst and titillation at its best.

The Austin Playhouse-McCallum Fine Arts Academy co-production of Dickens' seasonal fable A Christmas Carol may be wafer-thin in substance, but the abundant goodwill of the entire company, from youngest to least-young, gives the show the warm, sweetness of a traditional holiday brew.
columns

This week in Fashion: What kind of advice would Amy Fisher give Lizzie Grubman? And who has the hottest Underoos?

I keep hearing about omega-3 fatty acids. What are they, where do they come from, and what good are they?

You don't think that this whole thing with Iraq could have anything to do with the fact that Iraq sits on 10% of the world's oil reserves? Naw. It's gotta be them weapons of mass destruction.