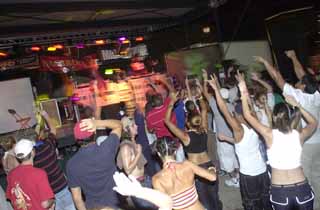 Peaking at the Wilted Daisy Playscape (Photo By John Anderson)

Well, the long-planned Electric Daisy Carnival finally happened last Sunday -- sort of. After the event's cancellation the previous week, which in turn led to a last-minute rave where a young man died, promoter Noah Balch handed over the EDC reins to the folks putting on Summerfest, who added the event as a second day of their own get-together. Not that it mattered to many people. Only a couple hundred folks showed up to the parking lot at Seventh & Trinity in the midsummer Texas heat to do a dance thing that normally takes place at night with light shows and such. Still, Balch is just glad something happened and calls Sunday, "a success, production-wise." It's also his swan song, according to Balch, as his Ark Productions is declaring bankruptcy. "There's no way to keep it in operation if I can't put on a show -- the curtain has finally dropped," he says. He encourages ticket holders for the original EDC to continue holding onto their tix for discounts on upcoming performances by the artists who were supposed to play the big rave. So why did such a simple idea as planning a rave end up as such a debacle, with authorities and Statesman editorials calling for harsh new laws to regulate dance music shows? Ironically, Balch has said from the beginning that EDC was intended to prove that such shows can be done properly, hand in hand with the long arm of the law. "I wanted to work with the city," he sighs. "I wanted cooperation with the city, I wanted sponsorship by the city -- I never wanted to be 'underground.'" Instead, he claims that local authorities have a grudge against him and purposely did everything they could to put the kibosh on the event. Furthermore, he contends that in doing so, they were responsible for the appearance of events like the one at Asylum where a party-goer overdosed on Ecstasy. "When legitimate promoters are prevented from hosting their events," he asserts, "the less reputable promoters spring up." County Judge Sam Biscoe shrugs off the accusations, insisting that the EDC was canceled simply because Balch didn't show evidence of insurance in time. "The certificate of insurance is due a week before the event in every case," he says. "The reason for the week is that we try to validate it or confirm it. And to be honest, what they showed us [late] was not valid because it was not made out to Travis County -- the insured party was the city of Austin." He adds that, given the death of a young girl five years ago at an area carnival, putting on EDC at the Expo Center where there are carnival rides was a "deadly combination that made the insurance all the more important." Balch will have none of it. When he was notified that the county needed to meet with him over some concerns about the event, he claims, "They kept delaying the meeting" until such time as they could discover a loophole that would allow them to cancel the contract. He claims that any concert promoter can get their insurance taken care of in a matter of minutes for a typical show. With Balch, for all intents and purposes out of the picture (he says he'll be helping people with dance events "behind the scenes"), time will tell if Austin's troubled rave scene will ever cuddle up with the authorities and become an above-ground, safe, legal series of shows. For his part, Biscoe declares, "I'm not categorically against [rave promoters] using [the Expo Center], but I do think we need to put our heads together and figure out how we can partner up to conduct a good one." With Balch out of the picture, it's up to the next dance maven in town to hold the judge to his word.

Could this be the end of the Kerrville Folk Festival? With Rod Kennedy handing over the reins to other parties, word is there's chaos among the Kerrverts following a none-too-successful initiation year for the new investors. Some are worrying, in fact, that this weekend's Wine & Music Festival, with Foscoe Jones, Shake Russell, Ruthie Foster, et al. (see www.kerrvillefolkfestival.com), might be the final bash out at the ranch. Says stockholder Stuart Vexler>, "The festival lost money very heavily the first year the new ownership had it, what with heavy rains all three weekends, and we couldn't support the overhead of a year-round fully staffed office. At the very least, we have to go back to the volunteer staffed model." Vexler's hopes are resting on things like the recent Teachers Professional Development Camp that the Fest held recently, in which educators came and took workshops from songwriters. "If Kerrville and other festivals can provide a service to the community in which they operate, then they're viable," Vexler says. There's still some tough hurdles to jump if the Fest is to continue, however. "The land was up for foreclosure," Vexler admits, "but it looks like we'll be able to take care of that. We hope to get a decent turnout to the Wine & Music festival, and that it won't be our last gathering at the ranch." In other festival cancellation news, the seventh annual Austin Bob Marley Festival, originally scheduled for September 7 & 8 has been canceled. According to a press release, the Festival was unable to utilize its reservation at Waterloo Park after the city of Austin Parks Department decided to award the date to a former producer of the event. The former producer did not have a festival in place and was unable to utilize the date.

There's Round Rockin' Ahead

Last year when we put Tim O'Connor on the cover of the Chronicle, he was talking about retiring from the concert promotion business. Well, it seems that some people have funny definitions of retirement. For Backyard, La Zona Rosa, and Austin Music Hall owner O'Connor, it would seem the definition is to open a new major venue on 35 acres in Williamson County. The plan is for an amphitheatre with up to 10,000 seats, though discussions are still under way. "Our team has been together since May," says O'Connor, "and currently we're in the design phase." The land has been owned by the county for some time now, he adds, so there will be no problems concerning the site itself, and with some $3.5 million in the bank dedicated to the project, O'Connor's job is to work with the county on turning the land into a new events center. As far as the future, besides turning half of La Zona Rosa into a free-standing bar, O'Connor says, "Fortunately, we don't go in front of the voters, we deal with the County Commissioners Court, and there's already some support there." He suspects there may be further word about progress on the new amphitheatre as soon as October. Until then, he says, "We've already done a great deal of preliminary work, and we'll continue to do more."

On Friday and Saturday, the Victory Grill presents the first installment of its "Freedom, Peace & Justice for Everybody Everywhere" series with performances by Medusa, Queen of Underground Hip-Hop. A portion of the proceeds from the performances benefit Bikes Not Bombs. The performances will be taped by the Austin Music Network... When Hard Feelings play Gearfest at Emo's this weekend (see Music Listings), they'll have a special guest onstage -- Spike Penetrator. For the unfamiliar, the Penetrators were a band from upstate New York circa 1979, and the band discovered recently that leader Spike now lives in Round Rock. The Feelings are also planning a 4-song EP with Spike to be released by Dropkick Records out of Australia... Wan Santo Condo just signed with Enjoy Records. If you haven't heard of Enjoy, they're the Jack Johnson/Joseph Arthur imprint of Universal Records... Passed away this week is Thomas Woodrow "Woody-- Wilson, the 89-year-old father of Eddie Wilson, who helped his son build the Armadillo World Headquarters... Cyndi Lauper is looking for new fans, I hear. Or at least some less stupid ones. The Unusual One didn't perform with Cher at the Frank Erwin Center last week as planned (see "Stages"), due to an injury suffered the previous night. Rumor has it that the injury, reportedly a sprained or broken ankle, was caused when an over-enthusiastic fan yanked her off the stage... If you've had enough of all this Elvis nonsense, look no further than www.buddyhollycenter.org/htm/symposium2002.html for info on the big Buddy Holly Symposium taking place in Lubbock this week. High Noon, Rosie Flores, Cave Catt Sammy, J.P. Richardson (the Big Bopper's son), and numerous others will perform at the Holly Center on Saturday and Sunday. Previous to that, there will be a spate of panels and such, including one on songwriting moderated by Marshall Crenshaw, with panelists including Texas songwriters Ray Wylie Hubbard, Cory Morrow, Pat Green, and more, plus another in tribute to Waylon Jennings, chaired by John Morthland. Featured panelists on that one include Buddy Jennings, Lenny Kaye, Billy Joe Shaver, and Hazel Smith...