The last installment of "Dancing About Architecture." 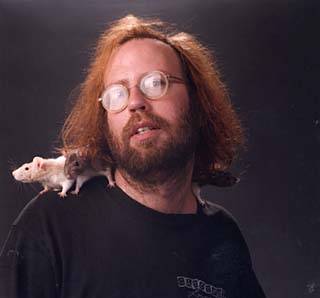 Attention Courtney Love: You can come back to Austin now; the coast is clear.

Yes, you read that right. This is indeed the final "Dancing About Architecture" column. After more than 13 years of reporting the goings-on in the Austin music scene for this paper, I'm stepping aside in order for a fresh pair of ears and eyes to dive into the sea of new, young acts currently plying their trade on the stages of our fair city.

It's been fun, from hanging out in bars and digging local bands too numerous to name here to chatting up celebrities ranging from Tenacious D to Leif Garrett. There was also my own modest participation in local musical events, including the pissing off of the former Mrs. Kurt Cobain, which the National Enquirer ended up covering. Not that it makes the writing of this final column any easier, especially since I'm doing so on Christmas without access to any reference materials. Some of you looking for music news might find it even harder to read. If you're among those, I suggest you consider the column from two issues ago (austinchronicle.com/issues/dispatch/2002-12-20/music_ dancing.html) my final one and this page to be more of a long historical footnote.

Things have certainly changed a great deal -- both at the Chronicle and in Austin -- since the first installment of "Dancing About Architecture." When the column made its debut in September 1989, there were no less than four music columns in the then-biweekly paper. They didn't all run in every issue, but in the aftermath of Michael "Corky" Corcoran's still-recent departure, there were different regular features covering jazz, roots rock, and other specific beats. Occasionally, it was difficult to find enough music news that hadn't already been snapped up by the others.

Several attempts had already been made to replace Corky's popular "Don't You Start Me Talking" column, each one worse than the previous. At the time, I had been penning an obnoxious monthly column called "Under the Ground and Over Your Head" for Gavin Lance's short-lived rag Oasis, and I also wrote occasional pieces for the Chronicle, including a prank-laden Corky-fill-in column under the name Michael Dorcoran. After one writer, who shall remain nameless, began a column that didn't even put bands' names in bold print (nothing less than a crime in this business), I bitched to Louis Black about it and was told that the last way to get a job is to complain about the person who's currently doing it. A few weeks later I was hired for the position, with the condition that I also make myself useful to the fledgling publication by taking the Chronicle to the printer in Marble Falls each week.

When "Dancing About Architecture" began, Austin was still in the final months of its Eighties glory days. The music scene was still a distinct and vibrant thing, rents were still reasonable, bands still had the opportunity to establish an audience by playing at parties, and everyone from Rolling Stone to MTV was hailing the town as the next big place for hot bands to emerge from. Austin was much more compact back then, in that "small town" way, and when you wrote a music column, you knew that the bulk of the people reading it knew for the most part who and what you were talking about. That said, it wouldn't be long before the key bands of the day, like the Reivers, Glass Eye, and the True Believers, soon gave up the ghost, disillusioned over being considered brilliant but not marketable enough for the big labels' continued interest.

Still, that didn't stop Austin musicians from becoming tainted by the possibility of big-time success. As the other niche columns dropped by the wayside, "Dancing" quickly had to be refocused in order to cover bands' national and international successes, as well as the evermore difficult situations being faced by musicians and music-related businesses in Austin. Though I tried to keep boosting new, fresh bands, their comparatively smaller triumphs increasingly got pushed aside by the bigger news of the day (even during that period when it seemed that the vast majority of said news was being made by Fastball).

As the dot-com boom/bomb progressed, things got even worse; reporting the city's crimes against music and the long list of venerable clubs closing down took up the majority of the ink, leaving even less room for bands of any stripe to get in their names. I didn't like it, but the fact was that this column had become the place for news, first and foremost. Hopefully, over the years I've helped people know where to go and what to do in order to help keep some clubs alive. I trust I've also helped local musicians and music scenesters with music festivals here and abroad, SIMS contact info, benefit shows, and getting ahead in whatever other ways in which I could help.

By the time those post-boom years rolled around, the column no longer required that I make the rounds of the clubs every night, though I still tried to keep in touch with most venues on a regular basis. Unfortunately, that became more and more difficult as I got hit harder and harder with the symptoms of a rare hereditary neurological ailment that has made my life a living hell.

Those of you who wondered why I didn't recognize you at times or thought that I was ignoring you or maybe just thought I was drunk when I wasn't, those moments were most likely due to my illness. There are a couple of years in the mid-Nineties that I literally don't remember.

During those years, I don't know how I managed to keep turning in a column each week. As simple insomnia progressed to nocturnal Parkinson's-like symptoms, I somehow survived month after month with less than a half-hour of sleep per night. What brain cells I had still operating were concentrating on simple life support, barely leaving me any ability to think clearly or remember names and faces.

Then came a couple years of desperate self-medication with various narcotics, as doctor after doctor shrugged my plight. Finally, this year I was directed to a neurologist familiar with my condition (an extremely aggressive, mutated form of a syndrome called RLS), and thanks to regular injections of a nonaddictive morphine substitute, I'm at last living a reasonably normal life.

That being said, I know there's no way I can go back to the out-all-night-every-night way of life that the powers that be want to reinject into the Chronicle's music coverage. I am now in my late 30s after all, but that alone wouldn't be enough to stop me if I were a well man.

After all, Austin is still teeming with club owners, club employees, and music fans that manage that feat week after week, year after year. If anything other than my health were at fault, the loss this year of my old base of operations, the Hole in the Wall, put the final nail in that coffin.

The Hole was always my anchor on the way from home to Sixth Street and back, even after increasing rents finally forced me out of living in the West Campus area a few years ago. Now, I'm not one to be blinded by nostalgia; as much as I miss the Cannibal Club, the Cavity, Club Foot, and dozens of others, I don't find Emo's, Room 710, or Beerland any less cool.

It's tougher when it comes to missing favorite departed bands -- even when a new favorite comes along, there's still a unique hole that remains unfilled -- but I still look forward to the next act that will excite me and make me want to see them again and hear their CDs.

But now, my former room- and deskmate, Christopher Gray, is returning to Austin from an extended sabbatical, faced with the duty of giving this page back to the bands, as it were. I wish him the best of luck, as this city will only continue to get bigger and its music community more fragmented.

And now that I won't have a weekly deadline and the need to fill a page with depressing news about how another great musician has died, another club has been demolished, or another law has been voted in that kicks Austin music in the ass once again, maybe I'll also be able to start writing reviews of bands again and perhaps even type up a feature or two on the most deserving ones.

That's after I take this opportunity to do nothing but eat, sleep, and watch the Game Show Network for a couple of months, of course. 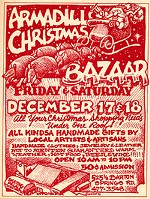 Dancing About Architecture
Noise Ordinance meeting is postponed, as is the ultimate fate of the Austin Music Network. Happily, the Armadillo Christmas Bazaar is back.