Putting the Wheels back in motion to salute soap creek 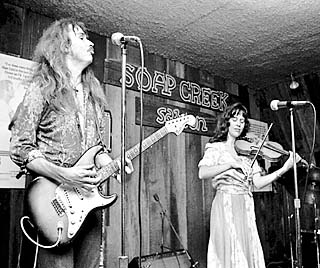 The drive up the last 50 yards of dirt road to the Soap Creek Saloon was usually the most precarious, not including the drunken drives home. The last hairpin into the parking lot/rock field was always jammed with folks trying to find the closest space possible to the Creek's front door. Regulars knew they could fall into their car if it was close enough. They knew, too, they could stay put. Better to sleep it off there than in a ditch on the side of Bee Caves Road.

The drive to the Greezy Wheels swan song gig was no different, except there would be no others. After nearly eight years and numerous personnel changes, we were entering the barnlike building for the last time as a band. With virtually all the Wheels from both of the two distinct groups in attendance, it was a mighty fine night at Soap Creek. Like so many nights at Soap Creek Saloon.

I still get misty over that night. Greezy Wheels had come and gone. No more trading joints for entry at the front door, no more standing around the fireplace between sets on cold nights, no more fat-arming George and Carlyne Majewski into reducing the bar tab. No more partying all night with the audience for whom we'd just played. During the last set of the last show, we looked down from the stage with the lowest ceiling anywhere (except the Split Rail) to see we weren't the only ones crying. We all bawled like the babies we were in 1978.

The greezy thing was over. Or so we thought.

Why, after all these years, have the Greezy Wheels started spinning again? Why is there a new album, Millenium Greezy? Simple: Austin is in danger of losing its greezy. Austin has become too cool. The music scene has become a music industry. A decent living has become a multimillion-dollar economy. True, big bucks do support a lot of musicians -- we're all for that -- but bucks ain't mojo. They don't make up for lost greezy. They don't replace the Soap Creek Saloon. We're back because somebody needs to let Austin know this.

Nobody's saying the good old days were perfect, but when Greezy Wheels began, the Austin scene was still a child, innocent and unassuming. Actually, it wasn't a scene at all. It was an extended family. The full house at our first show at the Armadillo (as the third, unbilled opener for the Flying Burrito Brothers), meant that 80% of the entire hip subculture was in attendance. That was 1971. Was Bob Schneider even alive in 1971?

Greezy Wheels didn't come together looking for a "sound" or "groove." We more or less coagulated, cell by cell, as we bled our lives out in front of live audiences. We could do this because our fans knew us personally, often intimately. We only came to pass because Big Rikke, the Guacamole Queen, insisted I needed more than the nine songs I'd played in my two previous solo sets at the One Knite, opening for Storm, with Jimmie Vaughan and Doyle Bramhall. Pat Pankratz and Mike Pugh, who joined me a week before a third Storm show, brought in, like, six more songs -- which made us a band.

I'd only done those solo sets in the first place because my career in pot smuggling had been snuffed by Harvey Gann, captain of the vice squad. He'd busted me a couple months earlier on my last run to New York City to fulfill the orders of my customers at the Fillmore East. As a musician, I had no illusions of grandeur. I had a 10-week-old baby to feed. I wasn't seeing stars before my eyes. I was seeing baby formula.

Believe it or not, there just weren't that many gigs in Austin in the early Seventies. We did find a club willing to let us play and rehearse, the Checkered Flag, which later turned into Castle Creek. It became our first home base. Tony Laier and Sweet Mary played their first gigs with us there. We'd found Mary playing with Ken Threadgill at Bevo's, which sat at the corner of 24th and Rio Grande. We didn't even know we needed a fiddler, but when we saw Sweet Mary, we wanted one. Me especially. I've been in love with Sweet Mary ever since.

Tony Laier finagled his way into the band. He showed up at the Flag one night with a washboard and a drum kit and was a member of the group the following day. We all knew, including Tony, he wasn't really a drummer, but it didn't matter. We liked Tony because he liked us. He became a Greezy Wheel because he was family. Hey, that was the greezy way.

One week after Mary joined the band, Eddie Wilson came to a rehearsal and hired us on the spot for the Burrito Brothers gig. He'd come because someone in the extended family had told him we were good people. We never submitted a promo pack, didn't have band photos, had yet to develop any real following, and we were nobody's press darlings. Try to get a decent gig in Austin today with those credentials.

The crowd at that show watched us hit the stage in the same cutoffs and T-shirts they were wearing, probably after smoking the same pot backstage, and invited us into the family. They gave us encores, swooned over pretty Pat, fell apart when Mary played, and told us, "Y'all come back." Then we watched the Burritos with them, ate burritos with some of them.

Once those folks welcomed us into the fold, they, their cousins, South Austin friends, and cedar-choppers everywhere supported Greezy Wheels. Many followed us to our next home base, the Hungry Horse, once at the corner of 19th and San Jacinto. Two pool tables, a bar, and enough beer for about 100 Texans on any given night. A wonderful home to anyone looking to get greezy. Or shitfaced.

My sister Lissa, already my favorite singer on the planet, joined us on that stage, having come down from upstate New York with about 20 others from the area. Austin had been deemed the new Mecca for whatever hippie culture had survived the free-fall in San Francisco's Haight Ashbury. Since I was the only local musician facing a pot rap at that time (others would soon follow), I became a cultural hero of sorts.

That and Johnnie Cochran might have kept me out of prison. Just as the first incarnation of Soap Creek was christened the Rolling Hills Club by founder Alex Napier, I was forced to turn myself in for a seven-year sentence. A series of benefits at the Armadillo failed to keep me out of prison whites. There was no tie-dye behind the Walls. Innocence lost.

I did 11 fucking months. Who knew how much that would affect the next 26 years of my life. While I was gone, everything that mattered changed. It sped up. Me too. I hit the free world burning rubber. Still, I had to find another gear to catch up. I didn't know it yet, and wouldn't for another four years, but the Austin I've described was already fast disappearing.

The Armadillo had reached world-class status. Castle Creek was bringing in top folkies. El Rancho, the pot dealers' choice for Mexican food, had moved across First Street. If the Split Rail wasn't gone, it was on its way. Bands like Krackerjack had established new territories like the New Orleans Club. And Greezy had two new members, Tony Airoldi and Madrile Wilson.

Carlyne and George had turned the Rolling Hills Club (one keg of beer per night and no sound system) into the Soap Creek Saloon, the best roadhouse in Texas. It became our last, and most cherished, home base. Oh, by the way, Austin had grown by nearly 50,000 people.

It took me months to catch up. When I did, I jammed into warp drive. It may have been the biggest mistake of my life. Greezy Wheels got huge, sell-out-the-Armadillo huge. My ego soon followed. Until that last Soap Creek-er, it became about making it instead of being greezy.

We almost did make it, too. We signed one of the first major-label contracts ever offered in Austin. We recorded two albums for London, both of which were out of control from the git-go. We bought a bus, I started wearing silky shirts, people asked us for autographs, and our friends became fans.

The music, the family, the greezy -- all eroded away. The musicians went first. Both Tonys, Madrile, Pat, and Mike were replaced by Chris Layton, Victor Egly, and Chip Dill. The general musicianship soared, and yes, loyal fans stayed with us, but the family/ greezy thing was gone.

We played a lot of great shows, toured the East a couple more times, appeared in a movie, and continued on at Soap Creek. We were facile, tight, musically adventurous as ever, but the magic that spawned us had pulled a Siegfried & Roy. It was the vanishing tiger.

We cried at Soap Creek's last roundup. Most cried over our demise. I cried over the fact I'd lost my greezy, our greezy. We played out the full three sets, and closed the club with George and Billy Bob. The next day, we were smoke.

Twenty-three years later, we still seek our inner greezy, and for the first time in a generation, we've been given the opportunity to show it off. The new album, Millennium Greezy, comes not from our ambition, but from the heart. Our greezy family mojo heart. And, in the oddest of all coincidences, eight months after we chose our October release date, Kerry Awn called us and asked us to be a part of the Soap Creek Reunion this Sunday at La Zona Rosa.

The whole Soap Creek family will be there. We thought it could never happen again. Go figure. Maybe the greezy isn't dead after all.