Virginia Glore asked the APD for a rape test -- instead they're prosecuting her for DWI.

A timeline of the events in the Glore case

Negotiations between the South Texas (Nuclear) Project and its union workers threaten to meltdown.

It Grows on You

As the economy gets tight, newspapers around the state feel the pain.

An eco-conscious Elgin resident answers his mayor's demand to "show me the money."

A reader sheds additional light on an altercation between Critical Mass cyclists and a road-enraged driver.

The Chronicle gives cheers and jeers to breaking news coverage of the war.

Someone stole important artifacts from the Texas Archeology Research Laboratory. So why didn't UT tell anyone?

Political commentary on the prospects of single-member districts

Apparently, the candidates for statewide office have better things to do than answer tough questions from the Texas NAACP.

Food editor Virginia B. Wood on the first pressing of olive oil in Texas

Greezy Wheels, back from the dead (the Seventies).

Those were the days …

Make Up Your Minds!

We're Pro-Ramones and We Vote!

The Sword of God

FM: The Rise and Fall of Rock Radio

In the wake of the terrorist attacks, the Austin Film Festival pulls local filmmaker Tom LeGros' feature from the lineup.

In this biographical film documentary, legendary film director Stanley Kubrick is exposed by his brother-in-law and frequent collaborator Jan Harlan for the artist and family man he was.

Enjoying illicit pleasures like crack rock via the Internet

On the road with Rock Opera, how to get your tix for Waking Life, and Robert Benton talks about writing.

Entertainment television struggles to address the events of 9 / 11.

Christmas in the Clouds Benefit Screening 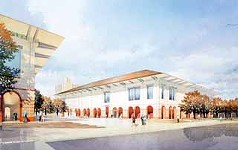 The preliminary design for UT's new Blanton Museum of Art facility has been unveiled, and as expected, the white-shoe Boston firm of Kallmann McKinnell & Wood has come up with a building that hews to the dicta of UT's Campus Master Plan, even when it doesn't make much sense.

Ailing actor Douglas Taylor is on the mend, actors Babs George and Lowell Bartholomee get the recognition they deserve (from the Payne Awards), and choreographer Deborah Hay wants you to spend the weekend with her.

Having Our Say: The Delany Sisters' First 100 Years

In Pro Arts Collective's admirable production of Having Our Say, the intimacy of the performing space and warmth of the show's two actresses make the experiences of the centenarian Delany sisters -- and the history they have lived -- come alive in a remarkably personal way.

Little Shop of Horrors: A Good Time Out of Joint

The war on Afghanistan isn't just wrong, it's stupid, and it's not going to work, either.

A right, a left, another right: our letters column takes it on the chin.

Coach reflects on the UT-Oklahoma game.

J. David Bamberger has taken a slice of the Hill Country and restored it to pristine beauty.

The phlogiston what sets your brain a'burnin'.

I have been having a lot of stomach problems, with alternating diarrhea and constipation, but all the tests my doctor did fail to show any problems. He said I probably have "irritable bowel syndrome." What helps that?