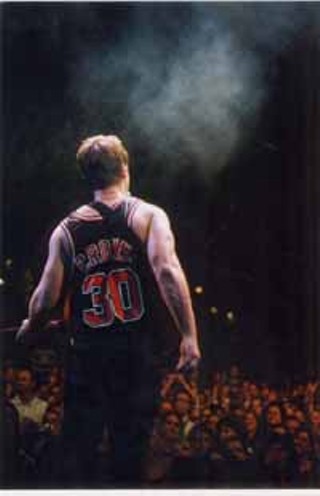 Russell Crowe is in peak form these days. Not only did the New Zealand-born actor snare critical acclaim (and a Best Actor nomination) for 1999's searing Michael Mann feature The Insider, but this summer's hyperkinetic sword 'n' sandal smash Gladiator has proven that the laconically intense actor can carry an entire studio blockbuster on his own. As he's shown in Proof, Romper Stomper, and L.A. Confidential, there's much more to Crowe than meets the testosterone. Of course, this is much ado about nada to Crowe, who casually refers to his fast-track acting career as his "day job" and shuns the limelight like a seasoned vet. Crowe's driving passion, and the one that's more or less responsible for keeping his feet on the ground throughout his meteoric rise, is his music, and more specifically his work with the band Thirty Odd Foot of Grunts -- a name taken from the film Virtuosity.

TOFOG, as they've been known to fans for the better part of a decade, combine a folky, vaguely pub-rock sensibility with Crowe's innate gift for spinning hardscrabble yarns about bad luck and busted hearts; if they weren't from Down Under, the only other place they could hail from would likely be Austin. The trio of Stubb's shows they're performing while here in town laying tracks for a new CD should ease a few minds restlessly recalling the last time Keanu Reeves' Dogstar played here.

Crowe spoke with the Chronicle from London, where he'd just wrapped the lengthy Proof of Life shoot, about the band, its music, and the subversive pros and cons of Napster. This from a bloke who asked me to make sure and list his bandmates [see below] and also to insert his name "down at the back somewhere, and misspell it if you can."

So without further ado: Russle Croe.

Austin Chronicle: How long has TOFOG been together?

Russell Crowe: I met the guitarist, Dean Cochran, in 1984, and we did our first record together in 1985 with a band called Roman Antics, ironically enough. That band was together for about two and a half, three years, when Dean and I started writing songs together. That's the seed of Thirty Odd Foot of Grunts.

Around '92, I was feeling the pressure, the weight of the films I was doing in Australia. I really was wanting to get back into what I used to do, with the music, so we started doing it again regularly. Bassist Garth Adam has played with us since '87, and drummer Dave Kelly has been with us for about five years. For the last two and a half years, we've been playing as a sixpiece, with Stew Kerwin, the trumpet player, and David Wilkins, who was the support act for the last tour and would sit in with some backing vocals, adding the missing thing.

AC: Where do you play when you're on your home turf? I hesitate to call this a bar band, but I can really see TOFOG in that sort of smoky, late-night venue ...

RC: Yeah, we don't do concert halls, we do pubs. In Australia they're called beer barns, and some of them are pretty big. They take a couple thousand people. Pretty much like Stubb's, I'd imagine.

AC: What kind of audience do you draw? I imagine there's plenty of folks who come to the show just to see Russell Crowe the actor.

RC: We still have people that come and see us who were buying Roman Antics records in New Zealand in the Eighties. It's funny, though, because it's developed and grown so much. If me and Dean weren't still fertile as a songwriting partnership, then we would have stopped it years ago, you know? But every time we get together, we just walk past each other in the studio and another song pops out.

As long as it's healthy, it's a completely credible medium for me to be creative in as far as I'm concerned. And you know as well as I do, mate, that there's nothing credible at this point in pop-culture history for doing both, right? I don't do it for anything other than the fact that I love doing it. I've been writing songs since I was a little kid, and it's really just a part of me. And that goes for all the sort of performance/art things that I do. They're all lifelong commitments.

AC: Give me some idea of your musical background. Were you one of those kids who grew up in a musical household with all sorts of instruments and prodding? 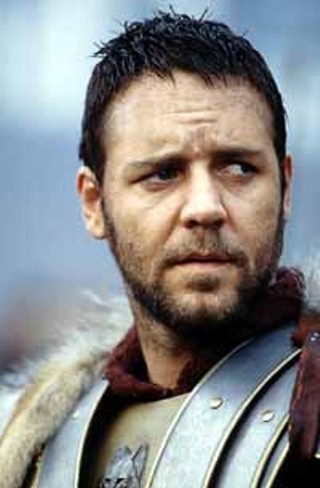 RC: Funnily enough, my parents had a really limited music collection even though they were great music lovers. They used to go out quite a bit and socialize at dine-and-dance restaurants, which were a big thing when I was a little kid. My mom had an Elvis Presley bootleg called Elvis Sings Goldens Hits that she got off some American sailor who was in town, and the title was the only thing in English -- the rest was in Cantonese or whatever.

When you're a little kid, you get obsessed about certain albums so you don't really get to know music in general -- you specifically get to know a bunch of songs. Then you move on to the next discovery, applying the same sort of thing. You play these albums to death and then get more and more of them. It was a musical household from that point of view, but not from the fact that they played instruments or anything. They would both sing a little bit, but only in the shower variety.

AC: How did you decide on Austin as a place to record your new album?

RC: The whole seed of this idea started the last time I met you [during the L.A. Confidential press tour in 1998]. I was just walking up and down that main road there --

RC: -- right. Taking in all the sounds and thinking this is the ideal place to record. You can just walk out of the studio, walk along, get a bit of inspiration, get some Shiner Bock -- cracker! -- and then wander back into the studio and have another go, right? It's small enough in terms of being a containable town -- transport's easy, all that sort of stuff -- but it's really about the way people focus on live music.

I went and saw the Asylum Street Spankers and a few other things while I was there, and it was really a very inspirational place. I'd rather the band were in a city like that than lost in a sort of jungle in New York or something. And plus, our songs, they need a bit of space, you know? They need an audience that likes to listen to more than their own voice. Which is what you tend to find in Los Angeles and New York, in my opinion.

AC: You have a pretty unique idea of distribution for the band, in that you rely almost exclusively on the Web site to get the music out there, right?

RC: I have a cottage-industry attitude toward it. A number of years ago, the band decided that we wouldn't bother with contracts anymore, we'd just have the Web site [www.gruntland.com] and do our own thing. We get about 12,000-15,000 hits a week on the site, and the cool thing about it is that people just discover it for themselves. They don't get it forced down their throat by advertising budgets set up to get the high-rotation, FM radio-friendly sort of thing. When people find it, they take it to heart, and they really commit to it. A lot of the fans of the music are really annoyed that I'm even a movie actor.

AC: So what's your take on the big controversy surrounding Napster?

RC: I totally understand it from the bands' point of view, because the audience that's downloading that music are the core music fans, the ones that normally would be paying for the band's music. On the other hand, I can still see it from Napster's point of view, too. I used to do the same thing off the radio, with a cassette, you know?

AC: Has your increasing celebrity impacted the band in a positive or negative way? Obviously the band's draw has been increasing exponentially.

RC: Yeah, but see, we've been selling out shows -- live shows -- for the past four or five years. I'm not sure, because of the places we play and the style of venue we play, that there's much more headroom for an increased audience that we want to be comfortable with, you know? We just turned down a stadium tour with all these big bands because that's just not our thing.

I think the type of music we play really has to have a sort of personal venue, and I think about 2,000 people is where we top off. That many people can still be a very personal experience. We just take it as it comes along, and sure, the Web site did get a pretty massive increase in attention just recently, but I think the cool thing about it is that people don't come back unless they discover something cool that they like.

AC: One last question for you: How does Russell Crowe describe TOFOG's music?

RC: Well, instead of going through some elaborate kind of description, I just tell people it's folk music. You know? In most people's heads, that makes them think of some kind of dusty, acoustic setting, which obviously isn't really what the band is about. But I don't think there's any more accurate description of what we do. It's folk music, with true stories, and every piece of music has a narrative. Some of them are a little oblique and maybe you can't necessarily follow the story A to Zed, but that's not a bad thing either. It just makes you think.