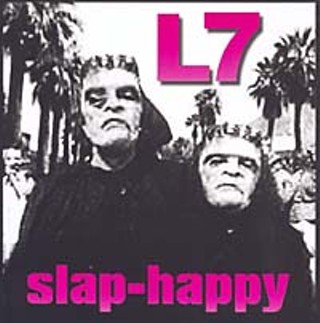 The Nineties are over, and with them goes another disposable: modern rock. Foo Fighters, Smashing Pumpkins, Hole. And now L7 -- at least if Slap-Happy is any indication. Following a hard-to-find one-off for Frank Kozik's Man's Ruin label, the live hootenanny Omaha to Osaka, L7's post-major label return to the studio is just what its title implies, Slap-Happy. Beaten 'til it's dumb. Not nearly as wretched as the band's self-titled debut for Epitaph in 1988, nor as depressing as '94's Hungry for Stink, the band's latest suffers mostly because it's not their last album for Slash, '97's hopefully named/sadly overlooked The Beauty Process: Triple Platinum. For starters, Slap-Happy doesn't have a second side, the album defying you not to rip it out of your CD player at the halfway point with the interminably annoying "Stick to the Plan," after which songs seven through 12 stagger about stupidly like a lobotomized boxer. Punk rock casualties. Starting with "Stick to the Plan," Slap-Happy is one long, nasal, wise-ass line after wise-ass line from Donita Sparks, who besides running off poor, fresh-faced bassist Gail Greenwood -- the group is back down to a trio: Sparks, Suzi Gardner, and Dee Plakas -- is quickly becoming self-parody. Even the rompy, stompy little opener, "Crackpot Baby," smacks of familiar L7 formula, while the second track, "On My Rockin' Machine," could've been a catalog classic with some work. Instead, they just Slap-Happied it together.