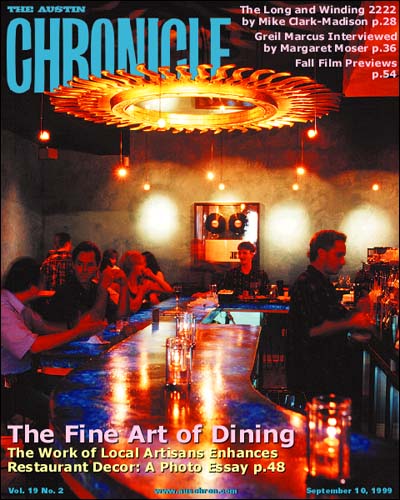 When we see a dog running free, why are we frightened? Longtime Austinite Paula James meditates on the effect that fear of the natural world has had on us. 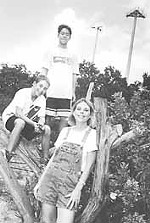 The growing number of cellular towers in Austin has prompted changes to the ordinance regulating the towers.

Austin Energy budget comes under fire as the utility prepares for competition; the Texas Our Texas Heritage Program has big plans for state parkland and conservation; and a new state audit highlights problems with the Texas Workforce Commission's oversight of local welfare and workforce boards.

A Paucity of Parkland

East Austin residents have a say in neighborhood planning; local advocates ask for more money in city budget to fund their special interest; Bill Spelman issues some strong words against the Statesman's criticism of council on the LCRA water deal.

The Fine Art of Dining

Tracking recent restaurant openings and closings; plus upcoming events in Austin that cater to chileheads. Scavengers of the Vast Wasteland

Whether they're riffing on punk, metal, funk, jazz, film scores, or even klezmer music, Brown Whörnet attacks each passage with a vociferous intensity that seldom fails to keep an audience at attention.

Austin Jazz & Arts Festival doesn't need saving after all; the strange sounds coming from Austin's backyards; barbecue to replace Austin Blues; Honky attacked by lesbians in Chicago!; and more news from the Live Music Capital of the World.

Pictures From Life's Other Side

Live in Paris and Toronto
screens

The fall 1999 film season looks to be busier and noiser than ever. Local screenwriter Aubrey Horton offers a comedy screenwriting workshop; aGLIFF screenplay competition winners announced (and more screenplay madness); Kevin Costner to be in attendance at the premiere of For the Love of the Game, the Alamo's Cannibal Film Series; and more news from the Austin film scene.

O St. Clare, help us in this time of Emmy nominations.

A Dog of Flanders Greil Marcus and the Mad Parade

In his book Lipstick Traces: A Secret History of the 20th Century, Greil Marcus explained punk to the world and created a bible for that music's true believers. As Austin theatre company Rude Mechanicals opens its stage adaptation of Marcus' book, the author talks about the Stones, the Sex Pistols, and the "mad parade" of history.

The Austin Museum of Art has a new chief curator.

In this week's section of Austin Chronicle Arts reviews, Robert Faires gets hooked on Rob Nash's Junior Blues and Robi Polgar goes under the Big Top for Suzan-Lori Parks' Venus.

Venus: A Vessel for Others Under the Big Top

The LCRA water deal with the city of Austin is suspicious.

Solid Gold 40 is shocked and dismayed; non-fans of Carole Keeton Rylander add their two cents; a tear for Tony's Vineyard; and more letters to the editor.

Pre-season NFL predictions to assist you in your betting pools.

Rattlesnake bites will get you in The Zone; plus tidbits on Sacajawea, George Washington, ants, and more.

Georgetown's Palace Theatre Guild's You Can't Do That, Dan Moody! is staged in the actual courtroom in which the play's events first took place.