The beef with brisket 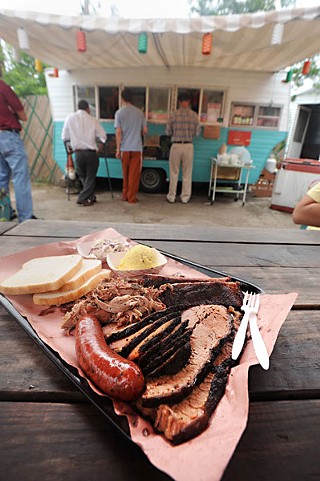 I made a genuine effort to come up with an entire column of double entendres based on the concept of Super Bowl snacks and deflated balls, but the below news somehow seemed more pertinent.

Brisket crisis! One key to the popularity of Central Texas' beef-based barbecue joints has always been affordability. Frugal German and Czech butchers started the tradition of taking tough, cheaper cuts of beef like brisket and shoulder clod and cooking them low and slow for several hours until, voilà, they invented the working man's revered beef nirvana. Brisket affordability is unfortunately now a thing of the past, due to the nationwide popularity of Texas beef-based barbecue coupled with the persistent drought in cattle country. Remember food trend stories from the past couple of years featuring Texas pit masters as media darlings, while hard news reporters offered up sad stories of cattle ranchers selling off the herds they could no longer feed and water? The stories of last year's depleted cattle herds led to this year's alarming news about the rising cost of brisket and its impact on one of our favorite pastimes and culinary tourist attractions. Pit masters from Lexington to Austin to Llano are feeling the pinch, paying wholesale brisket prices that are just a shade under what the rest of us pay retail in butcher shops, and they're having to adjust menu prices. Third-generation barbecue man Wayne Mueller of Louie Mueller Barbecue in Taylor explains it like this: "The problem is deeper than skyrocketing prices, it's also supply availability, double jeopardy. Two years ago I was paying $1.88 per pound for brisket, last year it was $3.09, and today I'm paying $4.19. Since our yield is only 50% on cooked brisket and the price of the black pepper [in our rub] has doubled to $6.75 per pound, my net food cost for brisket is just over $9 per pound. If I held to the top end of a rough industry standard of a 33% food cost margin, I should be charging $27 per pound for brisket. But if I did that, my patrons would revolt, so I'm forced to live with a food-cost margin of 45 percent right now, selling brisket for $20 per pound. It's devastating."

Mueller went on to add that agricultural economists from Texas A&M have told him the best-case scenario is that we can expect beef prices to remain inflated for another 36 months, unless another unanticipated situation has a negative impact on beef availability in that time frame. "Beef-centric barbecue could be headed for the same dining class as steak houses where consumer prices are concerned. What worries me is that the consumer will ultimately bear the brunt of these prices, and we could see the loss of some beef-centric barbecue houses closing as a result," a dismayed Mueller told us. While the potential loss of iconic Central Texas barbecue houses is cause for alarm for many, I'm betting there's a percentage of the population greeting this news with one thought – "How soon will I be able to just walk in off the street and eat at Franklin Barbecue?"