Who's That Guy on the TV Set? That's Not the Don I Know! 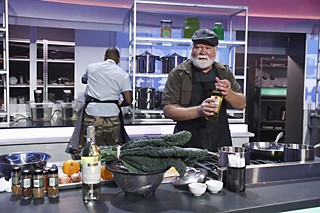 Don Pullum on ABC's The Taste

When I first saw Don Pullum on ABC's The Taste, he was crying. I had never seen him cry before. The Don that I know is a joyful, funny, witty man. Because of our mutual connection to the world of wine, we've known each other for 10 years, and I have seldom seen him without a smile on his face and a word-twisting joke on his mind. Then, a couple of years ago, in the space of just a few months, he lost his vineyard to a fire, had his beloved dog pass away, and then Diana Escobedo, his high school sweetheart and wife and partner for 41 years, died from complications of amyotrophic lateral sclerosis. Suddenly the smiles were less frequent.

Diana had been the central light of his life. She had left college to marry Don while he was away in Massachusetts attending Harvard, taking acting classes, pursuing a degree in English and American literature, and hoping to someday set up a community theatre in his hometown of Corpus Christi. While in Cambridge, they discovered the area's rich assortment of ethnic restaurants. "All of the food was better in Cambridge than anyplace in Corpus," he explains. "Even the food at our school cafeteria was better. Dining around Cambridge and Boston was a culinary, cultural revelation for me and even then I started buying cookbooks. I was amazed there was more to life than chicken-fried steaks." I was shocked to find out he could cook! "That's funny, isn't it," he says. "Hardly anyone in the Texas wine industry knows I cook. I used to do it a lot for friends in other places, but I've been working so hard to build the grape-growing and wine-making industry around Mason that I just didn't do that much cooking for friends."

After he graduated, Diana returned to college and got a bachelor's, then a master's degree in organizational development. Don worked in banks and ended up with a venture capital firm. Diana worked in the compensation department at Continental Airlines and suddenly they had the ability to fly anywhere they wanted virtually for free; they chose culinary and viticultural hot spots where they could stay at nice hotels. They were living in Washington, D.C., when she landed a high-level corporate job at EDS. Don figured he was done with corporate America and he began looking for a place to grow grapes. After studying soils, rainfall patterns, and temperature grids, he chose Mason, Texas. Don planted an acre of Grenache while Diana worked long days in Plano.

When someone has an overwhelming disease like ALS, it tends to become a label for that person. That's all the viewers of The Taste got to know about Don's wife, Diana. I mention to Don that it was a shame they didn't get a chance to know her better. After all, she was a brilliant person and an early feminist who rose to high levels in the corporate world. Plus, as Don remembers with a laugh, she also had a wicked sense of humor. He shares an anecdote that's not exactly appropriate for the newspaper but then, for just a moment, I see the Don they kept showing on The Taste, the one who's still devastated over losing his lifelong partner. He sniffs, stops for a moment, and ends the thought with a simple declaration. "She was amazing."

How Did He Get on the Show?

First, it's important to know that Don is contractually bound to be very circumspect about giving away any details about The Taste. However, we know lots of people would like to get on a network show, but don't know how. I ask how Don pulled it off. "Years ago, I had gone on a cattle call for a show called MasterChef. I wasn't selected, but the producer told me he would keep my information and maybe get back with me some day. They went on to be part of The Taste, so they contacted me and asked me to do an interview. Once they thought I would make good TV, they chose me and 34 other people to come out to L.A. and try out. I cooked a deep-fried oyster with a Thai gastrique and a roasted jalapeño hot sauce. They loved the food, and I was chosen by multiple judges. It was amazing to be wanted. After all I had gone through, the show came along at just the right time."

So What's It Like Being on a Big, Network Reality TV Show?

"Really hard work," is how Don sums it up. "They'd get us up at 4, 4:30am. You'd have to get dressed for taping, but also take two changes of clothes along with you. We'd go to makeup, and then have a great breakfast from a taquito food truck. We were on mic and being filmed up to 16 hours a day. They wanted to make sure they would have any drama that came up. Lunch was candy bars, chips, and white bread sandwiches. They would herd us from waiting room to the kitchen areas and back. All day long, they would pull us out to do interviews. They kept the mentors and cooks separate except for that one hour of the actual cooking. We'd work every day for a few days, then get a day off. That went on for a few weeks."

It sounds as though the producers were a pretty controlling lot. "I wouldn't put it that way," Don says. "They just wanted to make sure everyone was at the top of their game at the drop of a hat. So we had evening curfews and we could only go out for a couple of hours at a time. Basically, they had production assistants making sure they got all the best parts. They even monitored us in the bathrooms!" When I ask Don about the personalities of the show's stars, he sits forward in his chair and smiles. "Honestly, we didn't interact with the other judges, but we were around them a lot, so I did form some opinions. Marcus [Samuelsson] was my mentor and he was really focused and didn't joke around at all, but still really nice. Ludo [Lefebvre] is actually a very nice man who is playing the tough guy. [Anthony] Bourdain, I really liked. He was exactly like what you see on camera. Nigella. Hmm." The smile grows. "She is a gracious, elegant, beautiful woman. She has a very strong personality, and she's also very astute about business. I asked her out on a date." What! "She said maybe. Didn't say no. I'm still hoping to hear from her."

Would You Do It Again?

"They treated my character with dignity, and I really appreciated that." Don is an intelligent man who uses his words thoughtfully. So I asked, why is he using the term 'character'? "You know, they cut more than 85 percent of what they taped. They could edit these things any way they want. With me, I made some comments that I think were really funny, but they ultimately wanted to focus on my age and losing Diana. That's fine. I made some good dishes, and I was the only male home cook to make it to the final 16. [Don was voted off the show on the Jan. 16 episode.] I was proud of what I accomplished. I still think my paella deserved to win. In one way it did. I was in a grocery store in Corpus Christi a couple weeks ago and was looking at some fish. This couple came up behind me and told me they thought my paella should have won. It was nice to be recognized and to hear that people in the public care about me. But the bottom line is yes, I would do it again in a heartbeat."

In fact, Don would love to do a food and wine show himself, and he's looking into filming one on a regular basis for YouTube. "We will visit restaurants that are locavore and pour great drinks and have a half-hour-long chat." He also has to get back to work as a winemaker, which, I can attest, is something he does well. Plus, he's still waiting to hear from Nigella. "Maybe when she finally gets back to me, we could go out on a double date." Then that big grin comes back. That's the Don Pullum I know.

The Taste airs Thursdays on ABC.