What If Your Restaurant Doesn't Need Redemption?

Getting Satay ready for its close-up

Judging by the fact that there are now several reality TV programs featuring hapless restaurateurs, hoteliers, and bar owners in impossible, even nightmarish situations that require redemption and rescue, the concept of the show must have a certain appeal. The newest of the programs is the Cooking Channel's Restaurant Redemp­tion, hosted by Taiwanese-born BBC celebrity chef Ching-He Huang. Ching's specialty is "redeeming" Asian-themed restaurants. An advance production team from Lion Television of New York does the research and diagnosis and then Ching swoops in with cooks and a designer to refresh the menus and upgrade the eatery's look.

The first segments of Restaurant Redemp­tion began airing in the late fall of 2013 and the Lion Television advance team contacted Foo Swasdee, owner and chef of Austin's Satay, right before Labor Day, to see if she would be interested in being the subject of an episode. Because she had not sought them out and didn't consider her restaurant to be in trouble, Swasdee's first question during the Skype interview with a casting producer was why the company had chosen to approach her specifically. "They told me that in their research, they could see that Satay was one of the oldest Thai restaurants in Austin, and they wondered if I might be interested in upgrading the menu or refreshing the decor," Swasdee recalls. She says she repeatedly made it clear that she wasn't interested in making any serious changes at Satay, and their rejoinder would always be, "But could you use more customers?" Swasdee says in retrospect that she admitted being interested in advice about how to attract a new generation of customers to augment her existing clientele, but she was curious what the catch was. The producers assured her their services would be free and that they could help her with marketing to millennials. The preliminary deal was struck.

Fairly soon, the Lion Television team arrived at Satay with production managers, line producers, and consulting chef Bradford Thompson. Swasdee says things almost broke down during contract negotiations because she was adamant about a number of things she wasn't willing to change. "I like the decor the way it is and I wouldn't let them move the Buddha in the garden; the Buddha is placed that way for a reason," she says. She was also uncomfortable with the financial loss likely to be incurred by being closed for business for several days, so she sent out an email blast to her clientele about the Cooking Channel filming at the restaurant, hoping for some immediate marketing exposure. The Lion folks explained that since they are a production company who creates product for television networks, she couldn't really promote Satay's appearance on the show until the segment had been completed and sold. Marketing would have to come afterward. 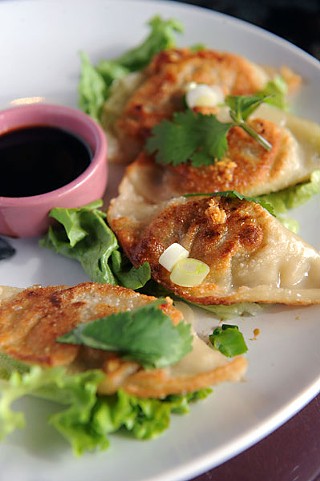 The production was at cross purposes from the start. The seasoned restaurateur and qualified food scientist did not feel that after 26 years of success, her menu or decor needed change; however, in order for the production company to follow their format, they had to find (or create) a problem that young host Ching-He Huang could solve. Most of these shows thrive on drama between family members or employers and their staff, but at Satay, the drama turned out to be between the restaurant owner and the host. According to Swasdee, there were several confrontations where she made it clear she didn't need to be taught how to cook Thai food, which resulted in tears (Ching's). "We didn't agree on anything at all from the beginning. I like her personally, I think she has good intentions, but I don't need help with my food," Swasdee says. "I got really mad, and I almost quit the show!" It was necessary for production manager Matthew Horovitz to take Swasdee aside for explanations about how things needed to be done in order to get a reality TV show to work. Ching ultimately chose to "improve" five dishes and developed a much shorter bistro menu for Satay. The dining room got new pale lavender wall coverings plus tables, chairs, and dishes from IKEA. Then it was time for the big reveal.

A group of invited guests – regular customers, including myself – stood outside Satay for a couple of hours on a blustery fall evening, signing releases to appear on television (in case we happened to be caught in the filming) and discussing concerns about the possible loss of longtime favorite menu items. ("If they did away with the yam pancakes, it will break my heart!") We were finally welcomed into the "new Satay" by the smiling team of Foo and Ching. The new wall covering gave the dining room a lovely, soothing glow and the new bamboo-look chairs were attractive, if not particularly sturdy. Rather than offering guests the new bistro menu from which to order, the kitchen sent out the five dishes that had been "updated" by Ching. The production company circled the room with cameras, interviewing guests about what they thought of the new Satay and that appeared to be end of it until the episode made it into the Restaurant Redemption air schedule.

Several weeks after the original shoot, Swasdee heard from the Lion Television team again. They had decided since the Satay experience turned out to be so dramatic, they would come back to Austin to shoot more footage and expand the Satay episode to an hour. Swasdee says they also assured her they would bring that long-promised expertise in marketing to millennials. Swasdee decided to keep the new wall covering in the dining room but she's not sure how much longer the tables, chairs, and dishes will last; not being designed for repeated commercial use, they've already begun falling apart and chipping. The shorter bistro menu is available, if customers would like to order from it, but all the favorites are still there.

"It turned out to be a great experience," says Swasdee. "Now I understand reality shows are not reality. I think I want to have my own show!" In fact, she's started working on a series of YouTube videos about healthy Thai cooking.

The Satay episode debuted this week on the Cook­ing Channel and will air again at 11am Satur­day, Feb. 1. Dr. Swasdee is hosting a watch party that Saturday, Feb. 1, from 2-3pm in the Baby Elephant Ban­quet Room at the restaurant (3202 W. Anderson #205). RSVP online. 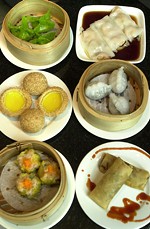 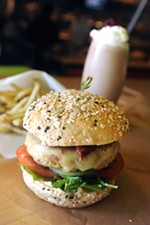 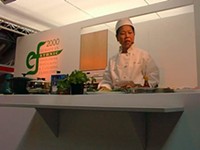