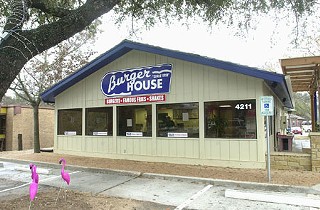 Anyone who has lived in Dallas – especially anywhere near the Park Cities – will be on their knees in ecstasy over the news that Burger House has come to Austin. The landmark has been on the Hillcrest side of Snider Plaza since 1951. Then, a short, jolly Greek named Jack Koustoubardis picked a tiny piece of real estate behind a gas station to start a burger joint. Of prime consideration: He could walk from his house on Amherst. Back then, a working man could afford to live in the before-it-was-snooty Park Cities. How do you make a place thrive for more than 50 years? You start with something unique. Koustoubardis' invention was an herbed salt with lots of garlic and pepper mixed in. He would shake the stuff liberally on his ultracrispy fries and on the burgers. The burgers were cooked on a 3-foot-by-5-foot slab of steel with six burners underneath providing the heat. Koustoubardis would sit there, squeezing each burger to get a little of the fat out so they would cook a little faster, using the side of his spatula to scrape the fat off the griddle. Then, he'd take his Mrs. Baird's sesame-seed hamburger buns and slide them across a contraption to put a little butter on before dropping them on the griddle. The combo of the leftover hamburger fat, the secret salt, and the butter made a crispy texture on the bread. He'd turn each piece over and give the crust a short cook.

On the right side of the griddle was a two-slot fryer, which Koustoubardis kept rolling most of the day with french fries, fried pies, and corny dogs. When the fries came out, they were immediately doused with the secret salt. Longtime fans get religious about the experience.

Longtime fans will also remember Koustoubardis' famous ability to recollect a good customer. No matter how many years I would be away from Burger House, when I'd return, he'd take one look at me and say, "Double Double, mayo, ketchup, onions, and fries." How'd he do that?

It's no surprise that a long line of burger lovers would wait for one of his eight bar stools. Eventually, he set up four picnic tables outside, so he could serve more people. He also started doing a thriving takeout business. The cooking area was only 4 feet by 10 feet, so getting all those orders out required a deft ballet by the staff. He started with just one person but eventually built up to four, which was crowded even for a little guy. For decades, Koustoubardis made every burger, a smile on his face as he worked a punishing schedule on his feet, and everything went great until his wife died. It was like the life got sucked out of him.

Koustoubardis sold the place. He stayed on for years, teaching the new owners all his tricks and secrets. They honored the traditions and kept everything going as if there had never been a change in ownership. The only thing missing if you visit the original location today is Koustoubardis' smiling face.

So, when I heard from a friend in Dallas that there was a sign on the wall with the promise of "Opening Soon in Austin," I was both ecstatic and scared. Could they imitate that funky place, the fun feel, and the great food?

We went to find out on a recent afternoon, and the first thing I noticed was the customers. Koustoubardis' prices always allowed for the financial resources of students, policemen, mail carriers, grocery stockers, and all the other folks who worked in stores in Snider Plaza. The Austin version had two tables of police, three tables with mail carriers, and most everyone else looked like college students. Score one for the new place.

The menu is identical. A Double Double (i.e., double meat and double cheese) is the burger for aficionados and one of the food world's great bargains at $3.70. Koustoubardis would get a kick out of the fact that the french fries are now called Jack's Famous Fries ($1.10). That same crispy, thin fry is a piece of perfection. I asked for a little extra salt, and the guy behind the counter shouted to the cook, "A little extra love on the fries." The milkshakes ($2.60) are the same as ever. Whole milk, real ice cream, and your favorite flavoring, as long as it's chocolate, vanilla, strawberry, or cherry. You can order them thick, thin, or in between.

In fact, there were only three differences between the Austin version and the original. The first two are good for us: Ours is larger, so more people can sit inside. Plus, it offers drive-through service, something impossible for Jack's little landlocked location. The one tiny downside was that the bun didn't feel or taste as though they had flipped it over on the griddle for that last little bit of flavor. Otherwise, Burger House fans should rejoice. We can have it all here.