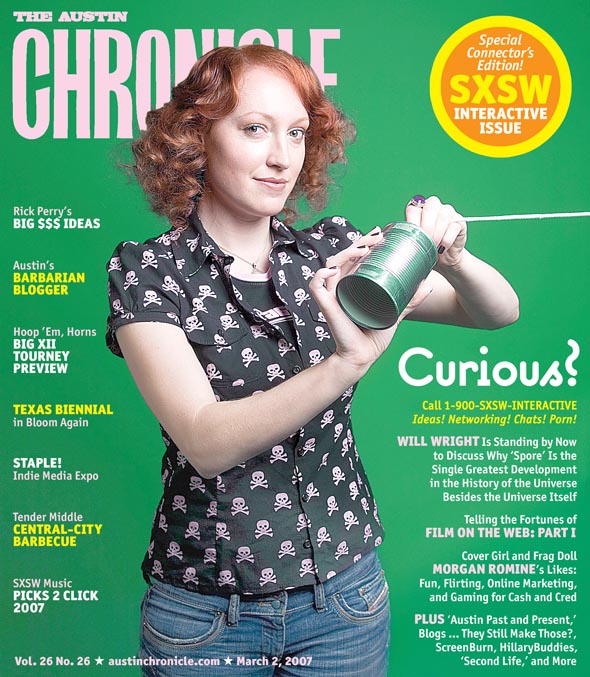 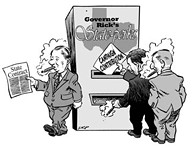 The governor reaches for a legacy – is anybody listening?

County commissioners approve settlement of 2005 lawsuit by former sheriff's office lieutenants against Sheriff James Wilson and county, but why did plaintiffs settle for nothing?

Mark Wilkerson: "My Conscience Is Clear"

Patriots for Peace: Doggett on Congress and the War

May the Circle Be Unbroken

TXU agrees to buy-out, announces it will abandon plans for eight of its proposed coal-fired plants

Stories from under the pink granite dome

For the heady moment, everything he do b-be funky 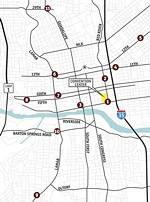 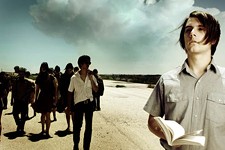 Birthing the Band – of Heathens

The Ugly Beats' Bandstand pledge: It's got a good beat, and you can dance to it

Roky Erickson gets his life back (literally), UT's Harry Ransom Center and the White Ghost Shivers remember the 18th Amendment, and Shaft heading for SXSW? Shut yo' mouth.

The Game of Life

An early look at Will Wright's Spore

From Cells to Celestials

The gaming arm of SXSW Interactive gets pumped

Shooting her way into the public eye

Herding pixels for fun and profit

Off the screen and on the streets

The Future of Film on the Web

Part I: The means

Where the Wild Things Blog

Getting A Money Shot

And I Approved This Instant Message

What will page views, YouTube clips, and MySpace friends add up to for Web-savvy Democratic hopefuls?

The groundbreaking Austin Past and Present archive projects means free museums, movies, music, and more all over town

You mean open source hasn't saved the world yet?

Fix the Lines on My Screen!

A fitting epitaph for the always controversial Van Gogh

Like a steady 12-bar blues progression, Black Snake Moan lays down a groove and works the chords over and over 'til they're all spent.

The Lives of Others

This recent Oscar winner for Best Foreign Film is the story of the small redemption of one man, who happens to be a hated East German Stasi officer.

A 60-year-old man and an 18-year-old girl hook up in this Bollywood Lolita story.

Joel Schumacher and Jim Carrey combine their dubious talents to create an even more dubious movie in which a man becomes obsessed with the number 23.

The gang from the Comedy Central show attend a national police convention in Miami Beach during spring break.

The director of Fight Club and Se7en switches gears here from psychological thrillers to something that more closely resembles a police procedural.
arts & culture

'Gyre': A swirling vortex of plastic ... and creativity

Ariel Dance Theatre revisits Gyre, its investigation of things we don't want to look at, and pulls into its spinning mass bunches of new artistic collaborators

UT's historic Hogg Auditorium is in line for a makeover, and UT alums David and Ann Honeycutt have made a $2 million gift to support the hall's restoration

Visitors to Austin City Hall voted on the 101 works of art displayed in the 2006 People's Gallery exhibition, and their top choice was Benge Elliott's sculpture, Three Sheep

Adrienne Kennedy's Funnyhouse of a Negro is a bold, daring play, and Austin Community College and ProArts Collective have given it the bold, daring staging it deserves

As written by Brian Friel and performed by Babs George and Don Toner, Afterplay is a waltz of the walking wounded danced with stately grace to a beautifully elegiac tune

In the same way that Aztlan Dance Company has revolutionized Latin dance, they take the circus and run with it in their new production, El Gran Circo: The Aztlan Circus
columns

Festival films, the Austin Music Awards, and the truth about South by Southwest 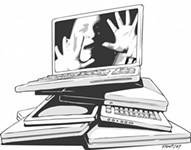 Like everybody else, I’ve come to take the computer’s marvels for granted. I’ve even come to take for granted that, roughly every two years, I’ve got to shell out for a new model.

Stephen's annual Oscar roundup of who DHOH (did her own hair), and look out, Neiman Marcus is coming!

The Choke Canyon State Park is a haven for fishermen, birders, and campers alike

Family and Medical Leave Act – what rights does the employer have? 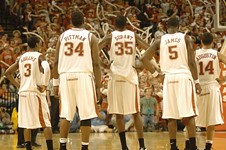 Out of Town, to a Conference

A guide to the Big XII NCAA men’s basketball tourney

There's Nothing Going On Here the Weekend of March 9