Until quite recently, unless your name was Ansel Adams, the concept of life outdoors was about as far from artsy or trendy as you could get. The great outdoors are authentic, true, real – romantic, sure, but in a private kind of romance way, like binge watching an entire series on Netflix with a loved one all weekend long or secretly flipping through attractive Facebook photos of yourself after one too many glasses of wine.

There never used to be a need (or for that matter, a method) to instantly showcase a sunset, record the way a pair of recently pedicured feet look against a pool or shoreline, or publicly detail each piece of sleek camping gear recently procured at the sleek camping gear boutique. Of course there have always been those people – the three-slide carousel "Would you like to see slides of our vacation?" people. But for the most part, being outdoors was enough.

However, in 2015, demure camping trips are becoming somewhat hard to find – much like the buffalo embroidered on a twentysomething's rare, deadstock pearl snap as he poses for an Instagram in front of Prada Marfa. 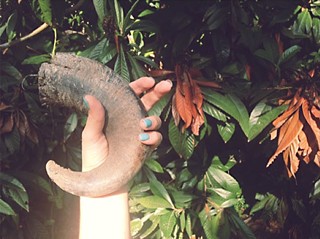 And, of course, even in "we're too cool to be cool" Austin, this glossing-up of outdoor activities trend has taken hold. That's an understatement. You know the feed: pure Americana hipster, with photos of dreamy sunsets, perfectly distressed cowboy boots, and American flags, and plenty of desert camping snaps as evidence. (Full disclosure: For a clearer example, I can just direct you to my Instagram.)

I'll fully admit that I've been on more than one road trip that's been delayed so that someone can nicely arrange breakfast in the bed of a pickup or pull over to nab a photo of some longhorns. It's precious camping, turning an outdoor adventure into an art project. Gone are the days of being one with nature, alone in the wilderness: Even if you can't get a signal, you take those photos because you know those photos of that Big Bend hike with your other shaggy, yet somehow still perfectly coiffed friends partying like it's 1899 are going to get mucho likes later.

One Saturday morning last fall, I sat down to trout for breakfast. Specifically, I sat around a campfire eating trout with baked zucchini at 8am, watching the sun hit the waters of Pace Bend. This unconventional morning meal was not originally on the menu. You think I enjoy the smell of fish at 7am? My camping partner and I were too distracted to cook the night before, but wanted to get some nice shots for our respective social media pages. Yep, that fishy breakfast was all for "the shot" – the idyllic snap of a great camping trip, a snippet of a delicious – if oddly timed – meal for two ... plus 200 Instagram followers.

I don't think I'm supposed to confess that. In fact, I may have just broken some sort of hipster glamping code. After all, no one wants to admit they took the time to arrange that beautiful spread of camping supplies. (Even though those camping supplies most certainly did not just tumble out of the hand-tooled artisan knapsack in a perfectly spaced fashion, nicely arranged by size, shape, and color.) But if you take social media's word for it, that seems to be the current state of outdoor adventure, at least for folks like myself who consider an iPhone to be essential gear.

No one understands the marriage of social media and the outdoors better than Jeremy Pawlowski, an Austinite who runs the blog America Y'all (www.americayall.com). Brimming with gorgeous shots of Hill Country road trips, lush greenbelt hikes, and snaps of his beautiful girlfriend standing in fields of bluebonnets, Pawlowski clearly has a deep appreciation for the outdoors and its aesthetic. He also sports over 14,000 Instagram followers, and has built a successful brand from his blog. (Confession: I totally own an America Y'all T-shirt, which boasts an awesome hipster cowboy lasso graphic.) While Pawlowski says he is fully aware of the irony that surrounds his brand and others like it, he sees no irony in bringing the outdoors to people's screens – no matter how many takes it takes.

"A lot of times I'll be camping, and I will be pissed off that I can't get a photograph of something," Pawlowski said. In the end, he says, it's about the journey, even if part of it is observed behind a lens.

"I grew up in the outdoors of New Hampshire. It's kind of weird how [nature] is stylized now," Pawlowski said. "But to me, as long as people are outside, I don't care what they're doing. Whatever gets people to parks is fine by me."

And therein lies the raison d'être for my own weekly hikes and ungodly film developing budget: I have a pretty Instagram. In fact, I love my pretty Instagram! I'll be honest: My pretty Instagram brings me a nice dose of self-satisfaction, and I take pride in what I post. It may seem trite to make an effort to condense nature into your friends' phone screens, but if I can share even a sliver of the thrill I get from a beautiful hike with them, I'm happy (almost as happy as when I crack four figures in "Likes"). A typical gear list for a lovely trip looks a bit like this. (And let it be noted that my usual camping gear ticks off most of these boxes.)

• An arsenal of Lomography film

• But also, a fully charged iPhone for plenty of digital shots

• Aesthetically pleasing Poler tent. And sleeping bag. And anything else that might look good with that sleek Poler logo on it.

• An American flag to display in those film shots, preferably in a windswept open field First Plates Extra Helpings: The Incredible Edible
Eggs are all they're cracked up to be and then some