A renowned poet attempts to end her life

Maya Dardel (Lena Olin) is about to die. She has chosen to die, in fact. Her living corpse has rotted away long enough, and the vultures are circling. But, she invited them in, and she will choose the most capable one to pick her bones clean - or in more succinct terms, she is searching for an inheritor. 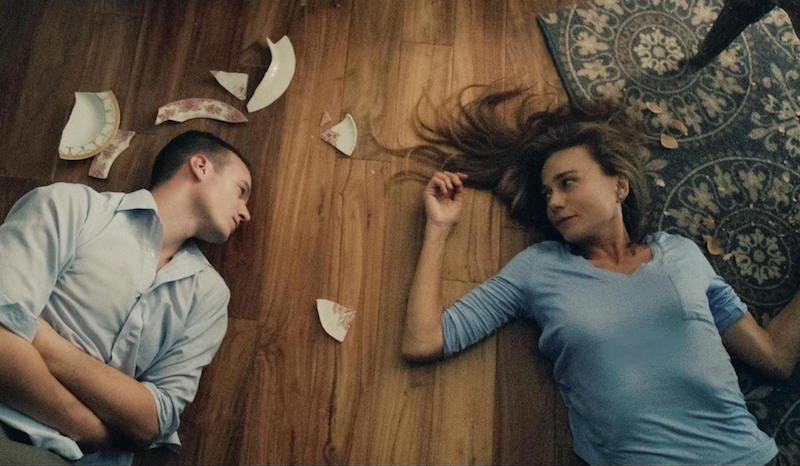 Maya is a poet who has met with success in life, publishing several highly regarded books and acquiring a plot of land in the California mountains just south of Silicon Valley. She has attained a certain age and has decided her life is over - she will kill herself. But she has no children or family to act as executor of her estate, which includes the land and unpublished manuscripts, so she puts out a call for young male writers to apply for the position.

This morbid premise was concocted by a literary pair (Zachary Cotler, a poet; and Magdalena Zyzak, a novelist) and it shows with its intellectual inquiry. The film’s imagery is rather grotesque at times - the buzzing of flies is a recurring sound, as is the noise of cunnilingus. Nearly every minute of the movie takes place on Maya’s property, mostly inside her home, as she cautiously morphs it into a mausoleum. There is a lot of glass (fragility) and roses appear in various states of decay, mostly dried and brittle, like old skin. In one scene she crinkles a pile of dead petals (again, sound) during a conversation about (what else?) language.

In the very first interview, Maya sizes up the candidate in an exacting way, maintaining both composure and eye contact, the way a man would do it. She knows what she wants and she’s very direct with people: to the woman on NPR during an interview (“Please don’t interrupt me.”), to another candidate (“This is not the process,” or in other words “Look, buddy, here’s how this is gonna go …”). She is a woman who has reached a ripe age and feels her best years are behind her; her only concern is what will happen to her work when she is gone. She has decided her body is no longer of use; she has no desire to “squirt out” (her words) a couple more mediocre books. Frankly, she’s worth more dead.

Suicide is a touchy subject, the act is rather taboo, and very few states have legalized assisted suicide. People don’t like death; they tend to cling on to things. Do Maya’s friends want her to die? No. Did I, as a viewer, want her to take her own life? Not really. But that’s beside the point, and yet that is exactly the point: Her body, her choice.