SXSW Interactive: Princess Reema and Women in the Saudi Workforce

Progress and continued struggle for women in Saudi Arabia

In the West, women’s champions fight for equal pay; in Saudi Arabia, they’re advocating for continued opportunities to work outside the home at all. Princess Reema Bint Bandar Al-Saud gave Saturday's Interactive keynote, interviewed by Robert Safian, editor-in-chief of Fast Company, which named her 2014’s Most Creative Person of the Year. 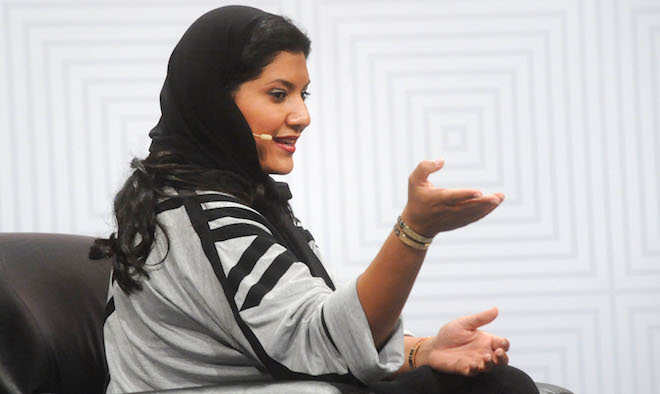 Working as chief executive of luxury retail corporation Alfa International, Princess Reema’s focus became respectful co-integration and an increase of women in the Saudi workforce. Though she says the government is now “1000% on board” with women working, cultural traditions are still prohibitive to shifting paradigms. To reduce obstacles, her company provides transportation and childcare for employees and a separate academy that teaches women fundamental skills essential to makeup artists and homemakers alike, she explained to applause.

On her female employees’ decision to be veiled or not, she said, “The value of what they’re doing is so phenomenal that if you could get over their appearance and finally, maybe try to judge a woman based on her capability rather than her appearance, I think we all, as a community – a global community – would go much farther.”

Adding to her “circle of hope,” Princess Reema aims for a well-rounded approach to empowerment. A high rate of late stage breast cancer diagnoses is, in part, because “talking about some body parts is taboo," preventing early detection. “We want to give them maximum exposure to health knowledge so that they can have self-knowledge and self-care as a mindset,” she explained. A short film debuted during the keynote, coinciding with the website launch of their upcoming Guinness record-breaking awareness campaign, 10KSA.

When asked about conservative push-back: "Am I ignorant enough to think that there won’t be people that are opposed to this? I am not. In every community, I think, you’ve got [those people]. But if you stand still, you give them the power to push you down. If you keep walking, they have to follow you. And I’d rather keep walking.”