Building a Monster: How Gabriel Luna Became the New Terminator

Austin actor on creating "the Ted Bundy of Terminators"

There aren't many legacy movie monsters that went movie to movie, actor to actor. Boris Karloff may be the most famous Frankenstein's monster, but he wasn't the only actor under the green skull extension. Now Gabriel Luna has to fill the role of the Terminator - a part defined by Arnold Schwarzenegger.

In Terminator: Dark Fate, which opened this week, Luna play the Rev-9, a Terminator from a new future, one created when Sarah Connor (Linda Hamilton) and a repogrammed T-800 (Schwarzenegger) destroyed the liquid metal T-1000 (Robert Patrick) in Terminator 2: Judgment Day A star of True Detective season 2, Austin native Gabriel Luna replaces Arnold's slow, methodical walk with a sprint. Fortunately, he's kept his cardio from playing a footballing spy in Matador for Robert Rordiguez's El Rey network, but still packed on 17 pounds of muscle to play the Rev-9, the latest incarnation of the time-traveling killer robot.

Austin Chronicle: As an actor stepping into this franchise, you're trying to keep two big plates spinning. You have to honor the tradition of the T-800 and the T-1000, but you also have to build something unique.

Gabriel Luna: There were many different spinning plates going on. I had very little information early in the process - I didn't even get a script until the day before we flew out to Madrid - but I knew that it had an endoskeleton, like the T-800. It's composed of this matte black carbon alloy which is supposed to be faster and lighter and more flexible, and the skeleton itself has many more point of articulation, so while it's rising and recovering and getting off the ground, it has this weird, almost alien movement to it, it can be unsettling.

And while [the T-800] had living flesh, I had a liquid metal exoskeleton that's more similar to the T-1000. That has the human mimicry technology, and it's very malleable, and it can move. But what's great is that these two elements can combine, and the fact that it can split, and I can operate as these two separate Terminator units that are interlinked and moving in unison - I call it a one-man pack - it was just this next level of sophistication in the machine.

Because of the similarities between it and the T-800 and the T-1000, I did heavy analysis of the first two films. I wanted to honor what had scared the pants off me as a nine-year-old. Arnold is really a creature of habit, and he says, "If it ain't broke, don't fix it." It's something he likes to say, it's something I say all the time, and it's something I truly believe, so I wanted to maintain Arnold's deliberate walk, the way he turns his neck. I wanted to grow my body to be physically imposing - of course, I can't be Mr. Olympia, but I can get strong as I possibly can. I went from 172 to 189, so I was getting bigger, but I wanted to maintain my agility because Robert had this very iconic run, the way he had a sharpness of movement, and I wanted to maintain my agility. Coming from an athletic background, I already had the frame and the kinesthetic memory and the kinesthetic intelligence in my body to move in this way. I've studied western boxing and martial arts, and I've been in a lot of very physical roles, so I certainly had those tools within me.

I think that's what sets me aside. I get to flash a smile. I get to lull people into a false sense of security. That's the Rev-9.

AC: As a one-man pack, you're playing two characters. Did you approach the exoskeleton and the endoskeleton differently?

GL: The movement of the exo, and the movement in general, was heavily influenced by Bruce Lee. I read Tao of Jeet Kune Do, and he preached efficiency in combat. No extra fluff. He called it organized despair, just flourishes for nothing - fighting for the sake of fighting. That's what Tim wanted too, that we'd have just very streamlined fights. Every move was like a breath in the movie, a breath in the script. So I was heavily influenced by the great Bruce Lee. He wrote, "Be like water. Be adaptable. Be able to change and adapt to your circumstances," and I'm liquid metal as the exo, so it made perfect sense to inhabit those characteristics.

I also played the endo in a motion capture suit, which was great because it was an exercise in storytelling without your voice and without your face, so you have to show it through your movement. I tried to play him a little heavier. He had to step with more heft, and that was taken into account. 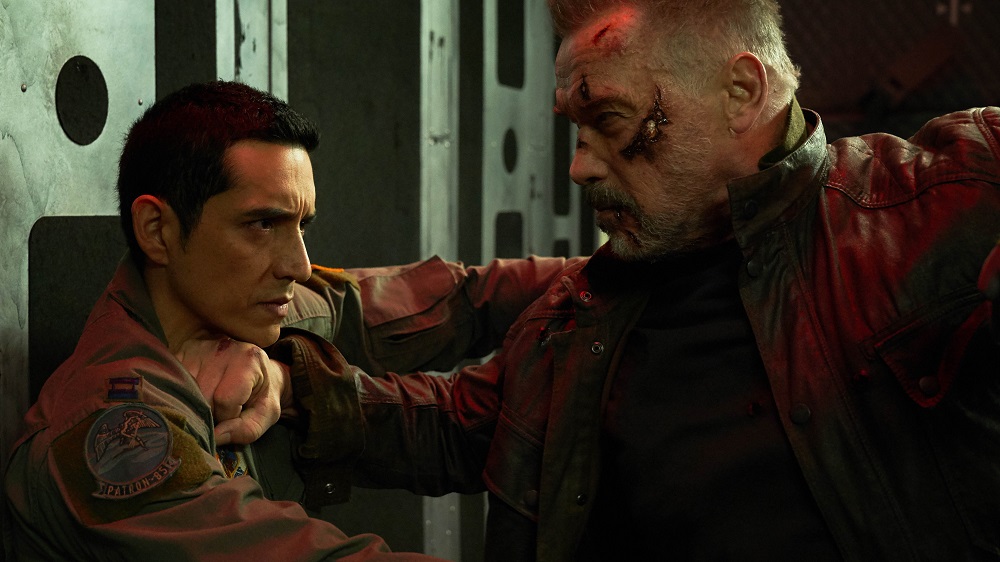 AC: And you have Arnold on hand, so you could always go straight to the source.

GL: Yeah, but contrary to what you may think he was not possessive about the character in any way. He wanted me to discover new things, he wanted me to create something new, and he fully supported me in every way. He was super-generous in his encouragement.

The nature of Arnold Schwarzenegger is that he wants to make everyone around him better, and he wants to lift everyone up to his level so we can see eye-to-eye and work as equals and win together.

He's the most competitive person I've ever met in my life. We were in Korea a little while ago, doing the press tour, and they have all these little games to play. He doesn't really do gimmicks, but Korean television, they like to do games and fun stuff. So they had us, Terminator versus Terminator, doing various different things. They had this little machine that's like one of those punching bag counters that measure your strength, except it's for fingers. So you just flick it and it gives you a reading of your strength. So I flicked it, and got a really high score, and then his chief of staff flicks it and tries it out. He sees that we're posting these scores, and you can just see it in his eyes that he wasn't going to sit it out. All of a sudden he goes, "Gimme that," and we hand it over to him. He takes an open palm and just smashes the thing. It reads 999 - the max, and he goes, "Beat that."

GL: Hey, if you ain't cheating, you ain't trying. He likes to lift the table during foosball. He wants to win.

Terminator: Dark Fate is in cinemas now. For our review and listings, teleport over to our Showtimes page.