Grief is a monster in this fantastic fable, plus two new undead flicks

The hardest lesson in life for a child is learning that there's this thing called mortality. It's even tougher when it's a practical class. In the debut feature of director Anders Walter, I Kill Giants, the only sensible response is to go kill a few monsters, and save this stupid world. It's no spoiler to say that I Kill Giants walks the same path of magic and mourning as Bridge to Terabithia and A Monster Calls in using the fantastical to explore how a teen's imagination can be a powerful shield, a coping mechanism, and an extraordinary way to process the nightmares of the real world.

It's a theme that has dominated the early short work of Walter, who has probed the emotional cusp that is adolescence three times (in "9 Meter," "Katusha," and the Oscar-winning "Helium"). Unlike his peers who use the fantasy elements as something more metaphorical, as a place that the characters seek occasional refuge, for Barbara (Madison Wolfe, embracing the character's spiky, sparky, dismissive tone), this is the world. Her family is fractured, and school is hell, because no one else realizes that the world is plagued by giants and titans who are to blame for every natural disaster. She gets it, she doesn't care if no one else does, and she will save this ridiculous New Jersey seaside town from itself, whether these numbskulls deserve it or not.

Adapting Joe Kelly and J.M. Ken Niimura's wild and captivating 2008 comic (Kelly himself handled the script), Walter replaces the scratchy, kinetic vigor of the print version with a mist-covered grandeur, and a mournful sense of desperation. Even if the audience never believes for a second that the giants that stalk the land are anything other than metaphors for her own school and home life troubles, he makes them so vast, so plausible, that you want to believe they are real.

But beneath that deeply Scandinavian strand of mythology, this is a beautiful story of childhood in collapse. Barbara is the deliberate, purposeful outsider, stalking her town in mismatched clothes and sporting bunny ears, trying to drag her family into games of Dungeons & Dragons, but equally gleeful when they refuse. Her closest thing to a friend is Sophia (Sydney Wade), the new kid in school who is as much of an outsider just because she's English (and, as she points out dolefully, not one of the bits anyone has ever heard of).

Walter's greatest achievement is in keeping Barbara from ever feeling like a spoiled brat, or even delusional. Even when she rejects the compassion of her sister/proxy parent Karen (Imogen Poots in a perfect miniature portrait of emotional exhaustion) or the school counselor Mrs. Mollé (Zoe Saldana, the epitome of an educator's tired commitment to her charges), you intuit why; and when the final component of the puzzle is revealed, he really makes this crazy little girl who believes she has a magic hammer in her bag into a hero.

I Kill Giants (Image Entertainment) is available on Blu-ray now. Also out now: When the zombie apocalypse comes (and, let's be honest, it's probably overdue), then everyone will be caught up in it. When it comes to Britain and zombies, the quirkiness of Shaun of the Dead and the aggressive revisionism of 28 Days Later overshadow all other Armageddons, which could explain why Martin Freeman has to go to Australia for a fresh take in Cargo (currently streaming on Netflix).

In this feature length version of writer/co-director Yolanda Ramke's 2013 short of the same name, he plays Andy, a recently widowed father trying to get his baby daughter to safety before the undead can get to her. Unfortunately, he's in the depths of the Outback, and the reason he's recently widowed is that his wife has succumbed to the virus, and he's sporting a nasty bite that means he's not long for this world either. At least, not as a sentient, living, breathing organism.

Freeman bounces between perfect British resignation and instants of despair, without an ounce of self-pity. This is about a father's journey toward death, and setting his child up for some sense of safety and normalcy after he has gone. In many ways, it's the mirror image of I Kill Giants, and equally uses fantasy as a lens to explore loss.

It's also the diametric opposite to a tragically underseen entry to the genre, 2014's Dead Weight, where the lead character treats everyone around him as disposable. Even in this hellscape, Andy struggles to retain his humanity, even picking up an additional child in peril, teenager Thoomi (Simone Landers), along the way. She's the connecting thread to an important subplot regarding the Aboriginal peoples in this horror show, and a subtly woven message about society's ecological rampage.

Ramke's script plays perfectly as a straightforward survival horror, but there are little hidden ideas and flourishes – not least a truly horrifying new take on zombies that is both physically gross and emotionally wrenching. Yet it's really the tender, tragic, and moving performance by Freeman that keeps Cargo's heart beating. 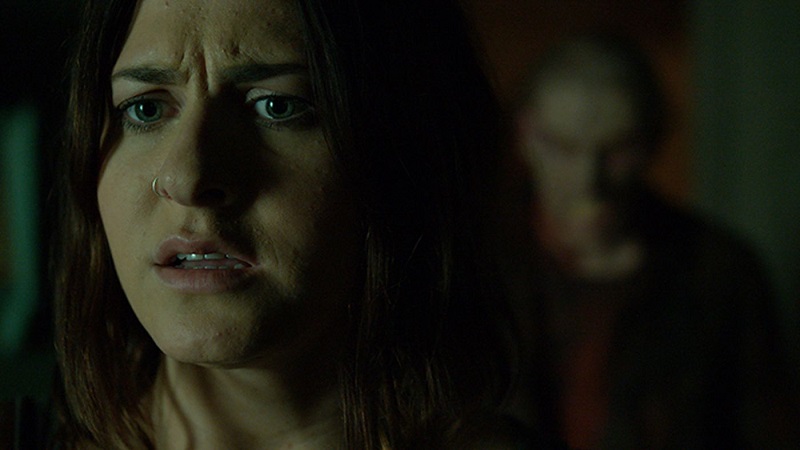 A much more straightforward and gruesome approach to the undead in Feral (on VOD from IFC Midnight now), a wilderness romp that posits its grave-evading ghouls as somewhere between the skittering bloodsuckers of The Strain and the depraved bulldozers of the Stake Land franchise. Fortunately, there aren't many of them in whatever picturesque backwoods this collection of medical students and their partners find themselves in. However, once the biter in the woods gets chomping, their ranks start swelling.

Like Cargo, the tension is in the transformation. It's not an instantaneous change, as redneck Van Helsing Talbot (Lew Temple) tells them, but a miserable, slow process, and the best thing to do is put a round in the infected's head before they can come back. He quickly finds himself at odds with his Halloween remake costar Scout Taylor-Compton as Alice, the closest thing this increasingly mangled bunch of campers has to a leader.

Feral doesn't have an ounce of the subtext or nuance of Cargo. This is much more of a simple midnight crowd-pleaser (which could explain some of the lumpen early dialogue, and the mostly interchangeable supporting characters). However, once the final act bloodbath begins, and Alice and her partner Jules (Olivia Luccardi, Channel Zero, The Deuce) start swinging for the fences, and the practical effects team get to break out the blood bags, it's simple apocalyptic fun.