Two indie horrors tackle how the living contend with death 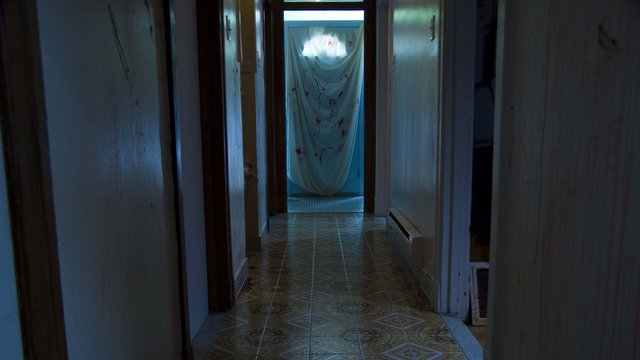 As close to SFW as body horror Thanatomorphose gets

For every restriction that comes with indie horror film making – budgets, scale, resources – there's one big upside. The film maker can take the narrative to darker, more accurate truths than the studio system will ever allow.

Take Canadian director Éric Falardeau: He continues the post-Cronenberg fascination with the skull beneath the skin, but with a level of visceral fascination rarely seen since The Fly or Dead Ringers, In fact, while Cronenberg's son Brandon has inherited his father's satirical fascination with the body as expression of civilization (as evidenced in his debut feature Antiviral), Falardeau's first feature Thanatomorphose taps into the more personal fear that the body is nothing more than a sack of meat and fluids, briefly evading decay.

Housecore Horror Film Festival director/co-founder Corey Mitchell touted this to me as one of the best films he saw last year, but a difficult and harrowing vision. As to be expected from a release by Unearthed Films, this Canadian nightmare is as extreme as body horror gets. The underground horror label is most famous for picking up incredibly obscure/infamous Japanese shock cinema like the Guinea Pig series, but this handles that bloody genre in a subtler way. Where those films (and some can scarcely be lauded with the title, instead being little more than special effects show reels), Thanatomorphose is a disturbing character study.

It begins with a nameless struggling artist (Kayden Rose) and her non-committal and borderline abusive boyfriend (Davyd Tousignant) fucking – an image caught by thermal imaging camera. He abandons her post-coitus after stepping on a nail in her new apartment, leaving her to examine the boxes and detritus of her transferred life. But she soon – and rightly – becomes more concerned about what seems to be happening to her body. Odd marks that seems like more than sex bruises. Hair falling out in clumps. The constant clicking neck. Something grisly and terrifying is happening to her.

The film's title is a portmanteau of two greek words: Thanos, for death, and morphosis, for the change of a body over time. It's arguably a kin to last year's other anti-zombie movie, Hale. Both are about the dead-living, rather than the living dead. Yet that Fantastic Fest title was slow-moving in all the wrong ways. It may have been a technically more accomplished piece of film making, but it was glacial and emotionally disgengaged. Its torpid pacing and tonally erratic somehow fades by comparison to Rose's depiction of mental and physical decline, chronicling her own decay with an artist's maddening accuracy.

Thanatomorphose is low-budget, with every Canadian cent going into the special effects by Canuck FX controversialist Rémy Couture. He puts everything but the stench on the screen, It's in little moments, like the disturbingly realistic way her fingernails peel off – not with the gooey excess of torture porn, but instead with a simple twang and flick of blood. The decay of her body is a complicated metaphor for alienation, despair, fear of aging, terminal disease … the list of potential reasons for Rose's body giving up on evading corruption seems endless. Her closet explanation is simple existential angst. "I've lost the urge to do it," she tells her lover after a dispassionate bout of lovemaking: The 'it' in question seemingly being everything.

Ultimately, it's not a narrative. It's a tone poem, just one whose beats and rhymes are the sound of physical degeneration. Locked in the hermetically sealed narrative environment of her apartment, Rose sees her body melting. Yet the door is left open to the possibility that this is all in her mind, as maggots and blood erupt from a backed-up sink but leave no trace, and her nightmares bleed into her solitary days.

This is brutal and unforgiving stuff, pushing the upper limits of graphic horror. The final hour of its 100 minute run time will simply be too gross for all but the most hardened viewers. Yet Rose's damaged but disturbingly insightful portrayal of the artist's physical and mental collapse is spellbinding. That monomania is probably a good thing: Falardeau is far more skillful in creating bleached-out set pieces and excruciating visuals than recreating something as simple as a party. The only respite comes from the soundtrack, with the dirgeful lyricism of British mortuary historians the Guild of Funerary Violinists and added heavy thrumming via none other than Austin's Black Angels (you may never listen to "Manipulation" the same way again.)

Hardened fans of Unearthed's more grotesque work may find little pleasure here (much of their back catalog is basically grand guignol comedy anyway.) But this is a nihilist's nightmare, the anti-Warm Bodies, with the sickening consideration that, no matter how little is left of Rose's character, she will be trapped in that collapsing mass of flesh. Beyond its grotesquerie, there is a sickening meditation on the women as nothing more than meat in our society – that is, if your stomach can handle it. 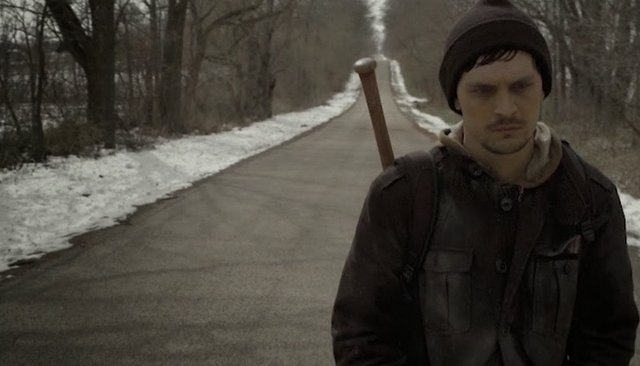 By contrast, lo-fi road movie Dead Weight (Horizon Movies) is all tell and very little show. For their debut feature, co-writers/co-directors Adam Bartlett and John Pata spent three years, on and off, in the woodlands around their home city of Oshkosh, Wisconsin. Charlie Russell (Joe Belknap) is slogging across the Mid-West winter as an unspoken and unnamed infection has laid waste to much of the US. He's trying to get to the remoter city Wausau, where he has arranged to meet his girlfriend Mary Lindberg (Samantha MacReady). Civilization has pretty much collapsed, and so Charlie has hooked up with a band of fellow travelers to help him get there.

It's not exactly a new path they're travelling. Post-apocalyptic road trips are a mainstay of the genre (that's basically what The Walking Dead is, and then The Road gives it away in the title), and in the zombie movie onslaught of the last few years, it's been a great entry point for indie film makers with low to no budget. Arguably the three best examples are rising Hollywood editor Rob Grant's super-lo-fi Yesterday, historical horror Exit Humanity, and the seriously under-rated The Day (unfortunately written off by many just because it was distributed by WWE Films.)

Where Dead Weight distinguishes itself, and makes a real addition to the canon, is depicting exactly how far people will go to reach their destination when all the rules are off. Charlie goes from a nebbish, slightly overly possessive boyfriend to a man on a quest. At what point does his obsession become monomania? And when he says he'll do anything to get to Wausau, the question is, exactly what does that mean? It's like The Big Red One in reverse, as Charlie is prepared to dispose of and use anyone and everyone to get to Sam.

Like Thanatomorphose, this is low-budget, high concept horror. However, at least Falardeau had the sense to lock the action in one apartment, rather than making cast and crew contend with the elements. Dead Weight turns the bitter cold and soaking snow of the Minnesota winter into the most imminent threat facing the survivors. There's no fake foam flakes or CGI breath clouds. The 'making of' featurette included is basically a one hour lecture from the cast and crew (many of whom doubled up on production roles) one how to survive and adapt in those conditions.

As shown in the extras, Bartlett and Pata wisely cut a series of fake and maudlin TV broadcasts, keeping the lens instead on the humans trekking through an unforgiving landscape. it's arguably a lesson they might have learned from the superb African zombie flick The Dead, whose the only error was to show the conflict beyond the protagonist's view. Instead, they center on Belknap's depiction of Charlie's fine balance between hero, asshole and monster. His relationship with Sam, shot in a series of flashbacks, is a realistic portrayal of what happens when one person is more committed than the other. Throw all that tenderness and trauma into the meat grinder of the slow, snow-draped apocalypse, and the result is both touching and chilling.

That sense of character is what raises both Dead Weight and Thanatomorphose above the schlocky quagmire. Where's Rose's unnamed heroine has scarcely a passing interest in life, Belknap's Charlie is a portrait of inhumane obsession. She has given up: He has sacrificed everything that defines humanity in a deranged commitment to love. Neither is easy to watch, and it's not (just) because of the gruesome nature of horror.