It’s probably impossible to have avoided at least a casual acquaintance with Downton Abbey, the howlingly popular British period television series: The press loves it, and pop culture has embraced it, too. There’s no escaping this deluxe soap opera –  and you shouldn't want to. 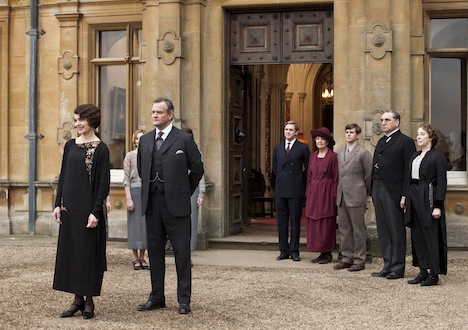 Even if you’ve missed the first two seasons of this addictive melodrama from Julian Fellowes (Gosford Park), you should consider sudsing up alongside already ravenous (and likely costumed) fans of the show this Sunday, Jan. 6, for the stateside rollout of the third season on PBS’ Masterpiece Classic. (British fans – and resourceful American ones – have already seen the whole season, so be best not embark on any season 3 Google searches or you’re bound to be besieged with spoilers.)

You may have already spotted suspect swag, such as “Free Bates” T-shirts, or you've heard friends say things like, “What is a weekend?”, before chortling together. (It is an earnest question posed by the inestimable Maggie Smith as The Right Honourable Violet Crawley, Dowager Countess of Grantham, and it appears on several available coffee mugs.) These persons that resemble your friends are firmly in-world: the post-Edwardian world of The Earl of Grantham, that is, one Lord Robert Crawley (Hugh Bonneville), whose life's custodianship is the survival and benefit of Downton Abbey, the Yorkshire seat of the estate entailed in his title. Also entailed, irretrievably, are the means that support Downton, the dowry of the current Countess of Grantham, American-born Lady Cora (Elizabeth McGovern). Titled Europeans, their family fortunes long-spent, trolling American shores for an heiress is and was a familiar custom, and so it was with Robert and Cora. In an intimate bedtime segment from the first season (or "series," in British terms), Cora reminds her husband that he did not fall in love with her “until approximately a year after we were married,” a fact that continues to shame Lord Grantham. 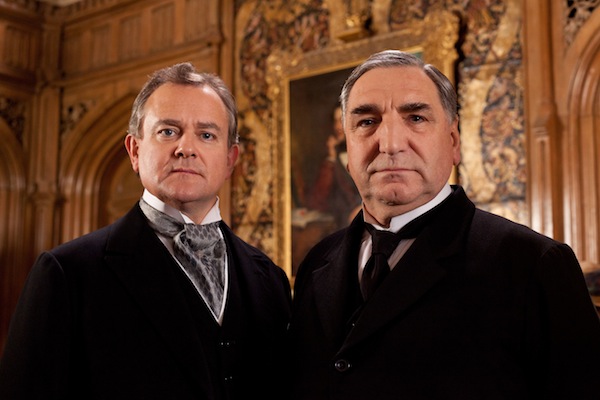 The Earl of Grantham (Hugh Bonneville) and the butler, Carson (Jim Carter)

Lord Grantham presides benevolently over sprawling estate, the household of which is run by the Dickensian butler, Mr. Carson (Jim Carter). The contrast between the interdependent worlds of the staff "below stairs" and the privileged above does not rankle, but instead weaves a set of human dramas – between husband and wife, cook's helper and Dowager Countess, footman and houseguest. It doesn't surprise that Lady Sybil (Jessica Brown Findlay), the youngest of Robert and Cora’s three daughters, who likely grew up with her maid, would naturally conspire to help her apply for secretarial jobs, as well as cover for the maid's absence. Women were taking jobs suddenly, and there was talk of The Vote. While some have suggested the Crawleys’ story represents the beginnings of modern family life, this writer is still trying to discover what the toilet situation was, since plumbing seems like a fairer gauge of what is modern. (On the “History Talk” forum of fan site Downton Abbey Revisited, one amateur historian gets down and dirty on the topic of Edwardian hygiene; it’s fascinating stuff.)

Much of the tension in seasons one and two surrounded the spark between the Crawleys' eldest daughter, Lady Mary (Michelle Dockery), and the Earl's heir, Matthew Crawley (Dan Stevens), as their quarrelsome relationship belies a growing romance. It is only after WWI, a broken engagement, and the convenient death of Mary’s rival that they have finally fallen into each others' arms on New Year's Day of 1920 and resolved to marry, as seen in the Christmas special that concluded season 2. Their engagement would be of vast relief to Mary's parents, as her marriage to the heir will save Downton Abbey from the accession of a stranger, as well as ensure that Mary inherits, if indirectly, the family fortune. Apparently the road won't be an easy one for the couple this season, and the addition of Shirley MacLaine as her ladyship's American mother, Martha Levinson, provides an added drawn breath.

Complicated backstories aside, It doesn't take long to feel right at home in the world of Downton Abbey, so immersive is the production value itself, which is first-class in acting, direction, design, cinematography, and writing. Though Masterpiece Classic, as America's longest-running weekly prime time drama, has produced other fantastic worlds in series such as The Six Wives of Henry VIII (1971) and The Jewel in the Crown (1984), we connect with the Crawley family for personal reasons. For one thing, post-Edwardians look and sound like us. The disaster of the "unsinkable" RMS Titanic, which opened the series; the onslaught of demanding new technology like that "nerve-shattering telephone" and electricity in the walls, which provided an eerie light (and was likely releasing toxic vapors, according to the unconvinced Dowager Countess, at least); as well as the perennial uncertainty that settled in with the first World War, as Britons lost a generation on the fields of France – all this evokes the same uncertainties we face, and the conveniences we enjoy, in contemporary times. 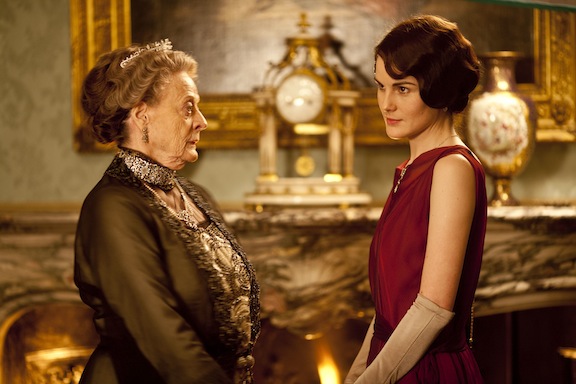 Not surprisingly, both official and unofficial tributes abound like dropoffs for dead royalty. Of the books available, we like The Unofficial Downton Abbey Cookbook: From Lady Mary's Crab Canapes to Mrs. Patmore's Christmas Pudding – More Than 150 Recipes from Upstairs and Downstairs by Emily Ansara Baines (Adams Media, $21.95). Also for your consideration are Downton Abbey: The Unofficial Guide to Season Three (BookCaps Study Guides, $4.99); The Butler's Guide to Running the Home and Other Graces by Stanley Ager and Fiona St. Aubyn (Clarkson Potter, $21.99); and, in a says-it-all title, The Real Life Downton Abbey: How Life Was Really Lived in Stately Homes a Century Ago by Jackie Hyams (John Blake, pbk $12.95). Also noteworthy is Agent Gates and the Secret Adventures of Devonton Abbey, a graphic novel by Cameron Subhiyah and Kyle Hilton (Andrews McMeel, pbk $14.99). Our favorite irreverence in paper, however, has to be Vulture's Downton Abbey printable paper dolls, which one can literally hack for the purposes of greeting cards, place card holders, and bookmarks, to name the tip of that iceberg. As for official ephemera, consider The World of Downton Abbey and The Chronicles of Downton Abbey: A New Era by Julian and Jessica Fellowes (both from St. Martin's, $29.99).

Season 3 of Downton Abbey premieres locally on Sunday, Jan. 6, 8pm on KLRU and continues Sundays through February. And check in Mondays to the Screens blog for our weekly recaps.