'Downton Abbey' and the 'Desire of Suitors'

Mary is beating suitors off with a stick 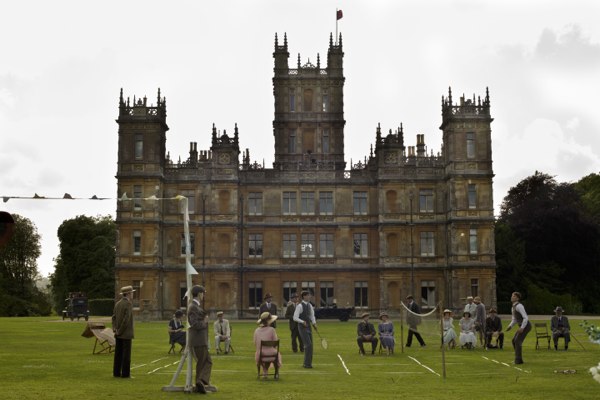 Hello, my dearest readers. So sorry to have abandoned you last week, but I was overwhelmed with deadlines and unable to make our usual Downton Abbey appointment. Here’s what we missed:

• Lord Grantham was called to America to help get Cora’s brother out of hot water.
• Isobel nursed an ill Violet back to health, which deepened their friendship.
• Mary flopped around in pig filth with Mr. Blake, which in some countries means they’re married.
• Tony “Lord” Gillingham came back to Downton with his evil rapist valet, whom Mrs. Hughes confronted about his evil raping ways. Of course he denies it, and Anna is deeply uncomfortable.
• Aunt Rosamund smells a rat re: Edith, and says, “you seem so préoccupé lately.” (That’s French for “rich people’s affectation.”) Edith spills the beans, goes to get an abortion, but changes her mind. 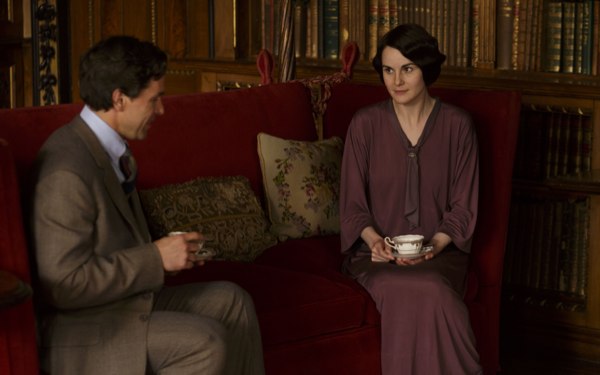 Got it? Good. Let’s proceed with Part 8. This is a pretty juicy episode, being the season finale of sorts, so strap in. (The “Christmas special” is technically the season finale, but that is typically a standalone episode.)

Cora’s brother has gotten embroiled in the Teapot Dome scandal. Turns out Mr. Levinson owns one of the companies caught paying bribes to Secretary of the Interior Albert B. Fall to drill for oil on government land in Teapot Dome, Wyoming. Thanks, Downton Abbey, for this American history lesson! This, of course, leaves Cora to plan the church bazaar without LG’s help. Because I’m sure he’s always a huge help in every way. 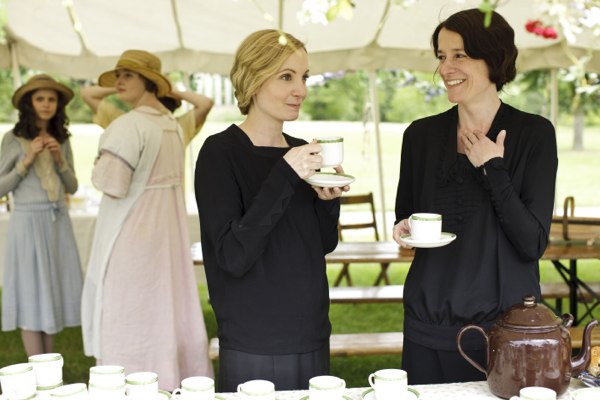 Mr. Blake, with whom Mary is much more comfortable now that they’ve thrown pig shit into each other’s faces, has reached the end of his study time in Yorkshire and is headed home. And just so that we don’t forget that this is a soap opera to its very core, Mary tells Anna that Tony “Lord” Gillingham is returning to Downton to break his journey home. When Anna turns green around the gills, she’s forced to tell Mary that it was Mr. Green, the valet, who attacked her. Mary is understandably shocked and wants to tell the police, but Anna’s hell-bent for leather to keep it under wraps and keep Bates away from Green because she knows he’ll figure it out, kill Green, then get himself hanged. Yes. We know this. You tell us this every episode since it happened. WE GET IT. (P.S. Bates can totally tell that something happened with Mr. Green, because Anna no longer jokes and laughs with him when he’s around.) (P.P.S. Tony tells Mary he plans to call off his engagement, but Mary tells him that she’s not on the market, for realsies.)

Later on, Mary decides to tell Tony to dismiss his valet so that Green can’t terrorize Anna at Downton on future visits. Tony later arrives at the bazaar to report that Mr. Green is dead, having fallen into traffic in Piccadilly.

Related: Bates takes a mystery day off while Anna is in London with Mary.

Ivy receives a letter from Alfred reporting that his dad’s died and also inviting her to a) marry him and b) leave Downton and join him in London. She does not want. Despite sending him a letter to this effect, he plans to come to Downton anyway. Mrs. Patmore takes this opportunity to let Daisy take the day off to go see Mr. Mason, who advises Daisy to say goodbye to Alfred. “Leave nothing jagged, nothing harsh between you,” he says. Aw, he’s salt of the earth, that Mr. Mason. I see what you did there, Julian Fellowes. She brings back a basket of goodies for Alfred and promises lifelong friendship to him. He leaves and dear god I’m glad to see the back of him and this tortured storyline. 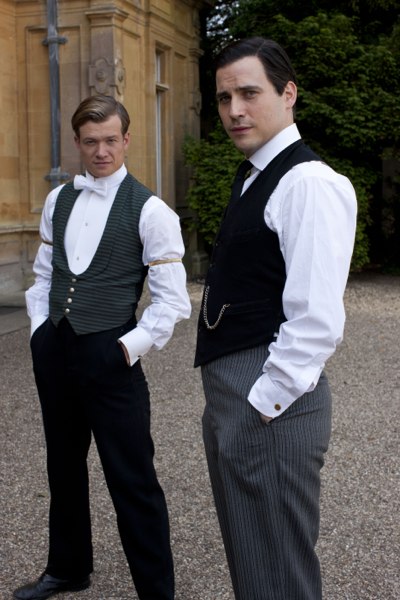 On a trip into Thirsk, Branson spies Rose having tea with and stroking the face of Jack the Black American Jazz Singer. He reckons this situation will make some people unhappy. (The narrative also presents Branson with a potential love interest/philosophical sparring partner in Sarah Bunting, a local schoolteacher whom he met at a political meeting in the previous episode.) Anyhoo, he tells Mary what he saw; Mary confronts Rose about it and warns her not to lose control of her life. Rose fancies herself progressive and anti-imperialist in that she plans to marry Jack and have lots of progressive mixed-race babies in 1920s England and is going to tell Mummy of her plans straight away. Yep, totally in control of her life, that one. She later tells Mary that she’s engaged to Jack. Mary goes to visit Jack in London, where he tells her that he plans to break off the relationship because he is realistic about the world they live in.

Meanwhile, Edith reckons she can have her baby, then adopt it out to some tenant farmers at Downton who have been trying unsuccessfully to have a child (and who are also charged with the running of the new pig operation). Aunt Rosamund thinks this is reckless and reckons Edith should have the baby abroad and adopt it out there, but Edith wants to be a part of its growing up. This gives rise to a rather hilarious scene in which Rosamund says to Cora, “I have this plan. I’ve always wanted to … speak better … French than I do." (Ha! Because her daily speech isn’t affected enough!) "So I thought I’d take a few months off and go to … Switzerland … and really learn it.” She’s totally making this up on the fly, à la Jan Brady and her boyfriend George Glass. She wants to take Edith with her because it’s cleaner than France, is void of French people, and has good hospitals. You know, in case they get ill. Cora, such a sanguine lady, is all for it, exclaiming, “Golly! Life is full of surprises!” If she suspects anything, she masks it well. Violet compares Edith’s upcoming sabbatical to Lord Gillingham “thinking his way around the Highlands.” If only it were that simple for women. (P.S. Violet totally groks what’s up with Edith and calls her and Rosamund on it at lunch. Sharp old lady is sharp.) 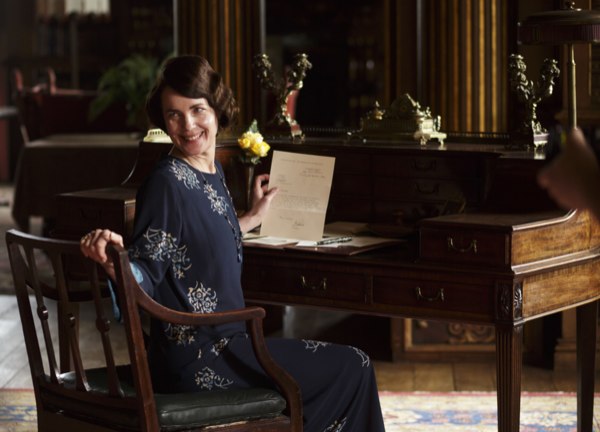 Speaking of women, as Mr. Baxter, Evelyn Whatsis, and Tony “Lord” Gillingham all depart from Downton, the women (Mary, Rosamund, Edith, Cora, and Rose) are lined up outside to see them off. You see that the women’s color palette is shifting from purples and mauves to shades of blue, gray, and pewter accented with creams and browns. I’m not sure if the costume designers are making these choices à la Vince Gilligan and Breaking Bad, but it is noticeable, and I’m hoping someone somewhere will write a think piece about it. Anyhoo, the ladies tease Mary about the carful of suitors driving away, calling it a “desire of suitors.” Har-dee-har-har, says Mary, plus whatever the genteel version of “go eff yourselves” is.

Isobel is invited by Violet to stand in for the family at luncheon with Lord Merton, who seems interested in her. He later sends her a magnificent bouquet of flowers, and the two old-lady friends have a bit of a giggle over it. (But is Violet a wee bit jealous? Surely not.) 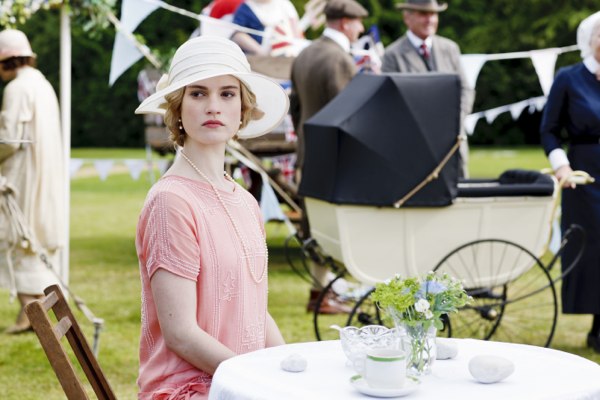 LG returns from America just in time to enjoy the bazaar. Because of course he does. Mr. Baxter also comes to the bazaar, under the pretense of just having come from a conference nearby, in order to make his feelings for Mary known. He, too, vows to fight for Mary’s love, which means that season 5 will invariably feature a cage match between him and Tony “Lord” Gillingham. (My money’s on Tony, mostly because he's way sexier than Blake.) Tony asks Blake for a ride home to London, Mary sees them off, and LG says, “What sort of menage has that turned into since I’ve been away?” Everyone shrugs disingenuously, and we’re done here.

See you next time for the Christmas special, which features the triumphant return of Shirley MacLaine with bonus Paul Giamatti! Yay!

Dowager Countess Zingers: To Isobel, who enters the room saying, “It’s only me.”: “I always feel that greeting betrays such a lack of self-worth.” To Edith, discussing the trip to Switzerland: “Switzerland has everything to offer, except perhaps conversation, and one can learn to live without that.” Of Rosamund’s plan to act as Edith’s patron during her baby-having sojourn: “She’s done quite enough as it is. Take any more, and she’ll start exacting annual tribute.” 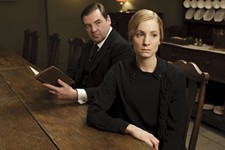 Downton Abbey: The Holy and the Broken
There, there, Anna – you'll feel better before the hour's up