Looking for a comedy to spice up your Saturday? Something with music and glitter and queers? Then you’re in luck, because a big gay musical is debuting in Austin this week. Every Saturday from July 14 to August 25, Big Gay Musical: An Improvised Super Super Gay Musical will take over the Hideout Theatre. 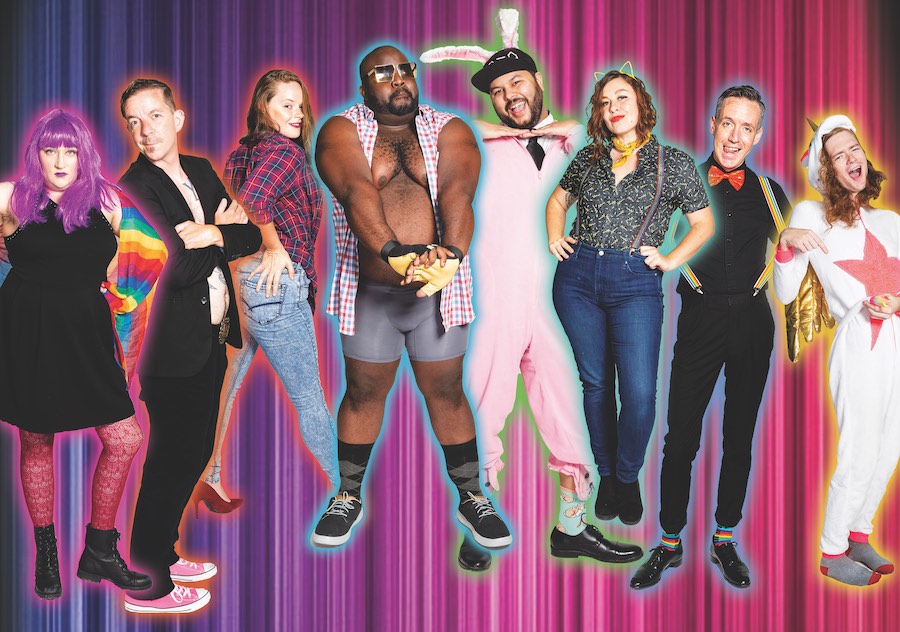 Unlike your typical comedy, the entire play will be improvised, from the characters to the music, with an entirely queer cast and crew.

As the name suggests, the show is a tribute to the original The Big Gay Musical film, but the audience can expect some new and exciting twists. For one, BGM is made for the queer community by the queer community. The show’s director Bridget Brewer told “Gay Place” she wanted to produce a show that would offer “visibility” and “voice to identities that aren’t often talked about or represented in improv shows, much less musicals.”

To achieve that goal, Brewer decided to cast an all-LGBTQ producution, which she called a necessity to ensure as “many facets of the queer experience” are brought to the stage as possible. But aside from their rainbow status, the show’s stars come from diverse backgrounds and many have both musical and improv training. Brewer says the troupe’s different levels of familiarity in theatre make for an exciting and interesting energy on stage. “The music in this show really snags at those heartstrings and prods your funny bone. It’s truly a beautiful thing to behold!”

Each week, BGM will be different from the last, giving every new audience its own personalized experience. And while the show is not short on pizazz, it’s also embodies vulnerability. “So often, individuality, immediacy, and space aren’t typically afforded to unabashedly queer works,” explains Brewer. The improv aspect works as a tool to highlight real queer stories in meaningful ways, but she also sees it as a means to connect queer performers and storytellers with a diverse LGBTQ audience – without having to entertain the curiosity of a heterosexual crowd. “A lot of queer content still centers around heterosexuals and is primarily marketed to a hetero audience. But don’t you just wanna watch a queer person live their full queer fantasy?” Brewer wondered.

If that wasn’t enough, each of the seven shows will collect money for a different queer organization – including OUTsider Fest, Out Youth, and Central Texas Transgender Health Coalition. Money will be raised through online donations, advertisements at the show, and via a hat pass-around. For Brewer, this was a major goal: linking audience members to a greater swath of Austin’s queer community and growing support for local nonprofits.

Sure, each show will be different, but “no matter what, you’ll spend [time] connecting and empathizing and laughing and singing with other human beings,” said Brewer. “Oh, and getting drenched in glitter. Always the glitter.”

The Big Gay Musical plays every Saturday, 8pm at the Hideout Theatre (617 Congress), July 14-August 25. You can also donate to their causes online.