Queens, kings, and clowns from near and far wow at Drag Village

Queen Friday VIII from San Antonio really strutted her stuff this past Friday. In fact, she might be one of the most underrated queens to perform a set at the fourth annual Austin International Drag Festival’s Drag Village at the Holiday Inn. 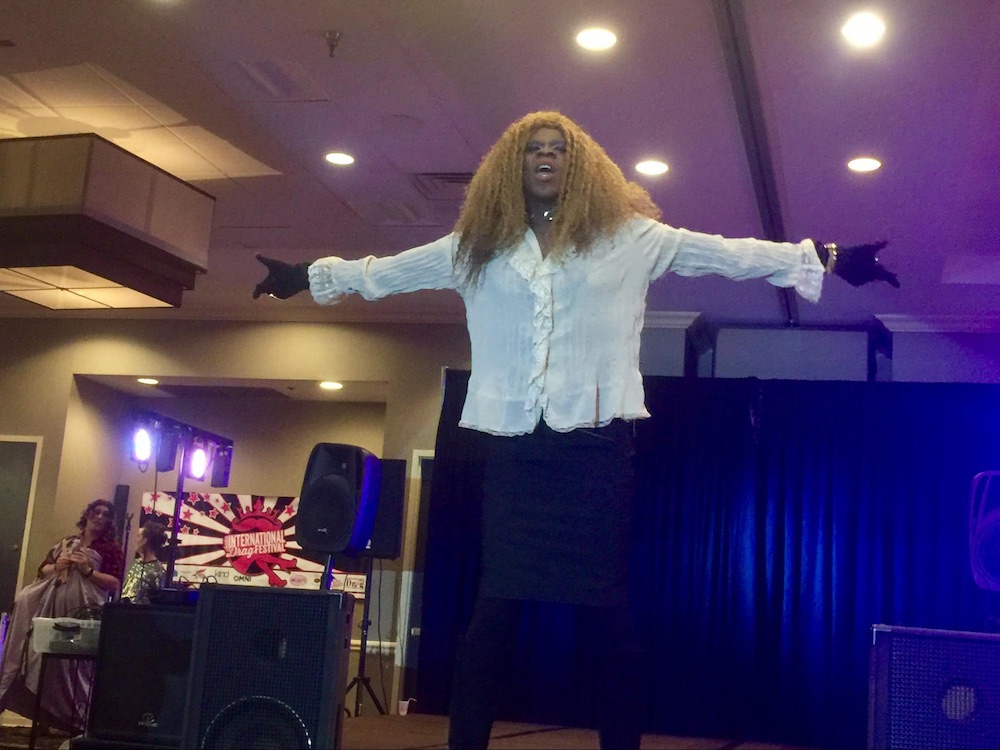 Her outfit was certainly atypical of most drag get-ups. Where most queens sport elaborate, sequin-adorned gowns or one pieces, Friday VIII wore what I’ll call “normcore": a white blouse with a black knee length skirt and plain pumps. It’s a style that would most typically suit a desk job. She also wore a long, blonde crimped wig that was seemingly an homage to Beyonce’s iconic hairstyle. Ironically, her plain costume choice certainly made her stand out against the rest of the performers.

The contrast between Friday’s look and other queens became more noticeable when queen Sabrina Kinkade controlled the stage. Sabrina’s festive sequined dress, Christmas light earrings, and shiny silver bob hairdo made for an interesting juxtaposition – especially in addition to her clever song of choice, “I Want a Hippopotamus for Christmas,” which received a collective chuckle from the audience. Friday started off on the catwalk to Evelyn “Champagne” King’s hit song, “Love Come Down,” performing both a sassy and emotional dance and, of course, many hair flips. Then, in the middle of her performance, the song took a drastic change to a familiar movie dialogue: a voice clip from Jordan Peele’s Oscar award winning film, Get Out. Catherine Keener’s voice addressed the crowd, “Now sink to the floor. Sink.” To which Friday VIII executed a flawless death drop, which was met with well deserved uproar and applause.

Friday’s performance defied drag conventions while weaving together slight social commentary, making it one of the most enjoyable and interesting walks of the evening.

The following day, just outside the Drag Village, several festival performers and attendees would congregate for fresh air after spending hours watching fabulous drag stars perform their sets done-up in glitter and make-up.

I approached one person dressed in drag attire who turned out to be Harrisburg, Penn., native Maxwell Treats, also known as Mister Treats to many of their followers. Treats founded the popular drag troupe Sundae’s Best in 2015 with co-member and queen Felicia O’Toole. Other members include Bryce Ricca, Mistress Lilith, Jaxknife Complex, and Austin's very own Chique Fil-Atio – an eclectic troupe of multi-talented queers. According to Treats, Sundae’s Best considers itself a punk and variety drag show with all kinds of theatrical elements, including acrobatics, comedy, dance, and storytelling.

Treats, with the troupe, came to Austin both as a fan and performer – they took the stage at the popular and local queer establishment Hive Mind Hair Co. (coincidentally co-owned by Chique). The show combined live drag, burlesque, geek, and kink. And like the troupe they travel in, Treats is a unique drag performer, who identifies as nonbinary in and outside of drag. In fact, they refer to themself a “drag clown,” as opposed to a king or queen complete with clown-esque make-up. In life and performance they present feminine, masculine, and all the characters that may exist between.

Saturday's Sí Se Puede! Wants to Mobilize the Vote
"It's about time we had a Texas senator who looks out for all the people"