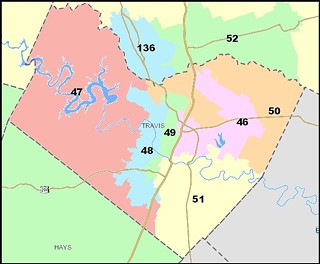 House District 50: Mark Strama's vacant seat, back up for grabs on Nov. 5

When Mark Strama resigned from his Texas House seat earlier this month to become head of Google Fiber's Austin operation, a special election to finish his term was inevitable. Now Gov. Rick Perry has set a date: November 5.

Fortunately, there is already a long line of Democrats ready to jump into the fray. There are currently four names in contention.

• Municipal Judge Ramey Ko. An active local Democrat, Ko has spent the last few years heavily involved in raising Asian-American political engagement in Travis County:
• Contractor Jade Chang Shep­pard. A ballot box newcomer, she was touted as a possible challenger to Rep. Dawnna Dukes in 2007.
• Greater Austin Hispanic Chamber of Commerce secretary Celia Isra­el. As a consultant, Israel is a fixture in local Hispanic politics. However, she lost her sole campaign to date: A 2004 challenge to Commissioner Ron Davis
• Attorney Rico Reyes. A former Travis County assistant dis­trict attorney and ex-marine, Reyes' campaign will probably be most rooted in the Pflugerville end of HD50.

It is pretty inevitable that there will be a Republican challenger to the seat. HD 50 wasn't too heavily gerrymandered during the last round of redistricting, but there were undoubtedly some tweaks (most especially some swaps with Dukes' neighboring HD 46) intended to make this bluish-purple seat a little more crimson.

Of course, whoever takes the seat, it will be a slightly Pyrrhic victory, as they will be straight back out on the campaign trail for the general election in November 2014. However, holding the seat, even after a special, gives the winner an undeniable incumbent's edge.