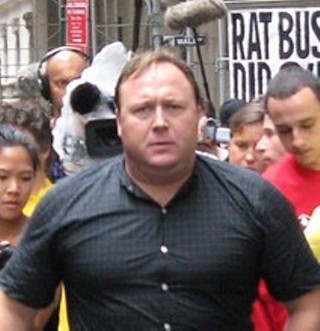 Perhaps bored of playing Where's Waldo with the Boston bombing photos, conspiracy demagogue Alex Jones has aimed his sights at new bogeymen – transgender people. On the April 30 edition of his radio show, Jones launched into a rant about transgender rights. As usual, his mind was in the potty.

Running through a litany of offensive tropes, Jones frets that his daughters will grow up in a country "where some transvestite comes walking into the (restroom) hopped out of their brain on drugs vomiting and crapping all over the place." Although Jones (unconvincingly) insisted that he has no problem with people "that think they’re a woman or a man or whatever,” he dismisses transgender equality as "fake rights" dreamed up by a "globalist mafia." He then makes a barely veiled reference to the late Austin icon Leslie Cochran – not transgendered, by the way, simply a cross-dresser, although Jones's feverish imagination never nods to such distinctions.

I dealt at Access TV with a famous Austin transvestite, who died a few years ago, who they're talking about building a statue to, going in the bathroom, men and women, and vomiting all over the walls when they would do whatever they were doing in there. I mean, I'm talking about several transvestites cramming their way into the men's bathroom, the women's bathroom. You'd go in there to comb your hair before you went on air, there they were. And they finally got thrown out of there because of it and said it was because of discrimination because they were transvestites. No. It was because whatever they were injecting in there made them throw up all over - I mean imagine every week throw up all over the walls. And then I had an office by this guy. The bad luck is I had an office where we would look down, turned out he lived around the block, and I would have to watch him every day in the cheerleader outfit, through my office window, on the air, doing deals and stuff in cars and stumbling around everywhere. And then I'm not a trendy because I don't bow down. I had to go in their store, there was a grocery store next door … you know with crap dripping down his leg, stinking. And I'm supposed to just go 'oh, you're a trendy with rotten teeth hanging out of your head, and a weird bald head, you're in a dress. Here, here, here, here, please, please more diarrhea running down your leg.

It should be noted here that Alex Jones is the worst. If there's a war going on for minds, he has obviously lost his. The full recording is below from Media Matters.