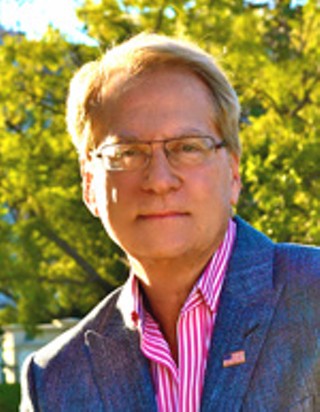 Larry Klayman worries about the trees in the forest

Mark Sanford gives a history lesson, Larry Klayman goes on a witch hunt, and John Carona has some labor pains. Responsibility is on the News Ticker.

• The Texas Lottery Commission has an itch that the Texas House will no longer scratch.

• No one seems to be particularly alarmed that an explosive device was found in an Austin building.

• The Austin Parks and Recreation Department has partnered with the Smithsonian Institution to bring more exhibits to Austin. But why make it such a one-way street? Word is a certain spit guard is about to go to auction.

• According to a photo being circulated via social media, a lawsuit has been filed against the West Fertilizer Co.

• Gov. Rick Perry wants to make it clear that oversight was not the problem. It's not like plant conditions could have changed much in seven inspection-free years. Things move slowly in Texas, like molasses out of jar.

• And besides, mega-birther Larry Klayman already has this one figured out. It was the Muslims! They're everywhere - Oklahoma City, the Branch Davidian compound, Kim Kardashian's womb. Stare at this magic eye for a couple of hours. Uh-huh, Muslims.

• Although the lamaze session was a bit huffier than he expected, Sen. John Carona is glad to have given birth to a big "ugly baby."

• Meanwhile, the Senate has decided that maybe Robin Hood was on to something. He just needed to do everything in reverse.

• According to the New York Times, the Texas bluebonnet season means one thing - rampant crime.

• They stop off at Cinnabon on the weekends. Maybe they sprinkle it on a frappé, thinking it's all a joke. Soon they are shoveling spoonfuls of the stuff down their ever-hungry gullets, oblivious that they are causing America's latest health epidemic.