News from Congress for New Urbanism

At fascinating back-to-back sessions here at CNU17 – the 2009 Congress for New Urbanism big meet-up in Denver – we got an earful about CNU's latest federal legislative lobbying. At the lobbying forefront are two Austinites, former state legislator Mike Krusee and former CAMPO board member Scott Polikov (now residing in Ft. Worth). "This is one of those moments to step up and articulate what urbanism is worth to America!" urged Scott Bernstein of the Center for Neighborhood Technology.

"The biggest urbanist in the White House is Barack Obama," said John Norquist. In a nutshell, CNU is drafting legislation that would reform the criteria by which metropolitan planning organizations – like CAMPO – spend federal transportation dollars.

They're not trying to simply educate legislators; CNU is in the midst of a fast-track direct engagement campaign, to affect the language of drafted legislation. "We're at the nexus of a lot of very important bills that are making their way through the legislature now," said Polikov. With new climate change legislation moving forward, and a new transportation bill right behind it, the moment is ripe for CNU to affect national reform. No other national group is working on this exact issue, said Polikov. The pitch: Organize development patterns so that people can get everywhere they need to go, in a more efficient manner, to spend extremely limited transportation dollars most effectively.

"The entire transportation funding system for this country is broken," Krusee told the assembled CNUers, and he and others on CNU's legislative committee propose to fix it.

CNU has always been about fighting suburban sprawl, offering an alternative by designing dense, walkable, transit-friendly communities like the beloved smaller towns of yore. (The new urbanism is really old urbanism rediscovered, and traditional neighborhood development.)

"We've financed roads with no consideration for how people used roads," said Krusee. As a result, suburban sprawl hasn't paid its own way, but has disproportionately burdened taxpayers and sucked dry transportation funding with demands for ever more, and more expensive roads.

Instead of merely "congestion mitigation," the MPO's charge needs to be expanded, to reduce VMT's (vehicle miles travelled) said the speakers. "The fundamental problem of the last 50 years is that allocations reinforce failure," said Krusee. Right now, the more inefficient a region's suburban, sprawling development, the worse the problems it creates, the greater the need – so the more transportation dollars it gets. Added Polikov, "That's why just spending money on transit isn't enough; you have to change the charge of the MPO's.

The solution looks something like this: All areas in the country get designated as one of three: 1) compact urban, 2) suburban, 3) rural. Then, requests for federal transportation funding are prioritiezed in that order. To move up on the list, a proposed project needs to be in a compact urban area – so those will increasingly become the projects submitted for funding.

The CNU advocates believe this one wholesale change can go a long way toward transforming growth patterns across the U.S. Rather than rewarding suburban sprawl, the new funding criteria would reward regions that get it together to submit highly efficient roadway and transit projects that serve dense areas. 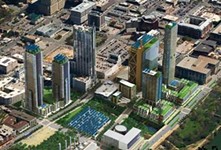