Aldous Harding doesn’t seem of this world. She took to Mohawk’s inside stage a little after 11pm Monday dressed entirely in white – from her sneakers to the way her eyes rolled in the back of her head. The New Zealand singer hunched forward, fingers nimble on her electric guitar, and immediately hushed the full room with wartime ache “Swell Does the Skull.”

Three seconds in and we were all fully immersed in the strange, dark sea of Harding’s work. 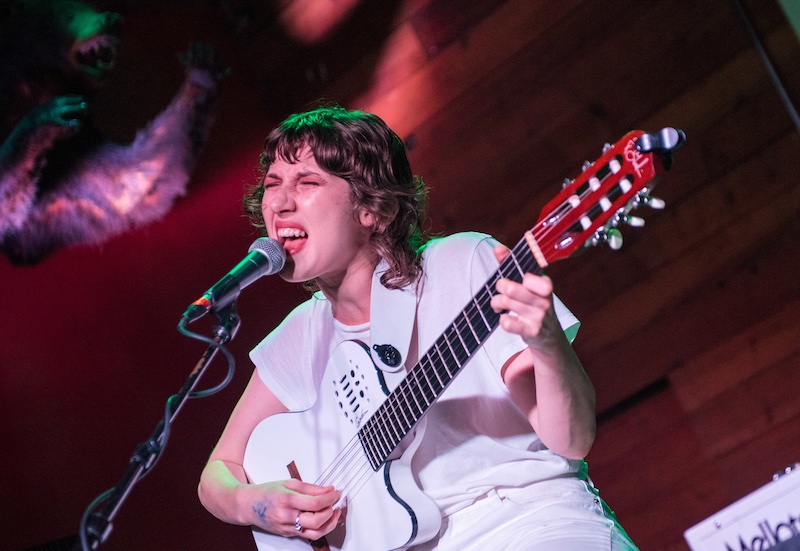 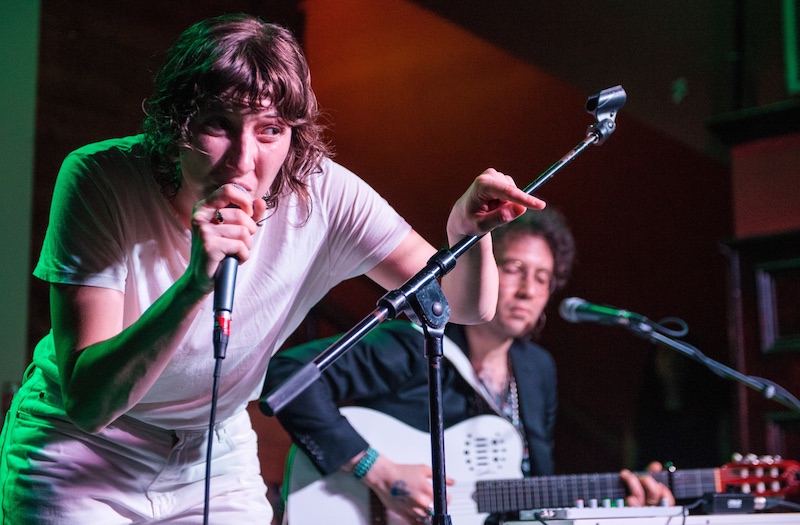 Taking mostly from Party, her sophomore LP and 4AD debut, the performance lasted nearly an hour in rapt silence, the artist Invisible Familiars accompanying on keyboard, occasionally guitar, and harmonies. Harding’s musical arrangements are sparse and slow-moving – and, in some ways, unessential, since her enormous, raw voice and arresting live presence drive the Harding machine.

Plucking away on the mournful “I’m So Sorry” and a melancholy cover of Paul McCartney’s “Single Pigeon,” which she noted as her favorite song, Harding’s aesthetic fell somewhere between gothic folk and a minimal nod to the brilliant mania of Kate Bush’s jarring, cerebral work.

“Blend,” introduced as being about the singer’s father, played out both sleepy and violent, gentle guitar line and quiet drum machine under Harding’s tense vocals insisting, “You’re the perfect man.” Piano-driven single “Imagining My Man” switched over to guitar, the crux of it hanging on its author’s simple, belting admission, “I do not have the answer!” The opening piano chords of sprawling, throbbing ballad “Horizon” elicited several excited shrieks from the audience, a highlight of Harding’s expert intensity.

In a recent New York Times profile, Harding wasn’t forthcoming about her songs. And not out of privacy; she admitted listening back to her work and wondering where it all came from. Live, her body language – either curled up into the guitar, or rigid at the mic – is at odds with that lofty, explosive voice.

Harding’s music taps into dark, primal emotion from the deepest parts of a psyche. She finds it, beckons it, and then it moves through her. Consider her a vessel for some sort of otherworldly force, even if she’s so obviously in control of it.

Blue-green eyes wide and unblinking, she held her gaze with members of the audience throughout. During the peculiar “What if Birds Aren’t Singing They’re Screaming,” Harding locked eyes with me for what felt like an uncomfortable eternity. I was torn between wanting to look away and wanting to be seen by her.

There was something quietly confrontational in the way she performed, in her fierceness as she poured herself out onstage. Yeah, you can take this from me, get a glimpse into my world, her steely, contorted expression seemed to say, but what are you gonna give back?

As suddenly as Harding’s spell had been cast, it was over. She offered a warm smile and a thank you, transformed back into a human, a young woman pleased with an engrossed audience and darted up the stairs into the green room.