Remixing Against the Storm

Perennial Austin Band of the Year contenders keeps it RE:AL

The annual New Year’s Eve edition of Body Rock ATX at Empire Garage by Riders Against the Storm remains in contention for party of the year. Now, the local hip-hop duo turns its attention to Alabama Shakes, whose “Don’t Wanna Fight No More” the husband and wife duo of Chaka and Qi Dada decided to remix. Its opening guitar riff became the life-affirming “RE:AL.” 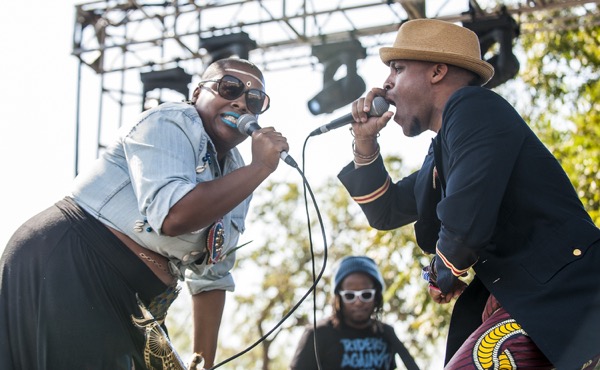 “The hook addresses our feelings about the state of things in the world, and how we feel the need to stand together despite the preponderance of fear mongering, reality TV politics, and divide-and-conquer-distracting media plays. Don’t get caught up. It’s up to us. The time is very real. But, we can’t go nowhere.”

The new track belongs to an upcoming mixtape called RE:mixtape, which drops February 11 – the duo’s ninth wedding anniversary. It’ll feature a remix from folk/soul singer Lianna La Havas, plus contributions from ATX electro act Roger Sellers (Bayonne), and French/Cuban twin duo Ibeyi. In a similar vein as Childish Gambino’s (and others’) early work over indie tracks, Riders look to take the formula toward a higher plane.

“It’s gonna be a real mixtape – not just rapping over beats,” explains Chaka. “I’m talking circa 1994, when there was musical flow and variety. This will be something you want to listen all the way through, and cruise with.”

The mixtape itself is pretext for an even larger project: Cornerstone, RAS’ debut full-length. Scheduled for an early summer release, the LP won’t interrupt the group’s hosting duties. Thursday, Jan. 13, they bring nationally buzzing NYC “iya-soul” duo Oshun to Sahara Lounge. The name pays homage to the Yoruba River deity, which “represent[s] elements of femininity and womanhood.”

Way to keep it “RE:AL,” RAS. And if you want to make Riders Against the Storm the Austin Band of the Year three years running, vote in the Austin Music Poll, which opened Friday.