What to expect at the farmers markets tomorrow 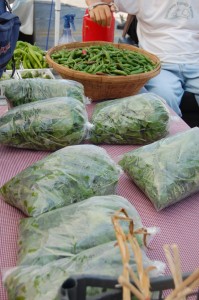 Well, I will be the first to admit, there are some defects to the system of writing the Farmers Market Report the day before the market, and here is one of them: there was no lettuce at last weeks market, even thought there had been plenty the week before.

I asked Flint Rock Hill, and they said that the plants had suddenly all bolted and gotten bitter (because it is too hot in August for lettuce to grow normally). But! That out-of-season lettuce was great while it lasted!

My solution last week was to pick up a bag of baby arugula from Simmons Family Farm at the Downtown Market. Because a) apparently it is cooler out there in the country, and b) it is “baby”, it is reasonably sweet and not too spicy, and makes a perfectly cromulent lettuce substitute. I have been eating salads with it all week. Johnson’s Backyard Garden also has bags of baby arugula, though theirs is a little more spicy.

But be careful at Johnson’s Stand! You will see displayed therein, bags of spinach, labelled “SPINACH”. Even though I know perfectly well that spinach does not grow in Texas in the summer, I was fooled (I think because the summer lettuce had Blown. My. Mind.) into thinking it was Regular Spinach. Of course not, it was New Zealand Spinach, a totally different plant that tastes a little bit like spinach, but actually more like okra, and has okra’s sliminess too. It really is a plant native to New Zealand, meaning that most Americans have never had it. I am not a big fan. I mean, I cooked it and I ate it, because that is how I was raised, but I didn’t enjoy it. In a few weeks we should be getting some autumn lettuce in.

Another little problem that occurred is that, right after I super-recommended Swede Farm Dairy’s Chocolate milk, they didn’t bring any to market the next week. But that was just a problem with chocolate suppliers…they ought to have an AMPLE supply tomorrow! Each gallon of Swede Farm Chocolate milk has a pound of chocolate in it! Try their Chèvre too. I have been having this salad (baby arugula, tomatoes, sweet peppers, sweet onion, cucumber, Swede Farm Chèvre, tapanade, and pine nuts) all week and it is Mah-va-lous. 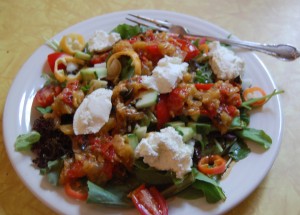 I mean Just Look at it!

Okay, time for the News: There is a new mushroom vendor downtown, 100th Monkey Mushrooms. They sell mushroom kits that enable you to grow your own mushrooms at home (talk about knowing where your food comes from!). I have not yet purchased a mushroom kit, but I am going to tomorrow, after hearing nothing but great things. The kits can grow Shitake, Oyster, and Pioppino mushrooms.

Dewberry Hills Chicken is in the process of expanding. In addition to selling at both the Sunset Valley and Downtown markets, they are now supplying chicken to these local restaurants: Cippolina, Thai Fresh, Siena Ristorante Toscano, Parkside, Trio, Uchiko, Contigo, The Inn Above Onion Creek, Texas French Bread, Dai Due, The Highball, Olive and June, Fab and Rossi, and The Cove. 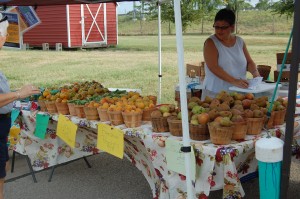 The Pomegranates are in, and Lightsey Farms has them! Lightsey Farms sells Downtown and at several other area markets. You will be able to recognize them by the baskets and baskets of pomegranates (just in time for the traditional dish Chile Rellenos en Nogada, the traditional dish of Dies y Seis en Septembre, which is garnished with pomegranate seeds). I myself have a pomegranate tree that actually does bear fruit in wet years (it has a few on it this year, but not many) and I can tell you from my own experience that you can juice pomegranates easily with an orange squeezer, and make your own Grenadine (as well as regular pomegranate juice to just drink over ice). Pomegranate juice is one of those Super Foods that have a ridiculous amount of antioxidants, and it is delicious. 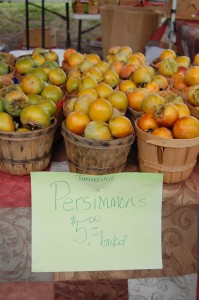 Also, the Persimmons are coming soon! I saw a few of the hard green asian kind last week, the red squishy ones can’t be far behind.

Might still be around: peaches, figs, and cucumbers. Sweet peppers are going for $5 a pound most tables, but you can find them for $4 lb. if you look around. 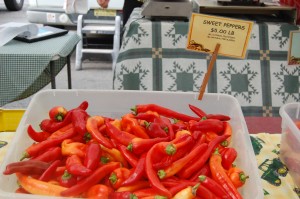 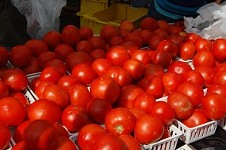