Well, time for the giant frowny-face: No more corn. It's always a brief thing here in Central Texas (we used to never get any!) but, though corn was available as recently as Tuesday at the Eastside SFC market, by today there was no more to be had at the Barton Creek, Sunset Valley, or Downtown markets.

There were also no more plums in evidence. We are hitting the midsummer stride, where the only things that can be counted on are nightshades (tomatoes, peppers, eggplants), okra, squash, and (thank goodness) peaches. Oh, and basil. News from Barton Creek: J & S Seafood has soft-shell crabs again after a brief absence; they have also added Tuna steaks. It might just be my perception, but they seem to have more fillets now, which I like because my filleting skills are nonexistent.

News from Downtown: today there was a pageant, acChildren's parade and pageant, on the theme "Where Does Our Food Come From?" put on by the Theater Action Project. 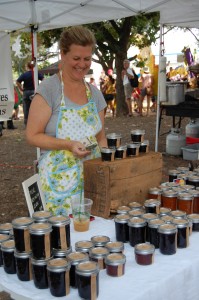 Stephanie McClenny of CONFITURAS fame
Also, in about six week's time Peach Creek Farms (Berkshire Pork) is going to be branching out into beef! They are raising Highland cattle (the variety fancied by the Queen of England) because of the breed's fat marbling. Grass-fed beef tends to be lean and tougher than corn-fed, so the Pages decided on the Highland to produce more tender grass-fed beef. Watch this space to find out when it starts coming to market! 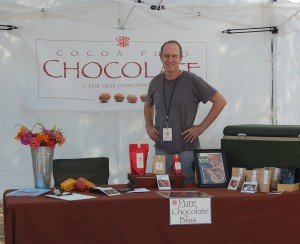 Stephanie McClenny of Confituras is featuring Blueberry-Basil, Wild Plum, Ginger-Peach and Blackberry jams. Apparently she also had Bourbon Brown-Sugar Peach Preserves, but they were gone by the tie I got there!

At the Coco-Puro table, Kakawa Chocolates has breached out into hot chocolate, chocolate almond bars, chocolate gianduja, and several other products in addition to their award-winning and unbelievably great triple chocolate cacao beans. It's nice to see the product line expand because, most of us can only afford the beans every once in a while! New line of Chocolates from Coco-Puro 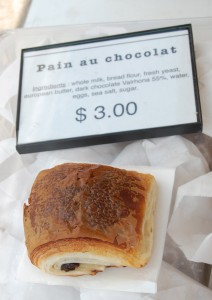 News from Sunset Valley: I always make it to Sunset Valley because this is the only market with bread from Baguette et Chocolat. Their store is located way out in Bee Cave, so it is a place I seldom get to actually visit, but they are at Sunset Valley every Saturday and their bread and croissants are unreal. I give you a picture of their devastated stand … almost nothing left at 11 AM. I managed to get the last loaf of Brioche bread … it's more expensive, ($6) but it lasts all week, has a fine crumb, and is perfect for sandwiches.

Their pain au chocolat has become an obsession with me, I have to have one every week to preserve my even temper. [image-7]It is the only chocolate croissant that isn't too-sweet for me to enjoy at breakfast-time; most others I have tried are too much like dessert. Definitely the best pain au chocolate in town … (Barrie Cullinan still gets my vote for almond, though!)

Farmers Market Report: August 25
What to expect at the farmers markets tomorrow