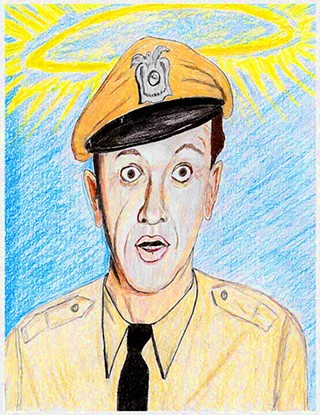 I went to high school in a small town a few hours from Austin. Over the years I have kept in touch with my classmates, but other than my family, I don't have a particularly close relationship with anyone in that town. I keep up with my classmates through email or on Facebook/Instagram and I know generally what they are up to and how they are doing, but mostly we keep a safe distance and I only occasionally run into them during holiday visits. This year, however, is my 40th high school reunion and there has been lots of chatter on Facebook about who is and isn't coming to the reunion. There has also been a lot of chatter about who voted for whom in the last election and it has gotten really ugly at times. It may not surprise you that most of my classmates are strong Trump supporters. I am not. I did not vote for him because basically he is a horrible person. It upsets me to see how many of my classmates still support him and how viciously they attack people like myself who don't. I never would have dreamed 20 years ago that politics would have kept me from attending my reunion, but I think I am going to bow out for this one. Am I being childish? Should I attend anyway and try not to talk about politics?

– Not Attending and Blue

Well Blue, as my old friend Motorcycle Michael used to say, "What are you going to do? People are just no damn good." I should note that he always said that when either he or someone else had really pissed me off, and it only compounded my rage. They say the truth shall set you free but more often than not it just makes you want to throat punch the Almighty. Sure, the creator of heaven and Earth has a few notches in the "win" column, but there's also a lot of solid evidence that he/she/it/they/ze is a colossal fuck-up who has no business running an entire universe.

Sometimes, when I manage to smoke just enough pot to actually stay awake, I entertain thoughts like the following: "What if there is an infinite number of universes and we just happened to get the one universe run by a Barney Fife deity – a soft-headed god who means well, but can barely wipe his own ass?" That would sure explain a few things, wouldn't it? I think we would all expect a whole lot less if we knew our creator was special needs. It would certainly help our sense of karmic equilibrium. "Yes, yes! AMAZING job with the Swiss Alps oh Lord, but then you slipped and wiped out 6 million Jews." I'm thinking that maybe it was the same, well-meaning fuck-up Barney Fife God who created Donald Trump. "Nice job with Obama dear God, but you really shit in the punch bowl with his replacement. Amen."

I get it Blue. I understand your hesitation. I am from a relatively small town too, and in the past year and a half I have had numerous online/meatspace encounters with people who still support and defend the president – often with idiotic, grammarless vitriol – and not one of those exchanges has left me wanting to spend more time with them. In fact, the idea of sitting on dirty pool furniture at a small-town Quality Inn, drinking shit beer and lending a patient, understanding ear while a bunch of D-minus fuckwits expound on political and economic policy into the wee hours of the morning holds no appeal to me whatsoever.

Now, I know that I am painting with a broad, baroque brush here. There are probably plenty of good conversations and times to be had with those old classmates. We could surely go bass fishing ... or cow tipping ... or Okie noodlin'. What I mean is: I know they are basically good people. They just need some more time to prove it. Maybe you should give your classmates some extra time and space to figure it out for themselves. It's not their fault they're slow. They were born into a Barney Fife God's universe.