Fuck-me feminism burst onto the scene in the early Nineties, a camera-friendly movement of well-coiffed feminists lounging in the pages of Esquire. The riot grrrls' fuck-you feminism, on the other hand, was less luxuriant and substantially more fun. Still, both sex-positive schools, aided by sexperts like Susie Bright and Annie Sprinkle, paved the way for a new millennium in which the pronouns have canceled each other out, leaving simply a call to fuck. Meet Gynomite. This feminist spoken-word movement has been around in various forms for the past few years, but seems to have hit its stride since a 1999 Houston revival led by Liz Belile. In Texas, where firearms are more available (and more legal) than vibrators, this story compilation marks an important stage in Gynomite's mission to liberate women "one orgasm at a time."

Gay sex, straight sex, mediocre sex, and raunchy sex -- it's all in here. But what, besides its diversity, makes this porn more feminist than, say, Hustler? It's women telling their own stories, for one thing, and for the most part these particular women are preternaturally self-aware and good-humored. In "An Essay on Sex and Music," Michelle Glaw writes, "A lot of people turn on music when they have sex. I don't. It bugs me." Shaila Dewan does a sensual send-up of the Starr Report. Maggie Estep comes through with an odd story about a man who believes that if he sleeps with a woman she will die.

There is a stereotype that women prefer character development and buildup to out-and-out nastiness; some of the writers in this collection are guilty as charged. Abundant descriptions place some stories (for better or worse) on the near side of the sensual-sexual divide. This means that the analogies are, inevitably, more sophisticated than bananas-and-donuts. Olive Hershey muses that "Being with a new man, making love, is like teaching English as a second language. One thing Dan knew thoroughly and well were verbs. He used a great number, all in the present tense, and not one of them was passive."

Liz Belile will participate in "Sex and the Single Girls: An Erotica Panel" hosted by Spike Gillespie on Wednesday, Feb. 14, at 7pm, at BookPeople. Fellow panelists include Melanie Haupt, Suzy Spencer, and Diane Fleming. 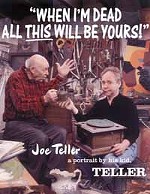 When I'm Dead All This Will Be Yours: Joe Teller, A Portrait by His Kid